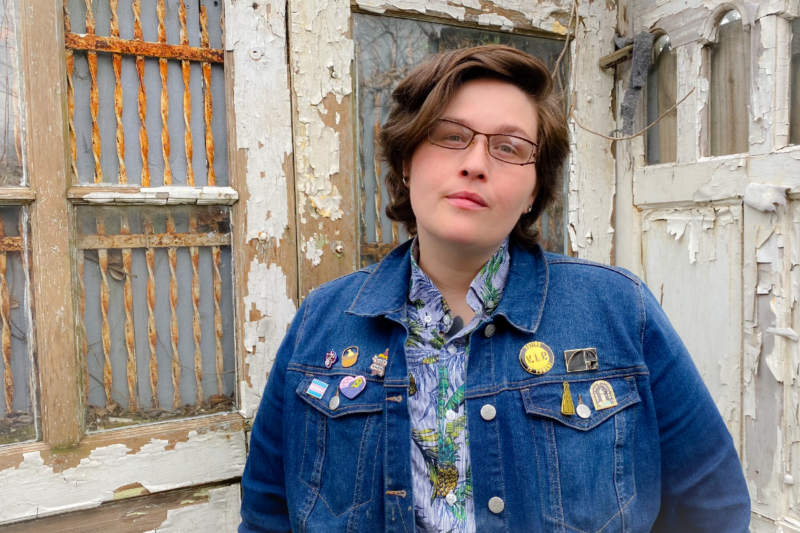 Misgendering is what inspires my most severe dysphoria, not my own self-inspired conflict with my body. Shelda Edwards/Courtesy of KC Bradley

It’s been 14 years since I first told another person I was nonbinary. I chose a new name and slowly began trying on they/them pronouns among trusted friends. By my late 20s, I was coming out in professional circles.

Now, at 37, endometriosis may force me into a medical transition I’m not sure I want.

I’m recovering from a hysterectomy earlier this month, and now I have to make a decision about hormone replacement therapy: stick with estrogen or start testosterone.

How do I choose when I’m more male than female but decidedly neither? Which parts of me do I honor here?

Beginning a medical transition—which can include HRT and a number of different surgery options—is a complicated decision for all transgender people.

Physical and mental health have to be weighed against social and career consequences and the resources needed to start and continue treatments. Transition is expensive, HRT is typically a long-term treatment similar to insulin, and a lack of consistent, high-quality health care is a soaring hurdle.

Somewhere in that decision is a question: “Will it be what I need for myself and others to finally see me?”

In my experience, it’s a harder reflection for gender pirates—the nonbinary, gender-fluid, agender, and others—who sit along and around a spectrum of trans identity and may be just as uncomfortable with the changes brought by HRT as they are with their current forms.

Not everyone wants a medical transition. For those who do, treatment can create or eliminate both dysphoria and euphoria.

I’ve waffled for years debating if it’s worth it for me when testosterone will bring new euphoria alongside new dysphoria.

Now, I’ve lost the luxury of indecision. I know my doctors will want a decision by our April post-op appointments. I believe my health will suffer if I remain undecided.

I just wish the choice was fully mine.

The devil within me

I was diagnosed with endometriosis in 2005 after years of worsening pelvic pain.

In its simplest terms, endometriosis makes your period grow in your abdomen.

Endometrial tissue lines the inside of the uterus. Once a month, it falls away and exits as a menstrual period. With endometriosis, a similar tissue goes rogue and grows freely throughout the abdomen in cysts and patches. It too builds and decays on a monthly cycle. It sticks to and injures healthy tissue, which can cause severe scarring, organ damage, and infertility in the worst cases.

After diagnosis, I moved through all the standard treatments, starting with surgery. I followed it with six months of medical menopause, then a horrific ordeal with hormonal birth control that left me bleeding every day for months.

None solved my symptoms, so I stopped treatment. For 15 years, I continued to avoid the disease spreading through my gut.

There were times I couldn’t treat it. I was poor, unemployed, and uninsured. There were times I was dysphoric and, like many people on and around the trans spectrum, avoided the trauma of a health-care system that is violently binary.

In fall 2020, I returned to the same doctor who diagnosed me. I brought with me a laundry list of severe symptoms.

My periods often last two weeks, and my PMS symptoms last just as long. They come with nausea, headaches, and extreme fatigue. My cramps get so bad I can’t stand.

My gynecologist recommended a total hysterectomy but insisted I see an endocrinologist to treat an unrelated thyroid condition and help me formulate a hormone replacement plan post-surgery, regardless of which direction I wanted to go.

I expected to have to consult with someone in a larger, more progressive city outside the South, but she knew someone in town. She couldn’t see my jaw drop through the mask, but it was there.

The trouble with choices

In January, I met with the endocrinologist and we walked through my options.

I could keep my ovaries, which would continue making their own estrogen and progesterone, but doing so increases the risk of ovarian cancer. I took that off the table.

Without them, I could forgo any HRT and go through menopause over the next year or so. My endocrinologist thinks it’s fine, but my gynecologist and my own initial research disagree.

At my age, estrogen deficiency is more likely to lead to depression, memory loss, osteoporosis, sexual dysfunction, and an increased chance of heart attack and stroke. There’s debate on the safety of estrogen replacement, but people under 60 are lower-risk.

It’s fine for the short-term, but I don’t think forgoing all HRT is right for me.

That leaves two choices. I could start estrogen replacement. (I’d eventually stop taking it and go through menopause at a more typical age.) Or I can replace the estrogen with testosterone.

On testosterone, I’d have to watch for high blood pressure and cholesterol. It can increase chances of heart attack, though that’s more of an issue for trans women. A basic healthy diet and regular physical activity can usually keep the negative effects of testosterone in check.

I’m more concerned with the mental health ramifications. For most trans men, starting HRT brings outward changes they’d hoped for in their first puberty, like facial hair, a deeper voice, and a more masculine shape. For me, it’s a mixed bag.

I’ve fantasized my entire life about a deeper voice and a flat chest. A part of me is downright giddy at the prospect of finally pulling the trigger on testosterone. But many of the physical changes could spawn new dysphoria.

I could customize a lower dose of testosterone to limit its effects, but some of the first changes it brings—like body hair and genital changes—are least desirable for me.

For as much as I’m unsure about testosterone, I’m positive I don’t want to take estrogen. The thought of it, even in a low dose, is wildly unsettling. I can accept that my body produces this hormone, but there’s something about purposefully dosing myself that makes my stomach twist.

Ultimately, I’m scared testosterone could be the wrong choice, but I think it’s the best I have left.

I was nine years old the first time I wanted the world to see me as a boy. My father said a shooting range was no place for a girl, and I didn’t understand why that meant I couldn’t go. I wasn’t a girl. I wasn’t always a boy either, but there were only two options so I chose that one by default.

I cut my hair short, refused to wear girls’ clothes, and only wore one earring so folks would know I was both a boy and totally rad. One day at school, two girls read me as a boy and said I was cute. My entire self buzzed with joy for days.

My parents put me in counseling for what was then called gender identity disorder, but I refused to speak. The therapist kept asking if I thought I was a boy or if I wished I had a penis. At nine, I couldn’t begin to explain that I was something else all together and I’d be just fine if the world would loosen up a little.

Almost 30 years later, misgendering is still what inspires my most severe dysphoria, not my own self-inspired conflict with my body.

In the South, the “ma’am”s are plentiful and emotionally exhausting, and my pronouns are a challenge for all but a handful of people. Testosterone wouldn’t fully fix my social dysphoria, but it would lessen the blows. I would rather be wrongly “sir”ed than wrongly “ma’am”ed.

I still feel like that kid who’s forced to choose the best of two wrongs.

Most days, I appreciate the curve of my hips. I’m on good terms with my genitalia. On rare occasions, I feel definitively female and the core of me is at peace with my entire body.

I don’t want to lose those pieces of me for the sake of society, no matter how small they might be. I’m resentful at the very idea of it.

I want to know that whatever choice I make is fully my own.

Will it be worth it? Will it be what I need for myself and others to finally see me?

I don’t know. What I need is a moving target.