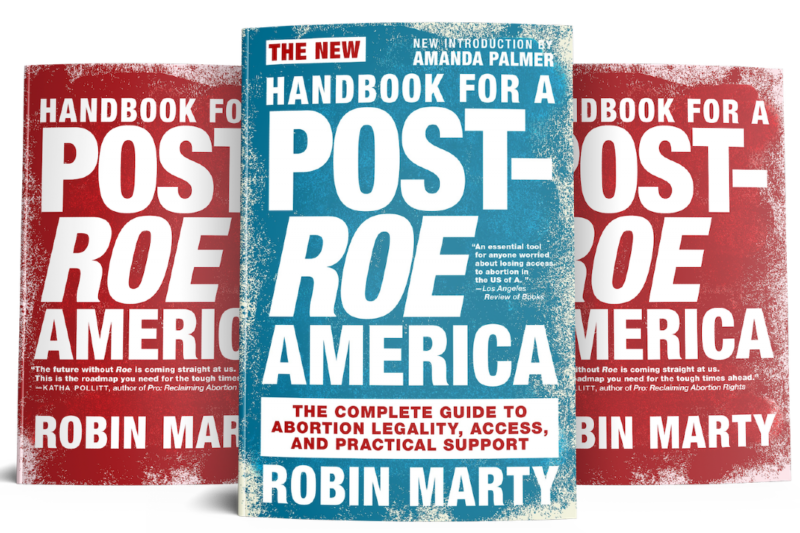 A moral objection by a minority of Americans to the legal act of terminating a pregnancy has become an issue so sacrosanct that abortion has been removed line by line from the entire U.S. tax code. Courtesy of Seven Stories Press

Abortion opponents are especially good at changing public opinion, usually by reframing abortion rights in harmful or stigmatizing language. You’ll find their words in right-wing media stories, in letters to the editor, in the comments sections of online news sites, and, of course, all over social media.

That leaves abortion rights supporters with the unenviable job of correcting the record. Need a little help? Here are some explanations of the right’s favorite talking points:

At what point is a fetus or embryo capable of feeling pain? It depends who you ask—and no, I’m not talking about doctors or mainstream medical professionals. Anti-abortion activists themselves constantly change their minds about when they believe a fetus feels pain, manipulating the dates depending on which abortion restriction they are trying to pass at the time.

Depending on which bill they are trying to promote, abortion opponents will say that a fetus can feel pain at 22 weeks’ gestation or at 15 weeks’ gestation. The anti-abortion research group Charlotte Lozier Institute even offers a fact sheet that provides justifications for claiming fetal or embryonic pain can be felt at 20, ten, or a mere six weeks

None of the literature cited in these reports comes from mainstream organizations like the American College of Obstetricians and Gynecologists, the American Medical Association, or the Royal College of Obstetricians and Gynaecologists. These major medical associations all agree that while the receptors necessary to eventually feel pain do develop at the points anti-abortion activists claim, the system as a whole is incapable of transmitting any pain until all structures are in place and operating—including the brain, which isn’t fully developed until some point near the third trimester.

While abortion rights supporters fight in state legislatures to protect access in case Roe is overturned, abortion opponents claim pro-choice legislators are championing “infanticide.” But in order to make their argument work, anti-abortion activists often manipulate the public perception around the idea of viability.

“Viability” refers to the point at which a fetus—if delivered—would be capable of surviving outside the womb with the assistance of life support. As technology has improved, that marker has dramatically decreased, moving from around the third trimester back when Roe was decided in the 1970s to as early as 22 weeks’ gestation today.

Now, viability does not mean every fetus will survive at that point in gestation. It also doesn’t mean every one that does survive will do so without severe medical issues. What “viability” does do is serve as a point at which doctors who are dealing with premature labor of a wanted pregnancy can offer medical intervention for the fetus to increase chances of survival, versus knowing that providing care is futile and would only cause more harm.

That’s where the right takes advantage of the language. A fetus that is delivered at 18 weeks has no possibility of survival. But that doesn’t mean it will not be “born alive.” Viability is based primarily on lung development, and a fetus’s lungs prior to about 22 weeks’ gestation lack the surfactant necessary for them to inflate and deflate without tears or collapse. The production of this surfactant begins at around 20 weeks, and can be accelerated with medication once it starts, but it cannot be produced prior to 20 weeks.

Abortion opponents will tell stories in Congress, in state houses, in television interviews and campaign commercials about “babies born alive and left gasping rather than being offered medical care.” But the reality is that providing oxygen to a fetus whose lungs are not yet able to inflate and deflate will do nothing other than cause more harm. But when doctors don’t provide medical care, the right then accuses them of promoting “infanticide.”

The simple truth is there is no clear line for viability. It differs for every fetus, based on prenatal health, genetics, gestational age, weight, and even gender. But nuance is hard to debate, and abortion opponents rely on that fact in order to manipulate public perception.

It used to be that the idea of “taxpayer-funded abortion” was relegated to the Hyde Amendment, which originally forbade people on Medicaid from using their insurance to pay for an abortion. But now this phrase has been expanded to encompass any situation where a person could claim that taxes are being used to pay for something related to an abortion.

The Helms Amendment, a companion to Hyde, forbids any person who is in the military or who gets their medical care through military services from being able to obtain an abortion—it even blocks military bases from providing abortions. This has a devastating effect on military families, especially those who may be deployed overseas and in countries where abortion is difficult to find or outright illegal.

But Hyde has also been used to block those who work for the government from using their insurance to pay for abortions, effectively stopping government employees from having the procedure covered. And during the 2009 battle over the Affordable Health Act, Hyde was used to stop insurance plans on the state and federal health exchanges from covering abortion. While a handful of states made it mandatory for all plans offered in their state exchanges to cover reproductive health care, regardless of the type, Republicans not only sought to block abortion coverage for most states but also sued to ensure there was at least one insurance plan in every state that didn’t cover abortion.

Insurance coverage isn’t the only area where the far right makes overzealous claims of “taxpayer-funded abortion.” Conservatives have created increasingly convoluted claims of “fungible funding” to argue that taxpayers are financially supporting abortion services by providing Title X funding (federal funds to support birth control for low income and uninsured individuals) to Planned Parenthood affiliates. These accusations have escalated since 2010, despite the fact that the organization has been required for decades to produce reports proving their contraceptive programs are kept separate from any abortion services.

To eliminate any possibility of “taxpayer-funded” abortion, the Trump administration passed a new rule in early 2019 that forbids any entity that is associated with, recommends, or even mentions abortion from receiving any Title X funding. This “ultra gag rule” was introduced under the guise that any rent, utility bill, band-aid, or photocopy subsidized by the government somehow frees up a dollar that could then be used for an abortion. By demanding entities that discuss or offer abortion have complete physical separation from any clinic given funding for contraception, conservatives argued that only complete isolation of Title X funding could guarantee not one dollar inadvertently “funded” an abortion.

If that isn’t a big enough stretch, the “taxpayer-funded” abortion trope is used in the same way to stop abortion providers from being able to operate in states that require medically unnecessary admitting privileges or transfer agreements in order to maintain a license.

One example is Ohio, where the legislature passed a law requiring all abortion clinics to have a transfer agreement with a nearby hospital. Unsurprisingly, many hospitals refused to offer privileges because they were religious-based private institutions that “morally” objected to the procedure. But the state next made a rule that public and university hospitals could not offer transfer agreements either, because they were subsidized with tax funding. Providing a transfer agreement that would allow abortion clinics to operate—the state theorized—would then be taxpayer funding of abortion. Clinics were left with only one option: finding a local, nonreligious, non–publicly funded hospital that would work with them.

Prior to these rules, Ohio had nearly 20 clinics. Today, they have eight.

Taxpayers will always be forced to fund programs they disagree with. Taxes fund wars, jails, bailouts for the rich, stadiums and sports arenas, and all sorts of programs many oppose. Yet somehow a moral objection by a minority of Americans to the legal act of terminating a pregnancy has become an issue so sacrosanct that abortion has been removed line by line from the entire U.S. tax code. That’s not a reasonable moral objection, that’s weaponizing a political view.

Reprinted from The New Handbook for a Post-Roe America with permission.