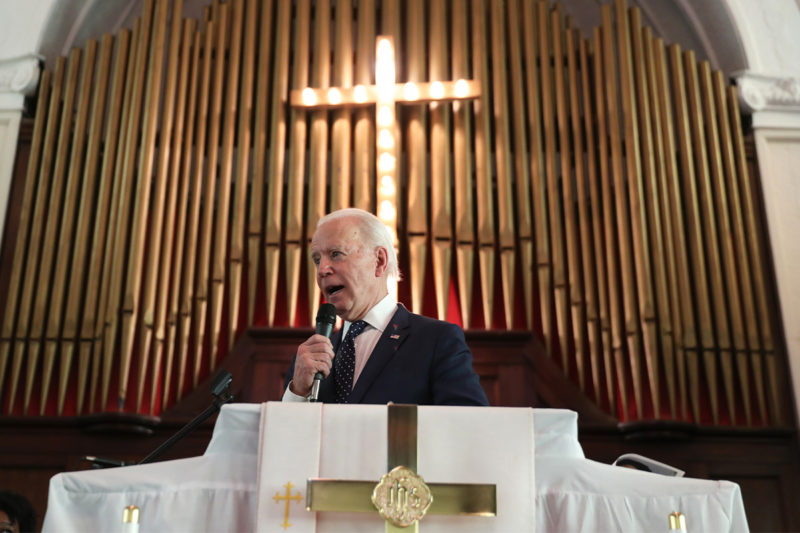 While President Joe Biden has rescinded the global "gag rule" and has moved to fund the United Nations Population Fund, which Trump defunded, his administration still has yet to use the word abortion. Joe Raedle/Getty Images

Those of us who struggle for reproductive rights were relieved late last month when President Joe Biden, like every recently sworn-in Democratic president since Bill Clinton, issued an executive action rescinding the global “gag rule.” The gag rule is an executive action originally issued by Ronald Reagan—and reinstated by every newly sworn-in Republican president after him—that prohibits U.S. funding for foreign nongovernmental organizations (NGOs) that provide abortion services, offer referrals for them, or otherwise advocate for access to them.

Former President Trump expanded the gag rule to apply to all U.S. global health aid, not just U.S. family planning assistance. Moreover, Trump’s version of the policy extended to not only all foreign recipients of U.S. global health funding, but any abortion-access-supporting organization that receives financial help from one of those U.S.-funded foreign NGOs.

Most presidents take action on the global gag rule on Inauguration Day, so there was concern among the reproductive rights community when Biden waited over a week to issue the memorandum. Those worries had been intensified on Inauguration Day evening when White House press secretary Jen Psaki, in her first press conference, alluded to Biden’s Catholic faith in an opaque response to a question from a right-wing Catholic journalist about the gag rule.

There were hints that Biden might be irresolute on reproductive rights even before the election. The word abortion was not uttered once at the Democratic National Convention, and the event featured a benediction from a Catholic priest who prayed for “the unborn child in the womb.”

After Biden’s election, the United States Conference of Catholic Bishops announced at their annual meeting that they would create a special “working group” to address “the difficult and complex” situation that has arisen with a Catholic president who supports policies that are against church teaching.

Biden’s positions on abortion, gender, and same-sex marriage “creates confusion with the faithful about what the church actually teaches on these questions,” Los Angeles Archbishop José Gomez, president of the U.S. bishops’ conference, said at the time. The archbishop wrote an open letter to Biden on January 20 reiterating his concerns. And there has been a spirited and uncharacteristically public debate among bishops over whether Biden, who attends Mass faithfully, should be denied communion for his pro-choice position.

Is all of this pressure impinging on Biden’s commitment to ensuring abortion rights? The answer remains unclear. While Biden has rescinded the gag rule and has moved to fund the United Nations Population Fund, which Trump defunded, his administration still has yet to use the word abortion, including in a statement on the 48th anniversary of Roe v. Wade.

As the president of Catholics for Choice, an organization that represents the 60 percent of Catholics in the United States who believe abortion should be legal, I encourage President Biden to appeal to the Catholic social justice tradition as he discerns how to move forward with protecting reproductive freedom in his policies both at home and abroad.

Biden has consistently connected his care for the poor, the sick, and the vulnerable to his Catholic faith. As a longtime champion of women’s rights and the rights of marginalized people, Biden surely understands that policies like the global gag rule, the Hyde Amendment, and the Helms Amendment inflict disproportionate suffering on the poorest of the poor, those afflicted by illness related to reproductive health, those in rural areas with limited resources, and those who find themselves in states of profound powerlessness.

Biden must use his conscience and his commitment to human rights … by acknowledging that abortion access is a Catholic social justice value and working to improve access to it.

The global gag rule is a catastrophe for human rights. Not only does it lead to more unplanned pregnancies, more unsafe abortions, and higher rates of maternal mortality, it puts millions of people around the world—primarily poor women—at fatal risk because they receive other lifesaving health care from these same organizations that lose U.S. funding for ensuring pregnant people have access to reproductive health care. Overturning this policy is a matter of life or death for the countless women and people of marginalized genders who are desperately poor, sick, and sick-unto-death because they were not given access to basic reproductive health care and were denied the ability to make reproductive health decisions for themselves and their families.

President Biden has dissented from Catholic teaching on issues related to marriage equality, transgender rights, and contraception because he realizes that the church’s teachings on these topics do not reflect the church’s greater call to justice, equality, and human dignity. He must use his conscience and his commitment to human rights in the same way by acknowledging that abortion access is a Catholic social justice value and working to improve access to it.

As someone formed by Catholic education, Biden should hold in his heart two fundamental Catholic teachings in his approach to abortion rights. The first is the primacy of conscience, which teaches that Catholics must use their reason and individual consciences in all moral decision-making. The second is the Catholic belief in a preferential option for the poor, which states that caring for the well-being of the most disadvantaged must be our first priority. Access to abortion care is deeply intertwined with and exacerbated by systemic racism, economic insecurity, and immigration status. For these reasons, we ask Biden to prioritize protecting abortion access as part of these other priorities identified by his administration.

He can do this by calling for Congress to pass the Global Health, Empowerment, and Rights (HER) Act. Because every Democratic administration has rescinded the global gag rule, and every subsequent Republican administration after Reagan has reinstated it, White House turnovers put millions of people around the world into extraordinary risk of egregious suffering and death. Passing the Global HER Act would enshrine protections in federal law for U.S.-funded reproductive health care by foreign NGOs, so that future presidents could not reinstate the gag rule with an executive action. Millions of lives would be saved with this legislation. It would, indeed, protect the sanctity of life.

At Catholics for Choice, we understand that abortion can be a complex moral issue. But perpetuating the U.S. bishops’ strategy of making abortion a taboo topic only exacerbates the harmful stigma the church has attached to it for far too long. As one of the tens of millions of U.S. Catholics who supports abortion rights, Biden has the opportunity to demonstrate to this deeply divided country that people of faith not only can support abortion rights, they do so as an expression of a commitment to justice that is grounded in their religious belief.