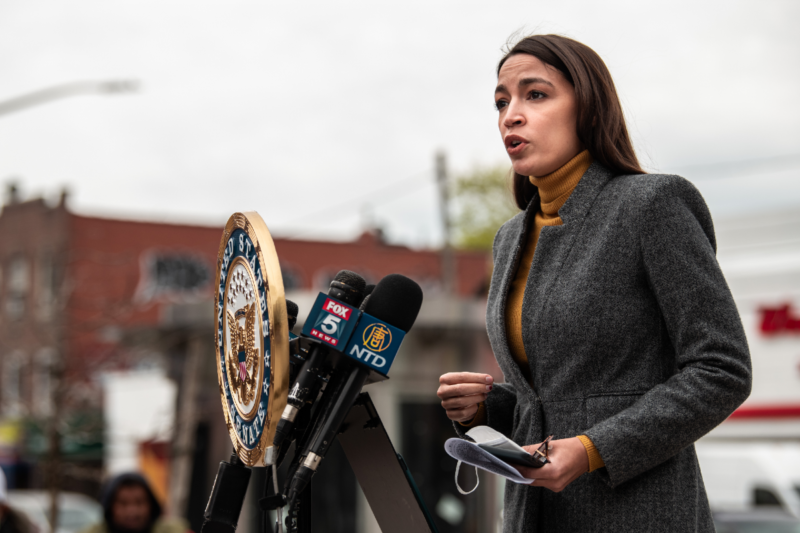 Many of us constantly feel, in some ways, like Alexandria Ocasio-Cortez during the Capitol siege: running frantically from room to room; looking for a safe place to hide; calculating the distance to the nearest exit; looking for the right shoes to carry us to safety. Scott Heins/Getty Images

For abortion advocates, hearing Rep. Alexandria Ocasio-Cortez share the trauma she endured during the Capitol insurrection, while revealing that she is a sexual assault survivor, was all too familiar.

After Ocasio-Cortez shared these often heartbreaking and excruciating details in a nearly 90-minute Instagram Live video on Monday night, the sentiments of support and solidarity were almost immediate—as was the inevitable backlash.

“These folks who tell us to move on, that it’s not a big deal, that we should forget what’s happened, or even telling us to apologize—these are the same tactics of abusers. And I’m a survivor of sexual assault,” Ocasio-Cortez said. “I haven’t told many people that in my life. But when we go through trauma, trauma compounds on each other.”

Michael Tracey, a self-described roving journalist, tweeted that he took that as “a masterclass in emotional manipulation. A genuine political/rhetorical skill. Gotta hand it to her.”

Tracey followed up his (tired and all-too-expected) comment with a series of defensive tweets, including one that read: “To all those lashing out in deliberate bad faith, I wasn’t specifically referring to her sexual assault claim here—but rather to the entire interweaving presentation, where invoking ‘trauma’ automatically mandates accepting a politician’s incendiary claims at face value.”

What exactly Tracey considers to be “incendiary” about a member of Congress fearing for her life during a coup attempt that left at least five people dead remains to be seen. What is more familiar—especially to abortion storytellers and other advocates within the abortion rights, reproductive justice, anti-sexual assault, and anti-domestic violence movements—is the idea that disclosing multiple traumatic events simultaneously could only be a carefully calculated “presentation,” instead of an accurate representation of the lives of many people in this country, especially Black people, brown people, LGBTQ people, and people who can get pregnant.

In other words, advocates have heard all of this before.

“People have always used public storytelling as a way to be vulnerable about horrific or challenging experiences they’ve had, particularly those created by unjust systems, racism, misogyny, xenophobia, and more,” said Renee Bracey Sherman, executive director of We Testify, an organization supporting the leadership and representation of people who have abortions.

“Those in power know how difficult it can be to share those truths, so when people do speak out, they attack those people viciously to discourage other people from feeling the courage to speak up. This happens to sexual assault survivors, abuse survivors, those who encounter racism, and abortion storytellers. The abusers dismiss us outright and label us as ‘liars’ or that we’re exaggerating so that they can dismiss our claims and continue to move forward without creating any change or being held accountable,” Bracey Sherman said.

Yet statistics alone suggest that many of us exist under the banner of multiple traumatic events. Nearly 1 in 5 women have been sexually assaulted; 1 in 4 pregnancies end in miscarriage; nearly 10 percent of women in the United States have trouble getting pregnant; seven out of every 1,000 women experience both pregnancy and childbirth complications; 21.4 million women live in poverty; and 1 in 4 women experience physical violence at the hands of an intimate partner. And so movements focused on expanding abortion access, ensuring true reproductive freedom, and eradicating gender-based violence are bound to involve people who can speak to the impact of multiple traumatic events simultaneously.

In truth, storytellers within these movements are burdened by compounded trauma because these movements are interconnected: all a byproduct of systemic inequalities that exist and persist within a society built on a foundation of sexism and racism; all existing under the banner of the constitutional promise of an opportunity at “life, liberty, and the pursuit of happiness,” but only if you’re white, affluent, male, and credible.

“For those of us who share our stories publicly, we never know if what we say will resonate with others,” Alison Turkos, a multiple sexual assault survivor and a feminist activist, tells Rewire News Group. “We share our stories for ourselves; for others who have experienced something similar. Survivors of sexual assault are forced to contort to a ‘perfect victim’ narrative. Forced to prove our credibility over and over again.”

A woman sharing her abortion story might choose to invoke the trauma of intimate partner violence to show just how important it is to be able to access abortion services. She is not deploying a “manipulation tactic.” Instead, she is describing the reality for far too many pregnant people in this country.

A trans woman lobbying her elected officials for health-care equity might decide to share her #MeToo story to highlight how important it is for trans people to have access to safe, reliable, and respectful medical care. That’s not an “interweaving presentation.” Sadly, it’s a reality for far too many trans people in this country, a reported 47 percent of whom have been sexually assaulted at some point in their lives, and 57 percent of whom say they’re uncomfortable asking the police for help.

A teenager fighting to eradicate parental consent laws that make it nearly impossible for those under 18 to access birth control, abortion, and other reproductive health services might decide to reveal painful instances of child abuse to highlight the danger of these laws. That’s not a “trauma-related political demand.” Rather, it’s a reality for far too many young people in this country. Nearly 700,000 children are victims of abuse or neglect each year, and that’s likely an undercount. Currently, 37 states require parental involvement in a minor’s decision to have an abortion.

What is apparently so beyond the realm of possibility to someone like Tracey is an inescapable part of life for many people in this country, especially those with multiple marginalized identities. And this is what needs to be made clear to those still sitting on the sidelines in the fight for true equality—that violence against Black, brown, LGBTQ, pregnant, and other historically vilified bodies is not a one-time-only transaction, but a constant, looming possibility.

Many of us constantly feel, in some ways, like Ocasio-Cortez on January 6: running frantically from room to room; looking for a safe place to hide; calculating the distance to the nearest exit; looking for the right shoes to carry us to safety.

We share our stories not to be manipulative, but to survive.