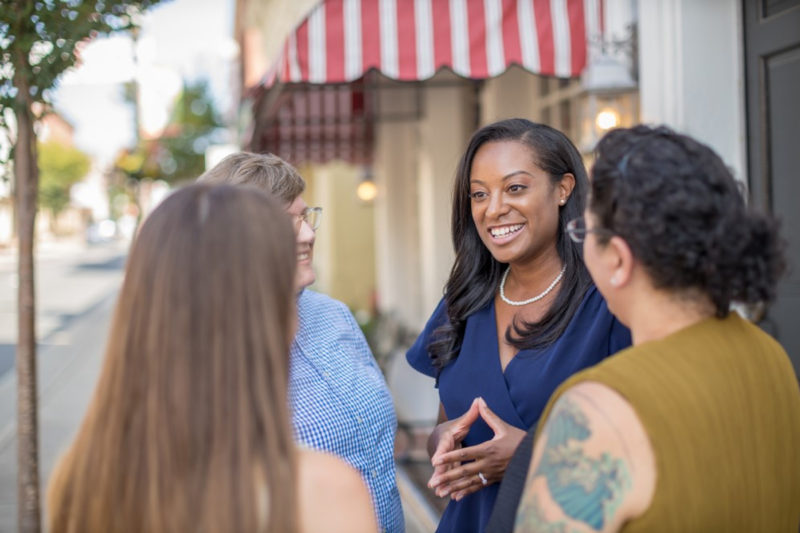 Jennifer Carroll Foy, a gubernatorial candidate in Virginia, isn’t ready to breathe a sigh of relief now that Donald Trump is no longer president of the United States. The mom of two, who was one of the first Black women to graduate from the Virginia Military Institute before she became a magistrate judge, public defender, and delegate in the Virginia General Assembly, knows that attacks on abortion rights persist, regardless of who’s in the Oval Office.

“I have heard this sentiment that now that we have a Democratic White House and Congress—there’s not much to worry about,” Carroll Foy told Rewire News Group. “But we cannot be complacent. With the stacking of the federal judiciary with judges hostile to our fundamental rights, Roe v. Wade and the legal right to abortion is in jeopardy. With the Supreme Court—including Amy Coney Barrett, Brett Kavanaugh, and Clarence Thomas—salivating at the opportunity to repeal Roe v. Wade, now is the time to do everything we can to shore up these rights.”

“I have seen firsthand the ramifications of what happens when people take advantage of communities, especially communities of color and of low socioeconomic status,” Carroll Foy said. “Right now, there is a fake abortion clinic in my hometown spewing out falsehoods about abortion and reproductive health to people just trying to get help and information. When that happens, it says that we aren’t capable of making our own decisions: that we aren’t entitled to the right to control our own bodies or are able to make our own decisions. And those types of attacks are attacks on all of us.”

There are as many as 4,000 so-called crisis pregnancy centers across the country—fake clinics that misrepresent themselves and lie to pregnant people about the gestational age of their pregnancy, about their options, and about abortion care, including how safe abortions are and how abortions are performed. The majority of them are strategically placed in primarily Black and brown communities.

“Most of my family still lives in Petersburg,” Carroll Foy said. “I want my kids to grow up in a community where they are not on the receiving end of this misinformation—that they’re not targeted or seen as being more susceptible to those types of tactics. That they’ll be entrusted to make decisions about when and if they want to start a family, and what that looks like.”

Many of these deceptive anti-choice centers have received federal loans and other grants that keep them staffed and afloat, while actual health-care clinics that provide abortion are shut down due to TRAP laws, or targeted regulations of abortion providers. In just five years, from 2011 to 2016, 162 clinics that provided abortion services closed. Only 22 opened. In 27 major U.S. cities, people have to travel at least 100 miles to reach the nearest abortion clinic.

For a large majority of this country—especially Black, brown, and poor people—Roe v. Wade exists in name only, a protection afforded only to the white and affluent. Meanwhile, Black and brown people are offered faux science by anti-abortion activists masquerading as morally sound, informative medical professionals.

Carroll Foy is ready for that to change. And she’s starting at home.

When she represented the 2nd District in Virginia’s House of Delegates, Carroll Foy fought to expand Medicaid coverage for 400,000 Virginians, helped Virginia become the final state needed to ratify the Equal Rights Amendment, and worked to pass the Reproductive Health Protection Act, which removed politically motivated and medically unnecessary barriers between people seeking abortion care and their doctors.

But the work is not done. As governor, Carroll Foy has vowed to appoint an all pro-choice cabinet. She’s the first gubernatorial candidate in the country to make such a promise.

“Reproductive freedom and justice impacts all parts of a person’s life,” Carroll Foy said. “When we think about reproductive freedom we have to think about it holistically. To have an all pro-choice cabinet would mean that we are all on the same page as far as understanding the intersectionality of access to reproductive health care and abortion rights and how it crosses over into so many other sectors of our lives.”

“It’s not just a statement—it’s a mission,” she continued. “We see ourselves, and I see myself, as that firewall, that barrier, protecting people. I want to make sure that I have a cabinet that is in full support of that mission. We will do everything we can to ensure abortion rights and access to reproductive health care in the commonwealth.”

Carroll Foy is also dedicated to expanding abortion access and other reproductive health-care services for LGBTQ people, who are also disproportionately impacted by anti-abortion laws. She lobbied and helped pass the Virginia Values Act, a law that bans discrimination against LGBTQ people when it comes to housing, employment, public places, and credit applications.

“What goes hand-in-hand with [reproductive justice] that a lot of people don’t talk about is working to strengthen and protect trans rights,” she said. “We have to go a step further and say that trans people also need equitable access to health care, including reproductive health care. The Jennifer Carroll Foy administration will make trans rights a top priority because until all of our rights are secure, none of our rights are secure.”

Virginia and New Jersey are the only two states electing a governor this year. The Democratic gubernatorial candidates in Virginia—reported by the Associated Press as “more diverse than anytime in modern history”—also include Lt. Gov. Justin Fairfax, state Sen. Jennifer McClellan (both of whom are also Black), state Del. Lee Carter, and former Virginia Gov. Terry McAuliffe.

Carroll Foy hopes that after the nation watched Georgia turn blue, and cheered as Black women—once again—handed Democrats not only the presidency but also the Senate, that sentiments about lifting up, protecting, and listening to Black women will manifest in real, tangible action to not only protect Roe, but expand access to abortion care for everyone, especially the Black and brown people who are disproportionately impacted by anti-abortion laws.

“There are sentiments—well-deserved, well-earned sentiments—of standing with Black women and trusting Black women,” she said. “But we need people’s bills and budgets to reflect those same values. We need not just advocacy, but action. And until that happens, there’s still that lack of respect and of us being treated fairly and equally. And that’s what this is all about. It’s about elevating all voices. It’s about ensuring all people have access to abortion care, no matter how much is in their checking account, what their ZIP code is, or who they love.”