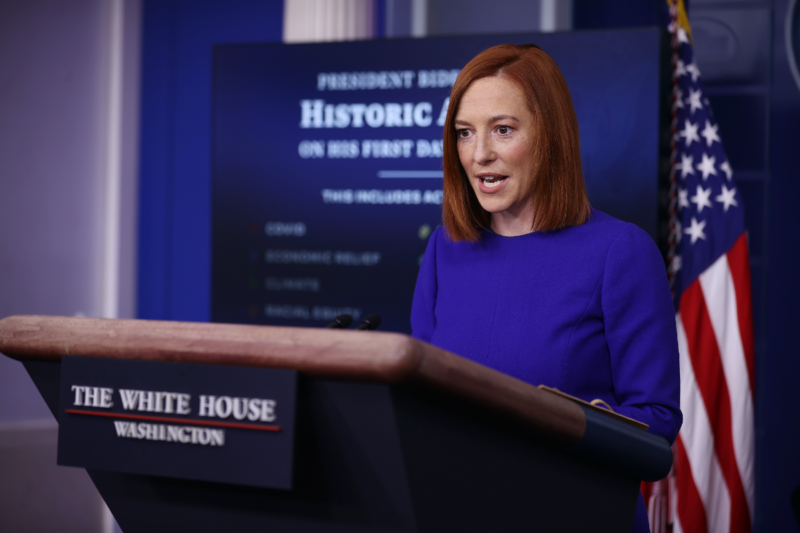 We need to discuss abortion like we do student loans, the economy, or climate change—by saying those words, and speaking about the policy and the people impacted. Chip Somodevilla/Getty Images

Everyone, say it with me: abortion. Trust me: It feels good to say. Abortion.

On Wednesday evening, President Joe Biden’s press secretary, Jen Psaki, stood in the briefing room for the first time, fielding questions from reporters and actually answering them. What a concept. Her answers were direct, unapologetic, and factual—that is until she was asked a question about abortion.

Eternal Word Television Network reporter Owen Jensen asked Psaki about the Hyde Amendment—which bars federal funds from being used for abortion except in cases of rape, incest, or life endangerment—and Trump’s expansion of the global “gag rule”—a policy that blocks foreign aid for nongovernmental organizations that provide or even talk about abortions. (The global gag rule is also known as the Mexico City policy; it was first announced in Mexico City in 1984 during the Reagan administration.) Jensen called them “two big concerns for pro-life America.”

“Well, I think we’ll have more to say on the Mexico City policy in the coming days,” Psaki replied. “But I will just take the opportunity to remind all of you that he is a devout Catholic and somebody who attends church regularly. … He started his day attending church with his family this morning. But I don’t have anything more for you on that.”

Not exactly the full-throated defense of abortion access we would hope for. Reproductive rights advocates were quick to pounce on the flaccid response, arguing that it appeared as if Psaki was kowtowing to the Catholic right wing, instead of standing firm on abortion access. After all, Biden’s faith is irrelevant to the abortion conversation in the first place. And more importantly, Psaki should have pointed out that the vast majority of Catholics, like Joe Biden, are pro-choice. Many have even had abortions!

What’s more, Psaki’s answer illustrated a longstanding problem among liberals and progressives: saying the word abortion. We saw it at the presidential debates; we’ve seen it in electoral politics for years. Politicians use words like “choice” and “reproductive health”—anything to avoid saying the word a-bor-tion. Abortion is too often treated as the third rail of politics: scandalized, stigmatized, and made taboo. Psaki took question after question without missing a beat, holding her ground on the administration’s policies. And her answer to Jensen’s question should have been no exception.

Psaki should have answered it like she would a question about student loans, or the economy, or climate change—by saying those words, and speaking about the policy and the people impacted. Instead she acted like the matter at hand was something to be sidestepped or treated with kid gloves.

It’s possible that Psaki was trying to avoid lending legitimacy to the question or EWTN itself, which was credentialed under Trump, and which has a longstanding reputation of right-wing zealotry. But without that context, her answer looked and sounded like a cop-out.

But here’s what’s odd: We have Biden’s answer on the question about the global gag rule. Ahead of the inauguration, the Biden-Harris administration released a list of planned executive orders, including one repealing the global gag rule. That is what Psaki was alluding to when she said there was more to come on that issue. But she should have just said that then.

And this ambiguity is likely why Dr. Fauci, everyone’s favorite pocket-size Italian, came out on Thursday morning and reaffirmed the administration’s commitment to reproductive health. “President Biden will be revoking the Mexico City policy in the coming days, as part of his broader commitment to protect women’s health and advance gender equality at home and around the world,” Fauci said in a speech to the World Health Organization.

Psaki could’ve said something like: “Biden announced this morning that he would be rescinding the Mexico City policy; like the majority of Catholics in the United States, President Biden is pro-choice.”

I wish I could chalk this up to a first-day fluke, but Psaki made a similar blunder on Friday when she was asked about Vice President Harris’ abortion platform during her campaign. She dodged the question by saying that those were Harris’ policies, and adding that she had nothing more to say on the issue.

Certainly, Psaki may not have wanted to get into a messaging war with Republicans about abortionduring the first week of Biden’s presidency, especially given the Biden-Harris administration’s stated commitment to reproductive rights.

In its first week, the administration dropped nearly a dozen executive orders addressing a range of issues central to reproductive justice.

Still, saying that abortion is good medicine is no more controversial than saying climate change is real, or wearing a mask saves lives. And the administration has spent a lot of time on sending a message about truth, facts, and science—about listening to the experts and prioritizing the health of people in the United States. By capitulating to gotcha questions about abortion, Psaki failed to live up to that promise.