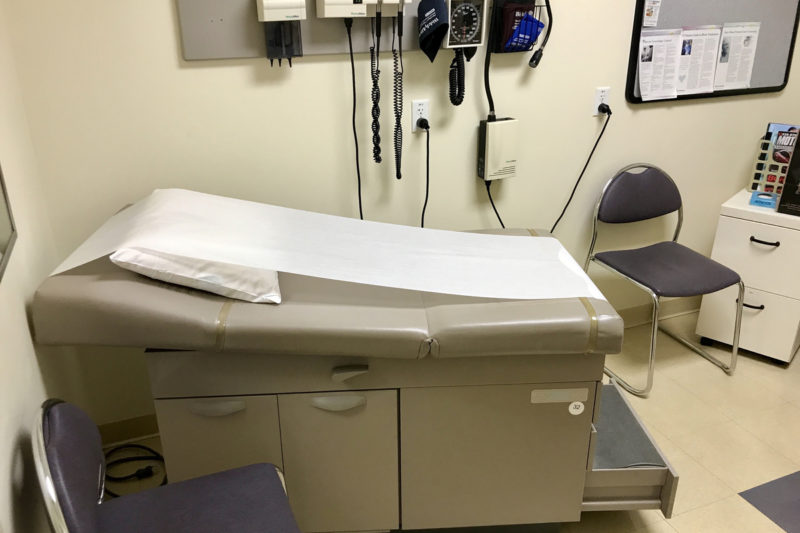 Discrimination, or misgendering and deadnaming by medical professionals, often leads trans people to hide who we are from health-care providers or give up on advocating for ourselves. Shutterstock

As a reporter specializing in reproductive justice and health, I’ve interviewed dozens of OB-GYNs and reproductive health-care providers. Even though most of them know I am nonbinary, and my pronouns are they/them, they still refer to Pap smears, breast exams, and abortion as “women’s care.” When they talk about hypothetical patients, they use she/her pronouns. “She should be able to get the care she needs,” they say.

I jot down notes and nod along during interviews, thinking of the times I’ve put off reproductive care because I know it will mean two hours of misgendering and dysphoria. Women do deserve to get the care they need, but so do trans and nonbinary people, and the latter often delay or don’t receive necessary medical care because it excludes them. The exclusionary language used by OB-GYNs captures how the medical system can’t treat transgender people when it refuses to acknowledge us.

Sometimes I ask the physicians I interview to use gender-neutral language that includes people like me who aren’t women but need “women’s health care.” I make a point of using “patients” and phrases like “people who need reproductive care” or “people who need abortions.” Sometimes the physicians are receptive; sometimes they don’t acknowledge what I’ve said. And sometimes, I go along with the gendered language because I’m too tired to call attention to the fact that I don’t fit.

It’s true that cisgender women receive the bulk of abortions and reproductive health care, but using language that excludes transgender folks only further contributes to their erasure. Exclusive language isn’t bad just because it makes people feel left out, it also results in health disparities. When physicians don’t recognize trans people in their language, they can’t—and sometimes won’t—adequately treat them. As Sirry Alang, associate professor of sociology at Lehigh University, once told me, language shows who and what we value. And who we talk about and value determines who receives support and resources.

When medical professionals continue to exclude trans people with phrases like “women’s health care,” it’s no surprise that most medical schools spend little to no time educating students on trans health or LGBTQ+ health in general. There are also few studies about transgender health, and those that have been done focus mostly on mental and sexual health.

The outcome: Physicians don’t know how to treat trans people. A 2016 study found that doctors and therapists have “vast amounts” of uncertainty when they treat trans patients. At the time, the study’s author told the Guardian that when there’s “no scientific evidence and little clinical experience to base medical decisions,” it creates “the potential to bring bias or limited knowledge into their work with trans people.”

When providers don’t have the training or knowledge, they might attribute a trans person’s medical problems to the fact that they’re trans. For example, earlier this year, a trans man told the BBC that one of his doctors said his uterus might be the cause of his kidney failure.

Language reflects who receives resources, and, conversely, it also reinforces transphobia and discrimination in health care. In one case, Robert Eads, a trans man, died of ovarian cancer in 1999 after multiple doctors refused to treat him for fear it would harm their practices, according to the Times Union. One 2011 survey found that 19 percent of transgender people reported being refused medical care due to their trans or gender-nonconforming status, with higher numbers among people of color.

Discrimination, or misgendering and deadnaming by medical professionals, often leads trans people to hide who we are from health-care providers or give up on advocating for ourselves. For instance, I have gone out of my way to find trans-affirming care in North Carolina. I once drove more than an hour to access a community health clinic that claimed to be “LGBTQ+ affirming” on its website, only to be repeatedly misgendered—even by the clinic’s social worker—after disclosing on my intake form that I am nonbinary and use they/them pronouns.

Physicians know trans people exist. Using “inclusive language” to talk about reproductive health isn’t about being politically correct—it’s about being accurate. Trans people receive reproductive care and every other type of health care, yet medical professionals still use language that doesn’t acknowledge the care we need or who we are.

Of course, medicine refuses to recognize transgender people in so many ways that go far beyond language. Using accurate language wouldn’t solve medical discrimination, or change the fact that 1 in 5 trans adults are uninsured or underinsured. But the language we use indicates who we value. It indicates whose needs we’re willing to meet and who we’re willing to see. The language isn’t the cause of transphobia, but it is a symptom of a deadly systemic problem that medical professionals should push back on in any way they can.