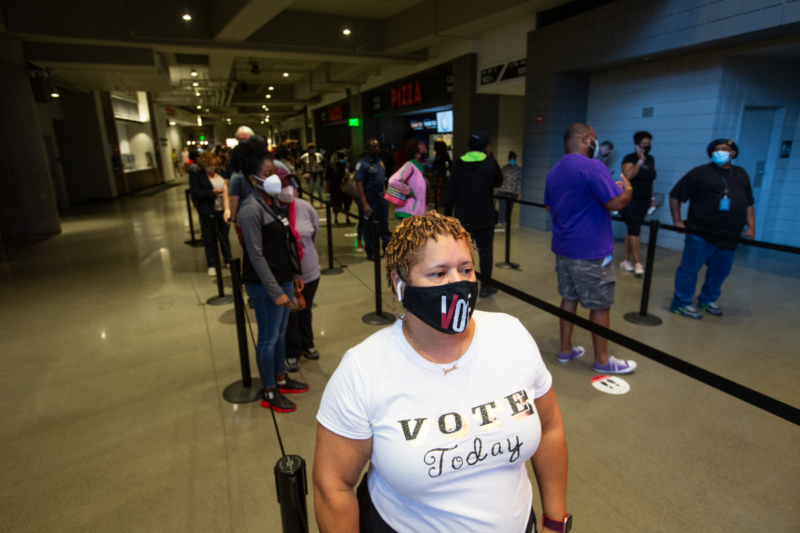 Nearly 3.9 million voters in Georgia—or an estimated 51 percent of registered voters—had cast a ballot during early voting in the state. Jessica McGowan/Getty Images

At the start of early voting three weeks ago in Georgia, Kiana Jackson and other election protection advocates showed up at the only early voting site in Dougherty County, located in the southwest part of the state.

They were there to provide support, water, and snacks to both voters in line and others who passed by. But after a tense interaction with a white voter angry at Jackson’s presence at the voting site, she found herself locked in a battle with the Dougherty County election board.

“We have been at the polls every day since early voting started,” said Jackson, a regional organizer for Black Voters Matter. Along with offering rides to the polls, line warmers and comfort captains have become a routine part of nonpartisan civic engagement work. “From 8:30 to 5 o’clock, [we are] at the one polling precinct that we got in the county,” Jackson said.

These volunteers like Jackson have become necessary as counties and secretaries of state fail to take measures to reduce wait times at the polls—during the first days of early voting in Georgia, some voters endured waits more than ten hours, or the equivalent of working an overtime shift in some places.

The trouble at the Dougherty County polling site started on the second day of early voting, when Sarah Webster, a white woman upset at increased turnout and the presence of Black Voters Matter volunteers, falsely accused them of “buying votes” and “campaigning” within 150 feet of the polling place, in violation of Georgia’s electioneering laws.

Webster, who had a gun holstered on her hip, was the only one present actually breaking the law—guns are not permitted within 150 feet of a polling place in Georgia. Webster took photos of the volunteers and their vehicles, while yelling slurs at them and brandishing her gun. Webster then posted the photos on social media, telling others to be prepared and encouraging her followers to “armor up.”

Over the next couple of days, Black Voters Matter volunteers say Dougherty County Election Supervisor Ginger Nickerson called the sheriff’s office to instruct the volunteers that they needed to move back 150 feet from the polling location. Dougherty County Administrator Michael McCoy also intervened and repeatedly threatened volunteers with arrest for failing to be 150 feet from the polling location. There’s one problem: The 150 feet rule applies to those engaged in electioneering for candidates and campaigns. There is no indication the rule applies to nonpartisan civic engagement organizations like Black Voters Matter providing a service to the public.

Amna Farooqi, a member of the Election Protection Coalition, a group of nonpartisan organizations working to ensure voters rights are protected and every vote is counted, said during an election board meeting that Black Voters Matter did nothing wrong in providing snacks and water to the community.

“I want to be clear that Black Voters Matter, and all of the organizations in our coalition, are not campaign organizations,” Farooqi said. “We are nonpartisan. We have not said a word about supporting any candidate or campaign throughout this process.”

“When you stop community groups from supporting voters in a time of voter suppression, in a time of pandemic, you are sending a message that you do not want people to come to the polls.”
-Amna Farooqi, member of the Election Protection Coalition

Farooqi also said no one with the county had inquired about what the group was doing and why they were at the polls, and instead reacted to frivolous complaints about partisan activity.

County officials’ threats presume that Black Voters Matter is doing something wrong, but experts in election law would likely disagree.

“In elections in which federal candidates are on the ballot, no one can offer any kind of benefit or reward for voting,” election law expert Rick Hasen told Politico in 2010. “The simple way to deal with this is to open up the event to all comers—voters and nonvoters alike.” In other words, food giveaways must be open to everyone regardless of whether they voted.

Federal law prohibits expenditures related to influencing voting, meaning it is against federal law to spend money or provide a good or service of value that influences a person in regards to voting. You can’t even give people stamps to mail their absentee ballots because that can be construed as incentivizing voting.

But nonpartisan civic engagement organizations like Black Voters Matter are not giving people food or water for the act of voting or to influence their vote—they are providing support to voters stuck in long lines due to administrative neglect and inefficiency. Consistent with Hasen’s interpretation of the law, the organizations that do line warming provide snacks to anyone in the vicinity regardless of whether they are passing by or in line to vote.

Organizations like Pizza to the Polls, which made headlines a few years ago when volunteers began sending pizza to voters waiting in long lines, and Chefs for the Polls—a recent initiative by chef José Andrés’ nonprofit World Central Kitchen—are providing people with good food and a feeling that someone cares.

“Ultimately, our goal is to foster a civically engaged community, voters and nonvoters alike, by providing sustenance to places where that engagement may drop because of a long wait, lengthy process, or crowded space,” Pizza to the Polls co-founder Scott Duncombe told the Milwaukee Journal Sentinel. Duncombe made it clear that food is not being given to people in exchange for their votes.

“Incentivizing voting in any way is illegal, and Pizza to the Polls has worked with its experts and legal team since its inception and during multiple election cycles to ensure that no laws are broken in the process,” Duncombe said in a statement to local news. There are no requirements to receive pizza, he said—snacks are available to all who want them, voters and nonvoters alike.

In a recent Board of Elections meeting in Georgia’s DeKalb County, the director of voter registration and elections, Erica Hamilton, said organizations and individuals can engage in comfort activities, so long as the provisions are provided to everyone and do not violate the laws around electioneering.

But some county officials are confused about what the law requires. Atlanta’s WXIA-TV ran a story about whether it was legal to give food to voters waiting in line, after a California man ordered 400 pizzas for voters in Gwinnett County whom he had seen on TV standing in long lines. He was told by Cosmo’s Pizza that filling the order was a violation of federal and state law. The news report drew a hasty conclusion based on a narrow interpretation of federal law and an off-camera interview with the Georgia secretary of state’s office saying handing out water and snacks was illegal. But it’s not, as long as water and snacks are provided to everyone, whether they are voting or not. Jackson still has not received an official response from the Dougherty County election board about Black Voters Matter and the public service they are providing.

“We’re abiding by the 150 feet, at the request of the different attorneys that have gotten involved,” Jackson said. “Our main goal is always to make sure Black people are able to vote and we don’t want to become a distraction.”

Jackson and her team recognize the larger picture in supporting communities that have been impacted by election decisions that result in long lines. To some, including Dougherty County officials, line warming may seem like partisan activity. But like other nonpartisan voting rights activities, line warmers do not distinguish between folks of different party affiliations. And with or without line warmers, determined and motivated people are standing in long lines to cast their ballots.

A recent report found that Georgians in majority Black neighborhoods have far longer wait times to vote because of poll closures since the Supreme Court gutted the Voting Rights Act in 2013. As secretary of state, Georgia Gov. Brian Kemp cited the removal of Section 5 preclearance in a 2015 directive for counties to close polling locations. If protecting voting rights seems partisan, it is only because Republicans have been fiercely committed to obstructing access to the ballot.

Early voting in Georgia ended Friday; by then, nearly 3.9 million voters in Georgia—or an estimated 51 percent of registered voters—had cast a ballot, according to the Atlanta Journal-Constitution.

Standing in line takes grit and determination. While we celebrate those who make the effort, whether voting in person or by mail, one thing remains clear: No one should have to wait the equivalent of a full work day, or half a work day, to vote. And yet long lines persist for voters, particularly voters of color, across the country.

“When you stop community groups from supporting voters in a time of voter suppression, in a time of pandemic, you are sending a message that you do not want people to come to the polls,” Farooqi said.