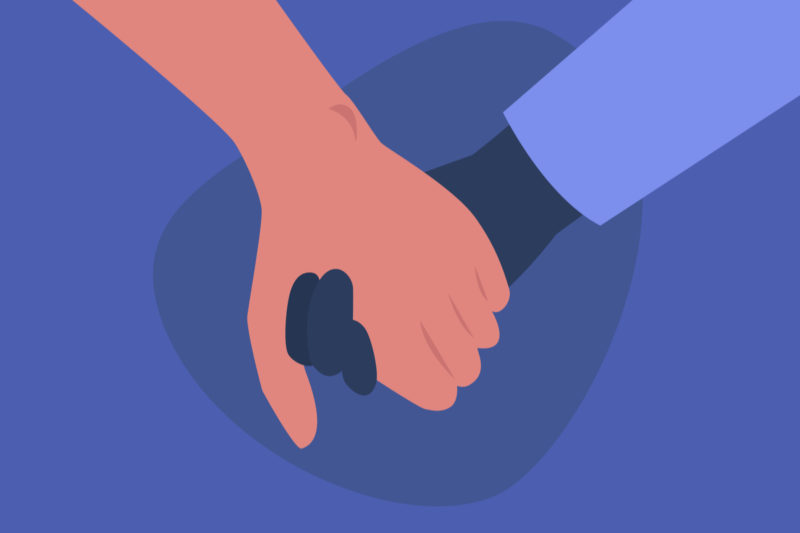 Abortions can be an affirming act between two people on the same trajectory, communicating and caring for one another, especially when the partner centers the pregnant person’s experience and needs. Shutterstock

Tributes from abortion rights advocates are pouring in to honor the late Justice Ruth Bader Ginsburg and her long career fighting for reproductive rights and autonomy. Notably missing in those tributes have been the voices of cis men whose lives have been undoubtedly made better in part by Ginsburg’s advocacy—and it’s reflective of a larger problem.

Because it’s no secret: When it comes to abortion, the pregnant party worries about their health while the partner responsible for the pregnancy, usually a cis man, seems to be mysteriously absent from the conversation.

According to the Centers for Disease Control and Prevention, women in their twenties accounted for the majority of abortions from 2007 to 2016. But no such data exists about the partners—mostly cis men—responsible for these terminated pregnancies. (Most doctors, after all, agree it’s impossible to get pregnant without the help of a sperm.)

So, what about the millennial men who have been involved in some of these abortions? They’re not just invisible specters behind the data points assigned to the women and nonbinary and trans people who get abortions. Or, at least, they shouldn’t be.

Still, most of the cis men I spoke with did not want to go on the record about their experiences with abortion.

“I’m embarrassed we were in that situation,” one said. Another said it wasn’t his story to tell. A few want children of their own and were sensitive about their partner having an abortion in the first place.

The first two partners didn’t tell him they were pregnant until after terminating their pregnancies through medication abortions, an early stage option. This isn’t uncommon, according to Jaime Coffino, a clinical psychologist at New York Anxiety Treatment Center and research fellow at New York University.

“Some pregnant women are afraid to tell their partners or other significant people in their life (e.g., family, friends, etc.) about having an abortion,” Coffino said. “Reasons for this include feeling like they are a burden, being scared of negative judgment, or being nervous that they would have to go into detail about their decision.”

Similarly, Dr. Ghazaleh Moayedi, an OB-GYN and abortion provider in Texas (as well as a fellow with Physicians for Reproductive Health), reiterated what should be a given: The decision to get an abortion is not one made lightly.

This may be why relationships might end after an abortion or why the pregnant person might decide not to notify their partner: They don’t think that person can provide adequate support and care.

Should you choose to get an abortion, know that you are not alone! Thank you to @reba_fancy for breaking down how you can receive support from a friend after an abortion. pic.twitter.com/5xm06lxZNL

“It’s often a moment where people might be thinking about the relationships that they’re in [and] the person that they’re with,” Moayedi said. “And if they want to even be with that person or not.”

Coffino agrees, saying, “I’ve had patients who expressed that having an abortion is a very isolating experience. Some patients did not feel comfortable telling their friends or family about the abortion and only had their partner and therapist (me) to rely on for support. In these examples, it is particularly important for their partner to be supportive.”

The form of support varies depending on the needs of the individual. According to Moayedi, “Listening and creating an open space for listening and just hearing a pregnant person is critical for partners.” Just as different people have different ways of communicating, they also have different means of handling trauma—and an abortion can be a trauma for some.

“There are hormone fluctuations that occur both pre- and post-abortion that can affect mood,” Coffino said. “These hormonal shifts can cause sadness, anxiety, and even depression in some patients. There are also patients that experience grief associated with the abortion. It is important for a partner to be patient, communicate gently, and offer support.”

As for Jack and his last partner, he drove her to the clinic and paid for the abortion. Afterward, they got sandwiches and then ended the relationship. It may seem trivial, but Moayedi believes this type of support—helping to cover costs, driving the pregnant person to the appointment, and bringing them food and other comforts—should be the minimum a partner does, even if the future of the relationship isn’t viable.

Abortions don’t always result in the dissolution of a relationship. It can be an affirming act between two people on the same trajectory, communicating and caring for one another, especially when the partner centers the pregnant person’s experience and needs.

Sam, a woman from Brooklyn, New York, who only wanted to be identified by her first name, had an abortion in 2008 at age 21. She had known her partner for a while, but their relationship had just begun a month or two before.

“We were relying heavily on the pull-out method,” Sam said. “He also didn’t pressure me into doing anything—into getting an abortion. He was just like, ‘Whatever you want to do.’”

When it came time for the abortion, Sam opted for a medication abortion, believing it would be less invasive. Her partner stayed with her throughout the process.

“And he was really wonderful,” Sam said. “He took me to Planned Parenthood. Before that, we went to Two Boots pizza, right next door.” Their relationship continued for about six months. Their breakup had nothing to do with the pregnancy; in fact, the two remain friends nearly 13 years later.

“For some people, it really solidif[ies] their relationship,” Moayedi said. “People realize that they do deeply love the person they’re with. And that person is really showing up for them in that moment.”