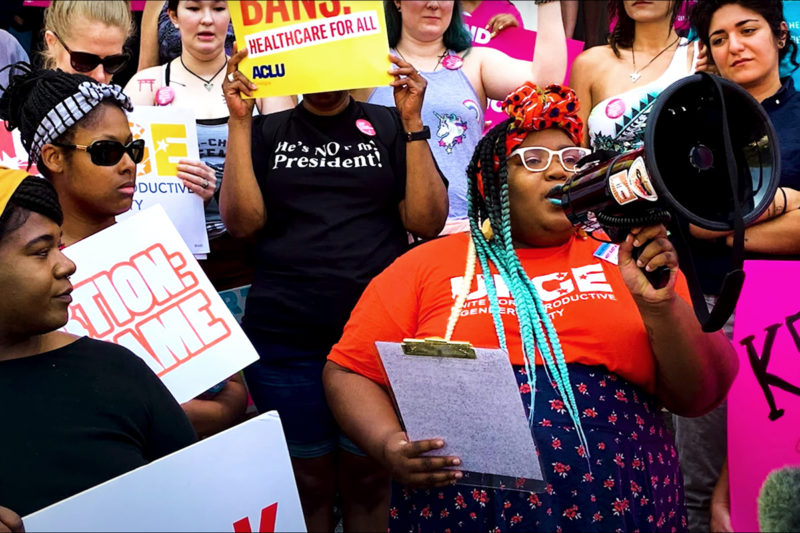 Over the past few weeks, people of color, young people, and other marginalized voices have provided searing and thoughtful feedback about how white-led reproductive rights organizations make them feel. Race Forward/YouTube

The reproductive rights movement has been offered an opportunity. Over the past few weeks, people of color, young people, and other marginalized voices have provided searing and thoughtful feedback about how white-led reproductive rights organizations make them feel.

On Tuesday, the New York Times published an article in which young Black and brown leaders in the gun violence, Black Lives Matter, and reproductive justice movements explained why the fight for abortion access does or does not speak to them. Their critiques were incisive and insightful. Their feedback was a gift.

And yet, without really hearing what these young Black and brown women were saying, white women in the reproductive rights movement dismissed their comments outright—mocking them on social media (and some listservs) as if they couldn’t possibly know anything. The piece was called “‘liberal’ anti-feminist backlash,” and it was resoundingly dismissed.

“A lot of the language I heard was about protecting Roe v. Wade. … It felt grounded in the ’70s feminist movement. And it felt like, I can’t focus on abortion access if my people are dying. The narrative around abortion access wasn’t made for people from the hood.”
— Brea Baker, 26, organizer in Atlanta to the New York Times

As I read the responses, I became very frustrated. Emma Goldberg, the writer, interviewed me for the piece, and although she did not include my specific quotes, much of the sentiment in the piece, particularly in reproductive justice activist Cynthia Gutierrez’s story, reflected my own thoughts. After my abortion, I felt turned off from pro-choice organizing because I didn’t see myself in the conversation. Shortly after starting this work, I was told that talking about my race and abortion is too political. Since then, I have created my own path to tell my story and offer my own critique.

Reproductive rights organizations cannot continue to depend on and point to reproductive justice organizations’ work to absolve them of their archaic framework, as their presence, dripping in whiteness, looms large and refuses to make space for Black and brown people to see ourselves in this movement that is rightfully ours.

The critique in the New York Times piece cuts sharp, but that’s because it’s an accurate indictment of how the reproductive rights movement has been operating and failing to truly serve Black and brown workers or patients.

Of course, the critique feels hard—it wouldn’t be critique if it were easy. Let’s not pretend that these young women told the New York Times anything that they haven’t told the reproductive rights movement over and over in expensive polling and message testing memos. They gave it to you for free, at their own expense. So have a lot of us—for years. The question that’s left is whether white reproductive rights leaders will listen this time.

The New York Times piece was only the latest in a litany of critiques Black and brown people have offered the reproductive rights movement over the past few weeks. Last month the Daily Beast published a series of reports describing how young Black and brown women were pushed out of leadership at the National Organization for Women (NOW) and experienced racism within the group’s ranks.

“They don’t want to truly engage with young women of color or people of color,” Stephanie Piñeiro told the Daily Beast‘s Emily Shugerman. “Now, I know no matter how much you try, you can’t change an institution unless it is willing to do the work to transform,” former NOW Vice President Chitra Panjabi tweeted. “That wasn’t on me or the many other WOC and in particular young WOC within the organization’s ranks. So many of us have left NOW and never looked back.”

Shortly after, dozens of Black and brown workers (myself included) spoke out about the racism and microaggressions we experienced at large reproductive rights organizations, at great risk to our careers. The largely silent response was palpable. In the following days, workers at Planned Parenthood Greater New York—later joined in a letter by workers from Planned Parenthood Great Plains—told the New Republic and Jezebel about the racist and abusive behavior their now ex-CEO Laura McQuade displayed in the office. It was also covered in the New York Times. All of this is connected: the racist employment practices, the myopic messaging, the dismissal of activists’ voices. We are telling you where the holes are in the movement.

Reproductive rights organizational leaders have mostly remained quiet, perhaps because they want to avoid becoming the next headline. But what if, rather than worrying about the next scandal, the movement grappled with what Black and brown people are saying: You have a race problem.

The movement is losing brilliant strategists and organizers in droves because of the refusal to address anti-Blackness and other forms of liberal racism within its ranks. Organizations welcome Black and brown people to show allegiance to diversity and allyship to reproductive justice, but we quickly go from “office pet to office threat” when we try to address some of the antiquated and institutional barriers that prevent Black and brown people—the majority of people who have abortions—from seeing themselves in a movement that is rightfully theirs.

Dr. Jamila Perritt, a Black OB-GYN and abortion provider, penned an insightful piece about the constant pain of sitting in meetings that move forward as normal as our people are being brutally murdered in the street. “I can’t focus on abortion access if my people are dying,” Baker told the New York Times. We’re ignoring what’s staring us in the face at every meeting.

The feedback was being served on a silver platter. Take it.

I understand this can be difficult. But I’ve learned over the years that when the feedback stings and your first reaction is defense, you should sit with it, ruminate over it, and figure out how you can use the feedback to make a change. By offering feedback, someone gave you a gift of seeing what you aren’t. And while that realization can be painful, it’s the work.

But what’s important is the overall lesson white leaders must learn—and I hope they learn it soon. Black and brown people inside and outside the fight for abortion access are demanding a change. We’re not window decorations. We’re here to lead.