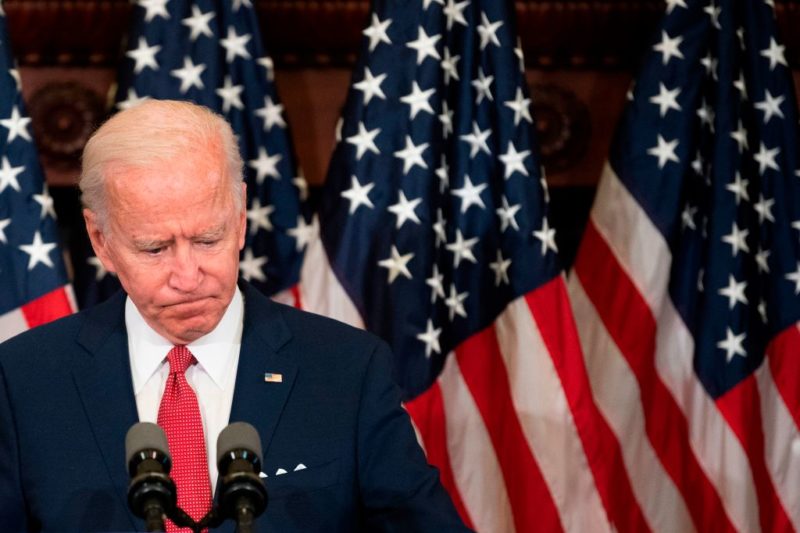 Biden's campaign site lays out a housing plan that addresses LGBTQ youth struggling with homelessness, affirms parenthood rights for LGBTQ folks, and vows to protect trans students. A Biden administration would work to reduce the epidemic of murders of Black trans women too. Jim Watson/AFP via Getty Images

This Pride Month, Rewire.News recognizes that celebrating during the pandemic will look very different for many of us, which is why we’re putting together tools of resistance and hope to help us all survive (and even thrive) Pride 2020.

A week before Donald Trump won the presidency in 2016, a supporter at a rally in Colorado handed him a flag bearing the declaration, “LGBTs for Trump.”

Since that campaign moment, Trump has not attempted to obfuscate his hatred of LGBTQ people and blatant indifference to the ways in which we’re prohibited from parts of social, economic, public, and political life.

It’s difficult to overstate just how viciously the Trump administration has attacked LGBTQ rights and legal protections over the past four years. Administration officials, many with long histories of opposing even basic rights for LGBTQ people, have crafted policy after policy designed to roll back civil rights LGBTQ people gained under Obama.

Perhaps nowhere has that been more evident than in the concerted effort to strip protections from transgender people.

From its first days, the administration has taken aim at transgender rights. In his second month in office, Trump rescinded Title IX protections for trans students. Later that summer, he nominated for judicial appointment the man responsible for pushing North Carolina’s discriminatory “bathroom bill” that barred trans students from using school restrooms that aligned with their gender. Trump has also banned trans people from serving in the military and deputized his U.S. Department of Justice to reverse protections for trans people in the workplace, essentially making it legal for employers to discriminate.

When it comes to reproductive rights, Trump administration officials have gone after funding for Planned Parenthood and diverted federal family planning money to anti-choice clinics by implementing stringent anti-abortion regulations for clinics that receive Title X funds. This has a direct impact on LGBTQ folks, as these clinics provide basic health-care service to low-income people and are some of the only clinics that offer care to the LGBTQ community. The administration is also on its way to scrapping the Affordable Care Act provision that protects patients from gender and sex discrimination.

Biden, the former vice president, is advocating for a “return to normalcy,” prioritizing reversion over envisioning policy proposals that might get LGBTQ people a bit closer to liberation. Despite what the Biden campaign’s oft-cited word “normal” suggests, there is no one way to experience life in the United States. For LGBTQ people, that experience is marred by exclusion that disproportionately harms people of color.

That’s not to say a Biden administration shouldn’t repair what’s been harmed. Biden’s proposals are necessary steps; we have to restore what’s been lost before we can move forward. But what the Biden plan for LGBTQ plan neglects is that LGBTQ people are affected by all forms of discrimination, including climate justice, and not just those specific to gender and sexual orientation.

A truly transformative queer and trans political agenda isn’t merely about building protections onto an existing political structure, but rethinking the structure entirely. Why would we build onto and work within a system that was never meant to uplift us?

I don’t say this to be contrarian. I say this because there are two gaping holes in Biden’s platform: health care and climate justice. Restoring and potentially expanding health-care protections would help employed LGBTQ people, and creating a public health-care option for those without traditional employment would help some. But Biden vehemently opposes Medicare for All, a program that would guarantee health-care access to everyone in the United States, no matter their income or employment status.

The reality for many, no matter their gender or sexual orientation, is that health care simply isn’t affordable.

As of 2018, 27.5 million people in the United States without health insurance, an increase of nearly 2 million over 2017. Republican state-level lawmakers across the country still refuse to expand access to Medicaid. The nation’s health-care landscape is bleak at best. LGBTQ progressives believe that as long as companies can reap massive profits off sick people, we will never be protected. Biden falls short here—by a lot.

Then there’s climate change: Biden has refused to endorse the Green New Deal, offering a watered-down version as an olive branch to progressive voters when it became clear he would be the last Democratic candidate left standing. His goals of getting the country to net zero carbon emissions by 2050 and investing just $2 trillion to tackle humanity’s greatest existential threat just don’t cut it. The longer we wait to address climate change, the worse its impact, creating in a public health crisis that simply won’t be recoverable.

Biden is running as the political salve to Trump’s monstrous rollback of LGBTQ rights. He wants to restore workplace protections for LGBTQ people and supports same-sex marriage. His campaign site addresses LGBTQ youth struggling with homelessness, demanding that homeless shelters provide housing according to a person’s gender identity and prohibiting shelters from denying service based on a person’s sexual orientation or gender identity. The Biden platform also affirms parenthood rights for LGBTQ folks, and vows to protect trans students. A Biden administration would work to reduce the epidemic of murders of Black trans women too.

Biden has plenty of work to do in improving his LGBTQ platform before the November presidential election. The Biden campaign’s queer voter outreach includes this week’s unveiling of an LGBTQ steering committee, Out for Biden, which features many members of the congressional LGBTQ delegation. The campaign launched a new LGBTQ section of Biden’s site that highlights the candidate’s plans to counter Trump’s discriminatory policies.

There are many positives on which we can focus in the lead-up to Election Day. Five months before the electorate decides if Trump will remain in office, the presumed Democratic nominee is running on a platform that is the most progressive we have ever been able to support. That’s good. But it’s not good enough.