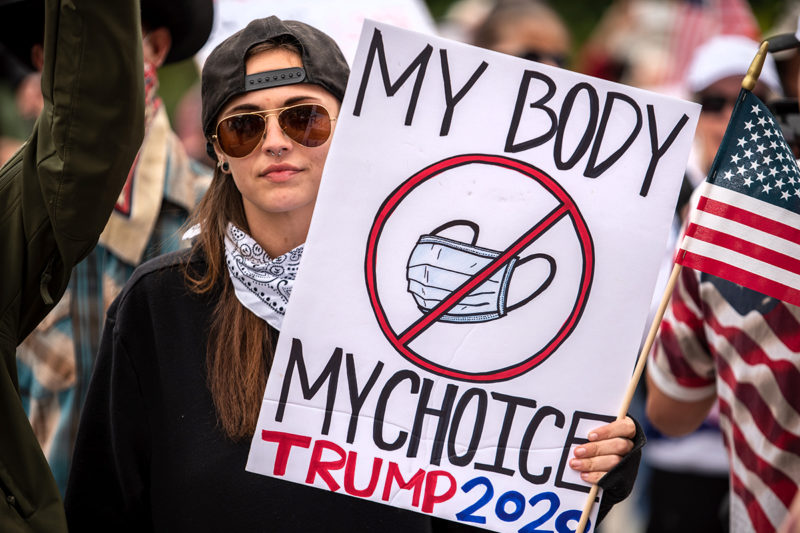 A viral image this weekend depicted a young person in Texas protesting the state’s stay-at-home order with a sign saying "My Body, My Choice." Sergio Flores / Getty Images

A viral image swept across Twitter this weekend depicting a young person in Texas protesting the state’s stay-at-home order, which is helping to save lives during the COVID-19 pandemic. The woman held a sign with a familiar phrase to those of us fighting for reproductive freedom: “My Body, My Choice.”

But displayed prominently alongside the line was a crossed-out face mask, the kind that medical experts, state and local officials, and even members of the Trump administration (no thanks to President Trump himself) have resoundingly said should be worn in public to protect our communities against the spread of the coronavirus.

Conservatives’ efforts to co-opt the symbols and language of other movements, often movements they directly oppose, are part of their standard operating procedure. And of course, conservative media jumped right onto the disinformation bandwagon—as they so often do—to push the same faulty message.

It was to be expected. Absent any rational way to justify their actions, the GOP and the radical right simply use a combination of deflection and disinformation to advance their agenda. A core part of that has always been the co-opting of messages and symbols of social justice movements.

Look no further than the Trump administration for proof. The president’s economic adviser, Stephen Moore, disingenuously framed defying protections meant to safeguard the health and safety of our communities as necessary “civil disobedience” akin to the civil rights movement.

“We need to be the Rosa Parks here and protest against these government injustices,” Moore said about protesters defying these necessary public health protections. Never mind that, across the country, these protesters waved around Confederate flags and signs with swastikas.

In truth, Moore and the protesters are simply trying to advance their own agenda using strategies right out of the anti-choice movement’s propaganda playbook, without thought to the women and families who will be forced to pay the price.

We’ve seen this tactic play out time and time again as the radical right attacks reproductive freedom by deploying dishonest propaganda campaigns that rely on co-opted imagery and phrases from those who seek greater equality and justice. These bad actors weaponize disinformation every chance they get in order to push their ideology and advance their dangerous agenda—no matter the costs.

The anti-choice movement, for example, has long recognized that its long-term goal of banning abortion is unpopular with the vast majority of Americans, and so they attempt to couch their rhetoric in language they think will appeal to persuadable people or those not firmly affiliated with either political party. Here, it’s critical to understand that they’re not moderating their tone to make it more agreeable—they’re parroting ours because they know it works better.

NARAL’s opposition research team documented how this tactic was deployed during this year’s annual anti-choice March for Life rally, which was themed “Pro-Life is Pro-Woman” in an attempt to co-opt feminism. And the language of the civil rights movement is similarly parroted by activists hostile to abortion rights to claim that abortion, rather than anti-choice laws, is discriminatory.

This tactic of parroting the rhetoric of social justice movements is coincidently a specialty of White House senior counselor Kellyanne Conway, who spent decades developing messaging for the anti-choice movement and its allied politicians. It was a key component of her efforts to rebrand the Republican Party as “pro-woman” using medical disinformation and junk science—parroting reproductive freedom supporters’ strategy of heavy reliance on fact and science—all in an effort to make anti-choice positions seem more popular than they really were.

But what all of these anti-choice propaganda campaigns are trying to cover up is that 7 in 10 people in this country support reproductive freedom, and bans on abortion are unpopular in every state.

Within the context of the COVID-19 pandemic, it should come as no surprise that we are seeing out-of-touch conservatives wield this same tactic to continue to advance their harmful agenda, seemingly without any hesitation, even in the midst of a public health crisis.

Only a small but vocal minority support ending the critical precautions that these conservatives are rallying against. A recent NBC News/WSJ poll found that “58 percent of registered voters say that what worries them more [than the economy] is that the U.S. will move too quickly to loosen stay-at-home restrictions, resulting in the coronavirus’ spreading and more lives being lost.”

The public simply isn’t on their side, and they’re seeking a way to deflect from their unpopular agenda.

But here, even more was at play as the right co-opted a pro-choice mantra to protest stay-at-home orders put in place by state officials to help protect the health and safety of all Americans. I would be remiss not to also point to the blatant hypocrisy afoot.

I reject the notion pushed by the anti-choice movement that “our body, our choice” is invalid because it is “not just your body.” But in using the message here to protest efforts to protect our collective health and well-being, they are exposing themselves and simultaneously jeopardizing literally thousands of lives. They simply don’t care.

It’s something that Jennifer Rubin recently explained in the Washington Post. The radical right’s willingness to exploit the pandemic at the expense of women and families, she said, has meant they “have squandered any argument that they care about human life.”

Actions speak volumes. And in this moment, most of the “pro-life” crowd has shown themselves to be anything but.

The strategy at play here by the radical right is plain to see: deploy a sinister brew of distraction, disinformation, and deflection to divert attention from the president’s complete bungling of the pandemic response and make their unpopular agenda seem more palatable—even if it puts lives at risk.

The co-option of the symbols and messaging of people and movements they oppose runs through these tactics like clockwork. Like they so often do, conservatives are pulling out all of the stops to make us look the other way while they advance their ideology.

During this unprecedented public health crisis, we must all be focused on our communities’ health and safety. It has never been more important to make sure we all turn to facts—and just as we cannot let anti-choice disinformation about time-sensitive essential care for women go unchallenged, so too must we recognize conservatives’ attempts to push their dangerous agenda at all costs.