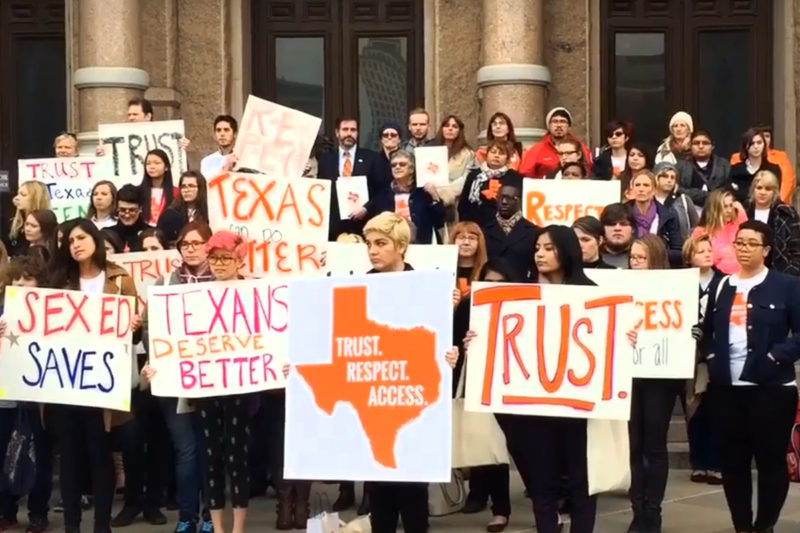 As part of their efforts to mobilize people in opposition to these measures, the TEA Fund joined forces with other abortion rights groups across Texas to form the Trust. Respect. Access. coalition. The Dallas Morning News / YouTube

As the U.S. Fifth Circuit Court of Appeals upholds the Texas abortion ban in the midst of the COVID-19 outbreak, reproductive rights organizations in the state are prepared for the upcoming storm—in fact, they formed a coalition to fight back against a flurry of anti-abortion city ordinances across the state.

“Abortion care is time-sensitive health care that must be provided without delay,” Kamyon Conner, executive director of Texas Equal Access Fund (TEA Fund), said in a statement. “Delaying access to abortion has profound impacts on the people who need it. The longer a person waits to get an abortion, the more expensive it becomes and may require people to travel longer distances, which could lead to them not being able to get the procedures they need.”

Abortion fund workers in the state are still taking calls, talking to Texans about their options, and connecting them to resources. Despite the challenges of the current climate, the TEA Fund continues to provide support to people who need help accessing an abortion in North, East, and West Texas. According to the TEA Fund, in 2019, the organization responded to just over 6,500 calls and offered financial assistance to 924 people seeking abortion care.

Last June, the Waskom City Council passed the first city ordinance banning abortion, designating abortion rights groups as “criminal organizations.” Since then, many other cities across the state have followed suit, declaring themselves “sanctuary cities for the unborn,” appropriating language from the immigrants rights movement. As part of their efforts to mobilize people in opposition to these measures, the TEA Fund joined forces with other abortion rights groups across Texas to form the Trust. Respect. Access. coalition.

The coalition—made up of 14 organizations, including abortion funds, like the TEA Fund and Lilith Fund, as well as advocacy organizations such as NARAL Pro-Choice Texas, Planned Parenthood Texas Votes, and the American Civil Liberties Union of Texas—is pushing back against the local anti-abortion ordinances by working with local activists to speak out.

“It’s really a concerted effort for folks who work to expand reproductive health-care access using a reproductive justice framework,” Conner told Rewire.News. “It’s a way for all of us to be able to move legislation forward. By working together we’re able to focus our efforts.”

Denise Rodriguez, communications manager for TEA Fund, said the group expects a surge of calls from patients once the state’s policy on abortion during the COVID-19 outbreak is settled. Gov. Greg Abbott’s (R) order banning most abortions as part of his COVID-19 response was upheld by the Fifth Circuit Court after been challenged in court.

“Once the dust settles and more appointments open up, we do anticipate an increase in callers needing funding,” Rodriguez said. “We’re communicating with providers in Texas and neighboring states to figure out what’s going on, but there’s still a lot that’s up in the air.”

Calming fears and dispelling misinformation is nothing new for the TEA Fund. As part of Trust. Respect. Access., the TEA Fund has been on the front lines of pushing back against anti-choice rhetoric for years, including efforts to mobilize activists in towns where local community leaders have passed abortion bans.

Sam has lived in small towns in East Texas for most of their life and got connected to TEA Fund and Trust. Respect. Access. after speaking out against Waskom’s ban in June. Sam asked to remain anonymous due to the hostility and threats they have experienced as a result of being outspoken against the anti-abortion ordinance.

With support from the coalition, Sam organized protests and led efforts to show up at city council meetings in towns considering similar ordinances. Both Sam and Conner spoke in opposition to an abortion ban at a Carthage City Commission meeting earlier this year. The commission unanimously voted against the ordinance in February.

Community members in Waskom, which has a population of about 2,200, are divided over the ordinance, Sam said. Abortion rights activists are often met with hostility when they publicly voice their opposition, which can make it difficult to recruit people for events. This is especially true for Waskom. “Most people who oppose it, I think they’re just afraid of like being socially outcasted because it is such a small town,” Sam said. To help encourage people to speak out, the coalition developed resources for activists to use when mobilizing against these bans.

While none of these cities’ abortion bans are in effect, the ordinances serve to confuse people about whether they are still able to access abortion. After Waskom passed the first ordinance in June, the Lilith Fund and NARAL Pro-Choice Texas funded billboards in the area to inform people that abortion is still legal and directed them to needabortion.org to learn more about how to access abortion where they live.

As a result of that campaign, the TEA Fund has seen an increase in calls to their helpline from people seeking information about abortion, Conner said. The TEA Fund received more than 780 calls to the helpline in January 2020 compared to less than 250 in January 2019, and calls will presumably increase amid the COVID-19 pandemic.

The confusion these ordinances create isn’t just about the legality of abortion, but also about concerns over free speech, said Anjali Salvador, staff attorney ACLU of Texas. In February, the ACLU filed a lawsuit against seven East Texas towns that have passed these ordinances.

“From a free speech perspective, what the ordinance is really saying is that these so-called ‘criminal organizations’ cannot operate at all within a city, and that includes even speaking about their work,” Salvador told Rewire.News. “Our government shouldn’t be able to decide who gets to speak and who doesn’t based on their point of view. Pro-choice organizations like Lilith Fund and TEA Fund are being prevented from speaking, but anti-choice organizations are allowed to do their work freely.”

In addition to pushing back against local anti-abortion ordinances, the coalition also works to advance legislation that expands access to reproductive health care. In 2019, the TEA Fund and Lilith Fund worked with Texas legislators to file a bill called “Rosie’s Law,” which would have allowed Texas to use Medicaid dollars to pay for abortion. The bill did not advance out of committee, Conner said.

“We hope not to be deterred by the ordinances any more than we already have been,” Amanda Beatriz Williams, Lilith’s Fund’s executive director, told Rewire.News. “We’ve just been so blown away by the organizing that’s been happening. People are organizing and going to city council meetings and offering testimony. There’s so much grassroots mobilization happening in that region. We’re just so proud to fight in solidarity with them.”