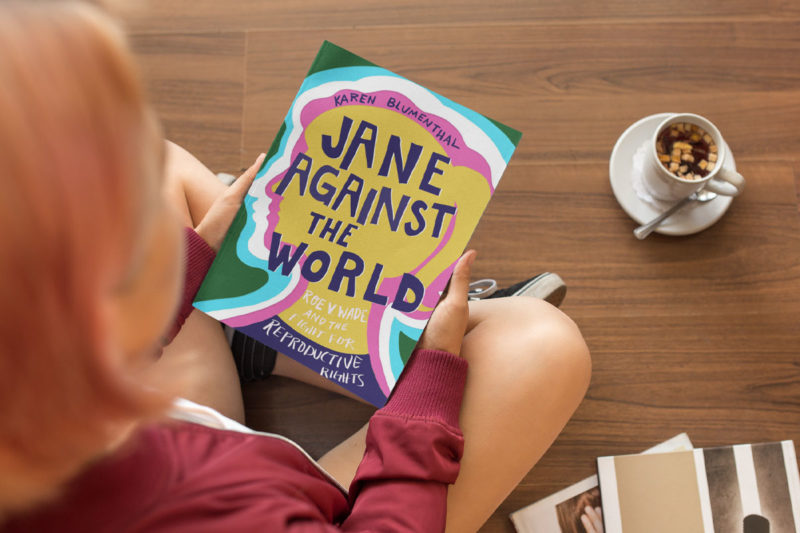 If you’re a parent or caretaker of a teenager or young adult, Jane Against the World is an ideal book to help start (or continue) a conversation on reproductive rights and abortion. Roaring Brook Press - Macmillan Publishers

Journalist and author Karen Blumenthal’s recently released book, Jane Against the World: Roe v. Wade and the History of Reproductive Rights, tells the history of abortion in the United States targeted to a very specific group of people—young people.

Blumenthal has written other nonfiction books for this audience, like a biography of Hillary Clinton and books about Title IX, Prohibition, and the stock market crash. The books have a straightforward tone and approach, born from Blumenthal’s long career as a business journalist, writing and reporting on complicated issues. Her next challenge was to tackle a young adult novel on reproductive rights.

The research for Jane Against the World took about two years, Blumenthal said. “The more I researched it, the more I realized you can’t separate birth control and abortion, and you can’t separate … this whole area of reproductive rights,” she told Rewire.News. And because the book is for young adults, you “really have a responsibility to be thorough,” Blumenthal added. She accomplishes this not only narratively and visually but also through the “Pregnant Pause” segments, supplementary information throughout the book that offers deeper context on topics like “Where do babies come from?” and “A short history of birth control.”

If you’re a parent or caretaker of a teenager or young adult, Jane Against the World is an ideal book to help start (or continue) a conversation on reproductive rights and abortion. Rewire.News spoke with Blumenthal about the research that went into her book, writing for young people, and more. The interview has been lightly edited for length and clarity.

Rewire.News: What did you learn, and what surprised you in the research of this book? Karen Blumenthal: It was very surprising to read about this group of clergy who in 1967 decided that women need access to safe abortions even if they’re illegal and that they’re going to help provide access to women who really want that option. Thousands of clergy ended up being involved in it, and they were incredibly influential and helpful to women all across the country. I was really taken by this group, Jane. They start as a referral service and then they realize that they can perform them, and they’re actually these ordinary women performing abortions. We know [about] midwives, we know that people can deliver babies, so it makes sense, but still it was fabulous [to learn].

The thing that was most shocking of all is it cuts to so many of the significant issues—issues around sterilization—these doctors think they’re doing the right thing, sterilizing women of color across the country without their permission, without their consent. [It] highlighted everything about women’s authority over their bodies, about the differences in the way white women and women of color were treated. It brought all that into focus in a way that other examples are not quite as shocking and clear.

Rewire.News: How has the book been received? Who’s reading it, and what are you hearing from them?

KB: I’m going to be honest and say that I was terrified about doing this book. Before I even agreed to do it, I talked to a lot of people, because I was afraid that there wouldn’t be interest, especially at that level, that schools would have problems with it. And then the worst part would not be that it would be banned but then it would be ignored.

A lot of librarians have told me they really need this book in their high school libraries in their teen sections. I have met librarians who call themselves conservative—they make a point of saying that—but say that on this issue they feel like men have been telling women what to do for too long.

Rewire.News: What do you think is missing in the conversation around abortion when it comes to young people?

KB: Ten to 15 years ago, health was required [in schools]. Apparently health classes are no longer required. So, it occurred to me as I was doing this that there would be kids who might never be introduced to contraception, to forms of birth control. They might get biology, but they wouldn’t get explanations of how certain things work. And boy, that’s really important when you’re young, right?

I went through a real effort to include in [the book] definitions, explanations. And I made a definite decision not to use language that I thought was partisan.

Rewire.News: I think a lot of it has to do with what’s being taught and not taught in schools, and books like these being available. I love the book’s “pregnant pauses,” the illustrations are well done, and the cover is beautiful, which seem important for books for young people.

KB: It’s such a great job [the cover]. I also think it’s for young women in their 20s and 30s, and I would love for people to also see it as a book for adults who don’t want 500 pages or something. That’s the hope. And despite the virus, it’s still going to be the only thing out there when we come up for air. So, people who are interested will find it. Hopefully it’ll be available in the library.