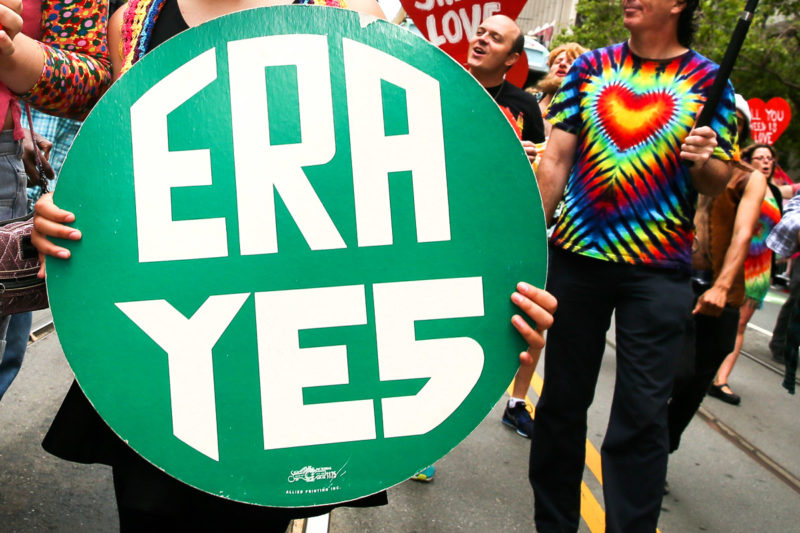 In January, Virginia became the 38th state to ratify the ERA, and in February, the U.S. House of Representatives voted to eliminate the 1982 deadline for ratification by the states. Elijah Nouvelage/Getty Images

As the country waits for the U.S. Supreme Court’s decision in June Medical Services v. Russo, a few simple words in the U.S. Constitution could mark the beginning of a new era for the future of reproductive rights in the United States.

Almost 100 years ago, Alice Paul wrote the original Equal Rights Amendment (ERA), eventually settling on the language that remains the most well-known today: “Equality of rights under the law shall not be denied or abridged by the United States or any state on account of sex.” In the century since, the ERA has gone from a bipartisan issue to a deeply contentious political fight: Congress passed the ERA in 1972, and 35 states voted to ratify it in the ensuing years but for decades has remained three states short of the 38 (or three-fourths) states needed for ratification.

But in recent years, with Nevada and Illinois ratifying it in 2017 and 2018, respectively, momentum is once more building around the ERA.

In January, Virginia became the 38th state to ratify the ERA, and in February, the U.S. House of Representatives voted to eliminate the 1982 deadline for ratification by the states. These steps forward, as Reproaction co-founder Erin Matson points out in her recent op-ed for Rewire.News, have anti-abortion activists “freaking out” about the possibility of the ERA to enshrine access to abortion in the Constitution. While the amendment does not explicitly mention abortion, it is likely pregnant people’s bodily autonomy would form a core basis of the legal precedent established with ratification.

Nonetheless, even as the anti-abortion lobby wrings its hands over the possibility of the ERA’s return to prominence, it seldom comes up on the 2020 campaign trail, much like abortion. While the House’s recent vote was largely symbolic, it paves the way for the deadline on the ERA to be officially eliminated under a Senate and White House controlled by Democrats. And the ERA counts both Democratic presidential primary candidates U.S. Sen. Bernie Sanders (I-VT) and former Vice President Joe Biden among its supporters. Coupled with President Donald Trump’s unpopularity, the scene may finally be setting for gender equality to become a constitutional right, and what that new reality could look like for reproductive rights across the country.

Rewire News spoke to four providers, as well as a physician who performs abortions, about their takes on the ERA from the frontlines of their work. The following interview has been lightly edited for clarity.

What are your thoughts on Virginia becoming the 38th state to ratify the ERA?

Dr. Sheila Ramgopal, medical director of Allegheny Reproductive Health Center in Pittsburgh: The fact that … Virginia may be the tipping point for a three-quarter majority is great. Obviously, with the caveat of states that are maybe going to bow out of the ERA.

Kwajelyn J. Jackson, executive director of Feminist Women’s Health Center in Atlanta: It’s definitely a win. … It’s sometimes hard—because we feel so perpetually attacked—to really take the time to celebrate the small victories, the incremental shifts that we’ve been able to see. [But] amongst our community in Georgia, I don’t know how much of a ripple it really made in the people that were organizing on the ground.

Alison Dreith, deputy director of Hope Clinic for Women in Granite City, Illinois: [It] was very exciting I know for a lot of my colleagues, especially my pre-clinic life, coming from reproductive rights. … A lot of my colleagues came into abortion rights or gender justice work through organizing around the ERA in their beginning days or younger years.

Katy Leopard, assistant director of CHOICES in Memphis, Tennessee: There’s so much going on right now in the world that the ERA is this tiny thing over here. [But] it did resonate … It would feel good to have that pass.

Dr. Warren Hern, Boulder Abortion Clinic in Boulder, Colorado: I knew that we were close … I think [it’s] fantastic. But the current political climate is absolutely poisonous and toxic.

How much conversation is the ERA generating in the reproductive justice community?

Jackson: Honestly, it hasn’t been at the very top of our priority list. … So much of our [recent] energy has been focused on protecting the status quo, that turning our attention to something that is proactive and could lay a potential foundation for gender equity … doesn’t feel as urgent sometimes. That’s one of the tactics of anti-abortion policymakers and advocates … keeping us distracted and busy.

Dr. Hern: It’s been decades since I’ve spoken to anybody about the Equal Rights Amendment. Decades.

Leopard: We get a lot of … passing things or doing things that are good sound bytes but that don’t really make a measurable difference in the work that we do every day. … The ERA is in the background, but I certainly don’t have a good understanding of what it would mean to us in our everyday work.

Dreith: Outside the celebration of Virginia passing it … [I] haven’t heard as much about it. … I think a lot of us are really confused about what’s even plausible … because this has been decades in the making. Sometimes, I think, it’s thought of as this fight long ago … now it’s been given a whole new second life—and how do we bring that history and celebration along with us, to a whole new generation of folks that are working in our clinics, or certainly the ones accessing abortion now?

How would having protections on the basis of sex enshrined in the Constitution change the landscape of your work?

Jackson: It’s really important. I think it’s symbolically important. … I think what will be necessary is for that to have a direct impact on what’s happening at the state level and at the local level—to make sure that it’s being enforced in a way that is tangible to people.

Dr. Ramgopal: I think an amendment that we can consistently rely on, or at least cite, when we’re trying to protect access … I think it’s going to be very helpful. Instead of their interpretations around Roe and the 14th [Amendment], it’s … something that we can rely on a little bit more strongly … a little bit more than other portions of the Constitution or precedent in the courts.

Dr. Hern: [The ERA] depends on who wins the election this fall, and whether [Democrats] get the Senate back. I think that if the ERA does become an amendment, then, theoretically, all of the anti-abortion legislation would fall.

Leopard: I definitely think it could [help] … but it would be a lot to take the ERA, if it passes, get some legal precedent around it, and then have it be something that could be a tool for women or people here to use in the [future] … I’m sure it would happen. It seems like it’s a long road to get there.

Why do you think the ERA and reproductive justice haven’t played a bigger role in the 2020 election?

Dreith: We certainly have come a lot further along in 2020 than we did in 2016, when it comes to candidates’ policy positions on abortion, or gender justice, or paid family medical leave, or equal pay. … People who identify as women … have never got the attention we deserve when we’re over 50 percent of the population. And that’s even more sad when we see the rise of more and more women candidates running for presidential office.

Leopard: I think people around me … we are all suffering from a little bit of learned helplessness. … There’s a little bit of,  “Of course they’re not going to talk about [these issues] because [now] they’re a bunch of older white dudes.”

Jackson: The ever-present undercurrent of patriarchy still fuels so much of what we see and hear from policymakers and those seeking higher office. There’s a missed opportunity to speak directly to the needs of people on the ground, to the challenges that people have been facing, not just in the past four years, but in the past several decades, and really thinking about how to address those substantially.

Dr. Ramgopal: There are a lot of things that I would wish were a bigger topic on the campaign trail. … Abortion access hasn’t really been discussed, and that’s something that I wish was discussed, even beyond the ERA. As an abortion provider, I wish that was a topic, because abortion is so politicized. And abortion should not be politicized.

What role will independent providers and physicians play in helping to see the ERA make it into the Constitution?

Dr. Ramgopal: Independent abortion providers provide the majority of abortion services in this country [and] I think having the independence makes us strong in terms of supporting legislation like the ERA, makes us strong in terms of being the plaintiffs in cases like Whole Women’s Health and June Medical v. Russo. Or, in our state, we have Allegheny Reproductive v. Pennsylvania State, in terms of repealing Hyde. Independent providers have a lot of autonomy in terms of getting involved in advocacy and legislation.

Dreith: I really hate to say we’ll play a huge role. I know … when it comes to TRAP legislation, or the Reproductive Health Act, how much we don’t get to play a role in those things that direct us really intentionally. … We don’t have the political arms, or the advocacy experience. We don’t. Not all of my staff even votes. They’re just abortion providers.

Leopard: I think we definitely have a role. … We do a lot of educating, and sometimes it’s just about storytelling and getting people’s stories out there and getting people to talk about these issues. … We have a big responsibility to educate [supporters] and to keep them engaged in the political process that has the potential to have so much control over what we can and can’t do.

Jackson: Independent providers, working alongside reproductive justice advocates and organizers, will always play an important role in the policy that happens on the ground … but we also need champions outside of the clinics who can help to continue to keep us visible and amplify our voices when we’re not able to be in the rooms.