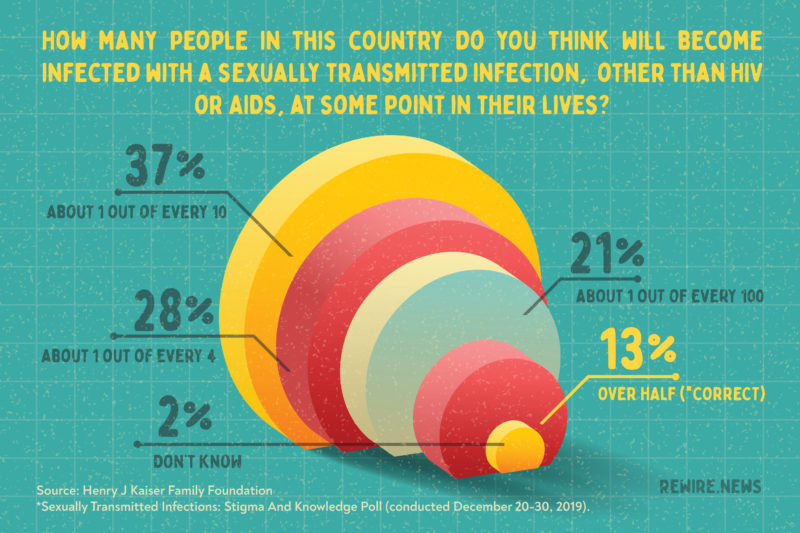 According to the Kaiser poll, about one-third (36 percent) were aware that STIs have become more common over the past decade; 38 percent admitted they didn’t know enough to answer; and 26 percent thought STIs were on the decline. And only 13 percent knew that over half of people in the United States will get an STI, other than HIV or AIDS, during the lifetime. Shutterstock

People in the United States are generally knowledgable, and likely more open, about sexually transmitted infections (STIs), but unaware of the scope of the problem—and most don’t feel like they’re at personal risk of contracting an STI, a recently released study found.

According to the survey, conducted by the Kaiser Family Foundation, 96 percent of respondents correctly responded that STIs don’t always have symptoms, and 54 percent said they know someone, including themselves, who has had an STI. However, few respondents felt they were at risk of contracting an STI in the next year. Meanwhile, STI rates are hitting record highs.

The Centers for Disease Control and Prevention (CDC) estimates that there are around 20 million new STI cases each year. Data for 2018 shows that combined cases of the most common STIs—gonorrhea, chlamydia, and syphilis—are at a two-decade high, with the number of chlamydia cases reaching the highest number ever reported, at more than 1.7 million cases. Additionally, it is estimated that about half of teens and adults under 50 have oral herpes (HSV-1), and 1 in 8 have genital herpes (HSV-2). And an estimated 80 percent of sexually active individuals will contract human papillomavirus (HPV) at some point in their lives.

Of course, many people who have these infections do not get diagnosed, so experts agree that the actual number of infections is even higher.

According to the Kaiser poll, about one-third of respondents (36 percent) were aware that STIs have become more common over the past decade; 38 percent admitted they didn’t know enough to answer; and 26 percent thought STIs were on the decline. And only 13 percent knew that over half of people in the United States will get an STI, other than HIV or AIDS, during their lifetime. A little more than a third (37 percent) thought that only 1 in 10 people would become infected in their lifetime.

Not only are people underestimating the scope of the problem, not enough people are worrying about how they could be personally affected.

STIs are often surrounded by stigma and shame, which can prevent some people from getting tested or seeking the treatment they need. Being willing to address the issue is an important first step in curbing this epidemic, but what still seems to be missing is any sense of personal risk.

Only 8 percent of respondents felt they were at risk of contracting an STI in the next year. Young people, ages 18 to 29, were more likely to say they were worried (20 percent), and there were also differences between Black (13 percent), Hispanic (13 percent), and white respondents (5 percent). These results track well with the CDC data available, which shows that younger adults, Black, and Hispanic people are at higher risk of contracting STIs.

It’s true that not all people are at risk for STIs, but the discrepancy between the rising number of infections that occur each year and how many people are personally concerned suggests that people may not be taking the steps they need to protect themselves. And, of course, everyone who has been sexually active is at some risk of contracting an STI.

Individuals can reduce their risk of STIs by getting HPV vaccines, using condoms, getting tested, and having open and honest discussions before engaging in sexual activity.

The survey also delivered some positive news: Knowledge about STIs is strong. Ninety-six percent of adults knew that a person could spread an STI even if they didn’t have symptoms, and 90 percent knew that an STI may not display symptoms for years.

In order to improve the state of sexual health across the country, we need to break down the shame and stigma around sex and STIs, which is exactly why we need to keep the dialogue going.