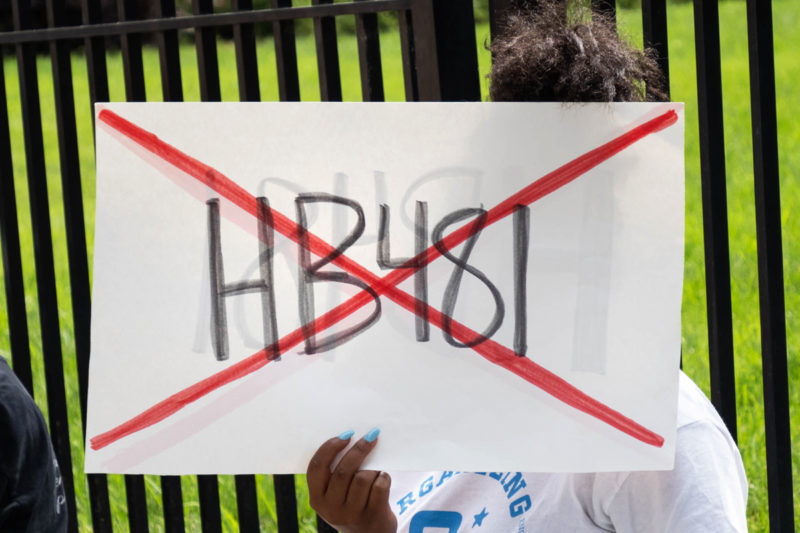 Roxanne Sutocky, the director of community engagement at Atlanta Women’s Center, said the center has used the passage of HB 481 as an opportunity to educate the public on why abortion bans and abortion stigma are harmful and on how to get involved in protecting reproductive rights. John Ramspott / Flickr

With a stroke of his pen, Georgia’s Republican governor Brian Kemp incited anxiety, confusion, and fear in people who need abortion care in his state when he signed HB 481, a near-total abortion ban, into law in May 2019. The law would prohibit people in the state from accessing an abortion as early as six weeks into pregnancy, before most know they are pregnant.

While HB 481 wasn’t slated to take effect until January 1, 2020, clinics that provide abortion services in Georgia were immediately inundated with phone calls inquiring if abortion was illegal. Despite a temporary injunction halting the ban from taking effect—thanks to a lawsuit to strike down the ban filed by the American Civil Liberties Union, the Center for Reproductive Rights, and Planned Parenthood on behalf of abortion care providers, advocates, and patients—the calls still haven’t stopped.

“When Kemp signed the law last summer, our call center got flooded,” Staci Fox, the president and CEO of Planned Parenthood Southeast (PPSE), told Rewire.News. “We had to set up a separate number in our call center just for information about where the law and the litigation stood so that patients and anyone, really, could stay informed.” (PPSE operates four health centers that provide abortion care in Georgia and is one of the lawsuit plaintiffs.)

Since HB 481, one of Fox’s priorities has been informing people who need an abortion in Georgia that the procedure is still safe, legal, and available up until a pregnant person reaches 20 weeks (later in special cases), mainly through social media and on-the-ground campaigns. She’s far from alone in this mission—many of PPSE’s fellow plaintiffs are undertaking similar efforts to ensure that people receive accurate information.

Kwajelyn Jackson, the executive director of Feminist Women’s Health Center (FWHC), told Rewire.News it was their duty to join the lawsuit as a reproductive justice-centered clinic that serves patients from marginalized communities. FWHC has been receiving the same nervous calls from abortion-seekers as PPSE.

“We made a banner shortly after the bill was signed to put outside of our clinic that said, ‘This clinic stays open,’ just so that people would have a visual representation of reassurance that we’re here, we’re open, we’re accepting appointments, we’re seeing patients every day—that we don’t have any plans on going anywhere,” Jackson said.

Roxanne Sutocky, the director of community engagement at Atlanta Women’s Center (AWC), another plaintiff, said that after an uptick in calls due to HB 481, their advocacy center staff began tracking the concerns of callers. They found that callers asking about Georgia’s ban were from both inside and outside the state and were generally afraid of being criminalized for accessing an abortion—including callers who’d already had one.

Callers also reported being given misinformation by anti-choice pregnancy centers (also known as “crisis pregnancy centers,” or “fake women’s health centers”). These organizations, of which there are 91 in Georgia, intentionally confuse pregnant people, claiming to offer “abortion pre-screenings” that are really ploys to persuade people from terminating their pregnancies.

When people visit AWC’s website, the first thing they see is a banner: ‘’Yes, abortion care is still legal in Georgia.” This message is all over the center’s social media, as well as on posters and in handouts at the clinic. AWC has used the passage of HB 481 as an opportunity to educate the public on why abortion bans and abortion stigma are harmful and on how to get involved in protecting reproductive rights, Sutocky said.

The anti-abortion measure has inadvertently resulted in opportunities for abortion care providers: PPSE has attracted more clinicians to their staff who provide abortion care. Meanwhile, FWHC has partnered with medical schools to introduce residency programs for a new generation of family planning physicians to be trained to provide abortions. Due to an influx of donations following the signing of the law, their clinic has been able to expand their capacity by hiring new nurses, nurse practitioners, and administrators.

Last week, lawyers for American Civil Liberties Union, the Center for Reproductive Rights, and Planned Parenthood filed a motion for summary judgment in their lawsuit, asking the judge to permanently block the abortion ban.

The abortion care providers Rewire.News spoke with believe that they will win—“both in the long-term and in the short-term,” Jackson said. She noted that every pre-viability abortion ban (a ban against abortions before a fetus is developed enough to survive outside the uterus) in the United States has been deemed unconstitutional and struck down. Jackson said she deeply believes in the brilliance of the reproductive health, rights, and justice activists who are fighting the abortion ban, and also in the expertise of the attorneys fighting bans and other anti-choice legislation in Georgia and across the country, sentiments echoed by both Sutocky and Fox.

Still, clinics that provide abortion care in Georgia are working together to develop a contingency plan and are part of a national strategy to assess which states are most at risk of losing access to abortion care and which states have the fewest abortion restrictions in case people aren’t able to get the services they need in their home state.

They’re also focused on both national and statewide elections this year, since Republican state legislators were the architects and champions of the ban.

“Let’s be honest: We would not have this abortion ban if it were not for voter suppression tactics. We would have had a different governor in the governor’s mansion who would have vetoed this bill,” Fox said.

Georgia’s abortion care providers are looking forward to being able to focus on issues beyond the ban, such as the state’s high maternal mortality rate. Fox lamented that PPSE wouldn’t be able to devote its full attention to actual reproductive health crises until Republican lawmakers stop “playing politics with people’s lives.”

“They act and say words like ‘we care about women,’ ‘the safety of women,’ and ‘we’re pro-life,’ but their actions do not reflect that,” Fox said. “They’re wasting tax dollars, and they’re wasting Georgia’s time while they’re not focused on real problems.”

This story was produced with support from Press On and the Freedomways Reporting Project, a fellowship program for journalists in the U.S. South whose reporting advances justice.