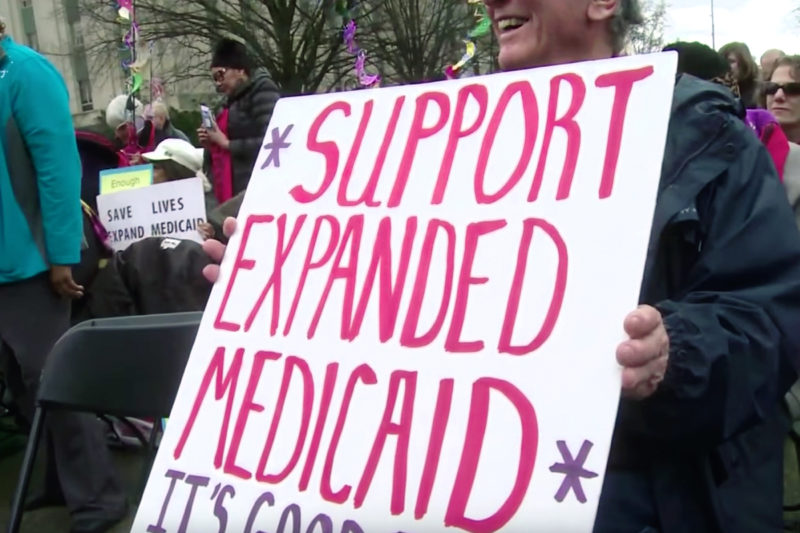 Women and children make up the majority of Medicaid beneficiaries. For women covered by the program, Medicaid ensures they can afford contraception, maternity and prenatal care, and more. PBS NewsHour / YouTube

Lawmakers in the Kansas legislature want to hold hostage health care for low-income families until they get their way on a constitutional amendment that could one day end legal abortion in the state.

The Kansas House of Representatives this month narrowly blocked an effort to put an anti-abortion amendment to the state’s constitution up for a vote in the August primary election.

The amendment, which would have given lawmakers vast power to regulate abortion, was a response to a Kansas Supreme Court ruling that abortion is a fundamental right protected by the state’s constitution. It could have opened the door to legislation like the near-total abortion ban passed in Alabama or other harmful laws that would restrict access to crucial reproductive health care in Kansas.

The push to defeat this dangerous amendment was successful because thousands of Kansans—including women, doctors, and their allies—stood up against politicians trying to insert themselves into private medical decisions and against the anti-choice lobby’s attempt to rush the bill through. I’m deeply grateful to the Kansans who cried foul over this flawed amendment, which would have put access to health care in jeopardy, and to the lawmakers who listened to their voices and voted to protect our rights.

As the founder of Trust Women Foundation, an organization providing abortion services in underserved Kansas communities, I know how important comprehensive health care is for women and families. And I’d hoped that, after the failed February 7 vote on the anti-abortion constitutional amendment, the politicians who supported this amendment would shift their focus toward creating a society where women and families are healthy and safe, instead of continuing their attacks on women’s health care.

Unfortunately, some of these same lawmakers are now doubling down on these attacks by threatening to derail bipartisan efforts to expand Medicaid to 150,000 uninsured Kansans.

For anyone who genuinely cares about reproductive health, Medicaid expansion should be a no-brainer. Women and children make up the majority of Medicaid beneficiaries. For women covered by the program, Medicaid ensures they can afford contraception, maternity and prenatal care, and more. In fact, 39 percent of Kansas births are covered by Medicaid. It’s hard to think of a policy that would do more to improve the health and well-being of Kansas women and their families.

And yet, some politicians are threatening to block the expansion until they get their way and the amendment is approved.

While many Kansans may have nuanced views on abortion, we overwhelmingly agree on two things: that politicians have no business making health-care decisions for others, and that we should expand access to health care so we can make those decisions for ourselves. And I know people across Kansas share my frustration with lawmakers who claim to be concerned about women’s health, while trying to take away access to safe and legal abortion care and blocking efforts to provide quality health care to a significant portion of our state’s population.

Medicaid expansion would be a major, life-changing victory for families and communities across Kansas. I’m truly hopeful that Kansas lawmakers do the right thing and join 37 other states in taking this obvious step of expanding access to health care for their constituents. It’s time for our elected leaders to come together, leave the attacks on reproductive health care behind, and dedicate themselves to doing everything they can to support our state’s women and families.

Julie A. Burkhart is the founder and CEO of Trust Women Foundation.