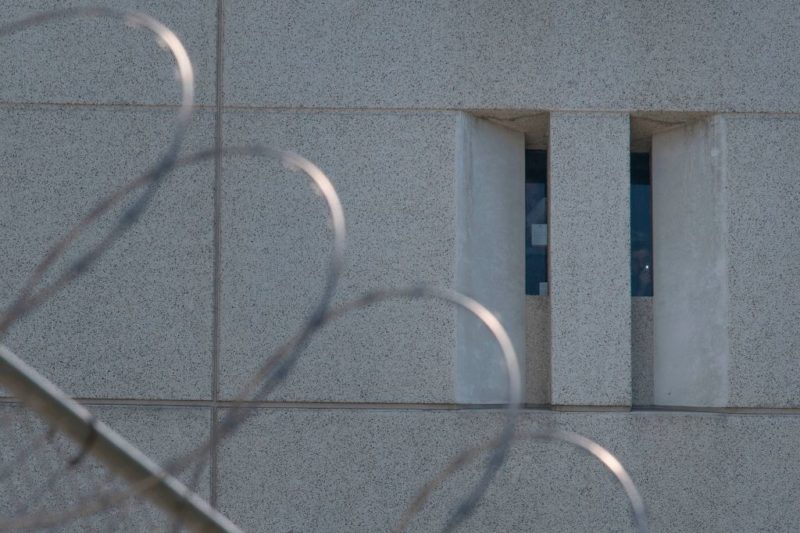 From October 2017 to August 2018, ICE held 1,655 pregnant women. Last year, ICE confirmed that 28 women may have had a miscarriage immediately before entering or while in ICE custody in fiscal years 2017 and 2018. Mark Ralston/AFP via Getty Images

A Salvadoran asylum-seeker has sued the federal government over the miscarriage she experienced while in Immigration and Customs Enforcement (ICE) custody at the Otay-Mesa detention center in California.

Rubia Mabel Morales-Alfaro’s lawsuit alleges that ICE denied her appropriate nutrition and medical services, ultimately leading to her miscarriage. The suit, filed two weeks ago in a California federal court, names as defendants the Department of Homeland Security (DHS), ICE, and CoreCivic, the private corporation operating the detention center.

The legal complaint paints a grim picture of the days leading up to Morales’ miscarriage. After voluntarily presenting herself to ICE on December 25, 2017, seeking asylum, she was initially detained in an unheated DHS detention facility for a few days and then was transferred to Otay-Mesa. Shortly after arriving, on January 3, 2018, Morales told guards she was bleeding and in pain, but she was not allowed to see a nurse until the next day. When Morales finally saw the nurse, the nurse told her bleeding and pain were normal in the first trimester and sent Morales back to detention with some Tylenol.

Over the next two weeks, Morales’ pain and bleeding got steadily worse and she asked to see a nurse every day. Staff refused, and Morales didn’t receive medical attention until January 15, 2018, when she collapsed. At the hospital, she miscarried and was told by hospital staff the miscarriage could have been avoided if she’d received medical care sooner. It’s a shocking story and a comprehensive failure of care, under an administration that claims to be pro-life.

Morales alleges she did not receive the proper nutrition required for pregnant people to successfully carry a fetus to term. Rather than high-vitamin meals with whole grains, fruits, vegetables, and dairy, Morales received high-starch meals that contained no fresh fruit or vegetables. But the poor nutrition pales in the face of the outright refusal to provide medical care.

The complaint points out that the conditions under which asylum-seekers are being held are deliberately punitive—designed to punish. That is, they replicate prison conditions.

That might seem unremarkable at first, but, as Morales notes in her complaint, immigration detention is civil, not criminal. The U.S. Supreme Court addressed this issue years ago, saying that immigration proceedings “are civil and assumed to be nonpunitive.” People who are detained while in the process of seeking asylum are not supposed to be subject to prison-style conditions.

There’s no doubt that’s what is happening. Morales alleges that asylum seekers are strictly limited in their access to fresh air and sunshine, they are held in unheated cells and given no blankets, they have substandard nutrition, and they are denied medical care.

This level of cruelty in civil immigration confinement isn’t recent. As Morales’ lawsuit notes, in 2000, the United States Department of Justice “allowed the core standards for immigration detention facilities to be the same as those governing the U.S. Bureau of Prisons.”

The Obama administration maintained a policy of “aggressive deterrence”—the idea that severe punishment and harsh conditions would deter potential future migrants from coming to the United States. This led to a class action lawsuit challenging the practice of detaining one person to deter another migrant. In 2015, a federal district court enjoined the agency from using detention as a deterrence strategy. Since then, things have only gotten worse.

Concerns about ICE’s detention process for pregnant immigrants in the Trump era have been a constant. Advocacy groups have filed requests for information about ICE’s policy on “Identification and Monitoring of Pregnant Detainees,” which says the agency is committed to “identifying and providing appropriate care for pregnant detainees in ICE custody.” ICE detention standards, issued in 2011, say that a pregnant detainee in custody “shall have access to pregnancy services including routine or specialized prenatal care, pregnancy testing, comprehensive counseling and assistance, postpartum follow up, lactation services and abortion services.”

Detentions of pregnant migrants have spiked under Trump. From 2012 to 2014, ICE detained 559 pregnant women. From October 2017 to August 2018, ICE held 1,655 pregnant women. Last year, ICE confirmed that 28 women may have had a miscarriage immediately before entering or while in ICE custody in fiscal years 2017 and 2018, a fact that belies ICE’s assertion that pregnant detainees have access to a full range of pregnancy services.

Morales has said she was physically assaulted by a Border Patrol agent, as reported by the San Diego Union-Tribune in 2018, though this allegation is not included in her legal complaint. Morales, who told the immigration official she was pregnant, “said she was shoved to the ground and kicked in the back by a Border Patrol agent” who arrested her for crossing the border, according to the Union-Tribune.

Morales’ complaint is also an indictment of the private prison industry. Morales was held in a prison run by CoreCivic, formerly the Corrections Corporation of America. The complaint claims the company generated nearly $1 billion of revenue, in a mere 12 months, from housing detained immigrants.

CoreCivic’s poor practices aren’t limited to its immigration facilities. A Department of Justice audit faulted the company for poor oversight and severe understaffing in one of its maximum-security facilities for federal criminal detainees between 2010 and 2015, according to the department’s Office of Inspector General. From 2007 to 2015, 14 men died while in criminal custody in prisons run by CoreCivic.

This also isn’t the first time women have miscarried while in the custody of CoreCivic. Morales’ complaint recounts previous lawsuits against the company, one of which was from a pregnant prisoner, Meredith Manning. Over three days in 2004, Manning alleged, she experienced vaginal bleeding but received no care and eventually miscarried. CoreCivic was forced to pay $250,000 in a settlement to Manning after a former nurse for the company testified that the prison’s medical unit was so understaffed it prevented proper medical care for prisoners.

It’s these past lawsuits, miscarriages, and deaths that underpin the broader scope of Morales’ complaint: that what happened to her isn’t an isolated incident. Rather, the nutritional and medical failures are “consistent with the Defendants’ demonstrated policy and practice of deliberate indifference to the serious medical needs of detained asylum seekers.”

What happened to Morales is the natural result of a collision of the Trump administration’s anti-immigrant bias and a profit motive on behalf of private prison companies. Were she were to prevail in her lawsuit, it may be a step toward dismantling both of these factors.