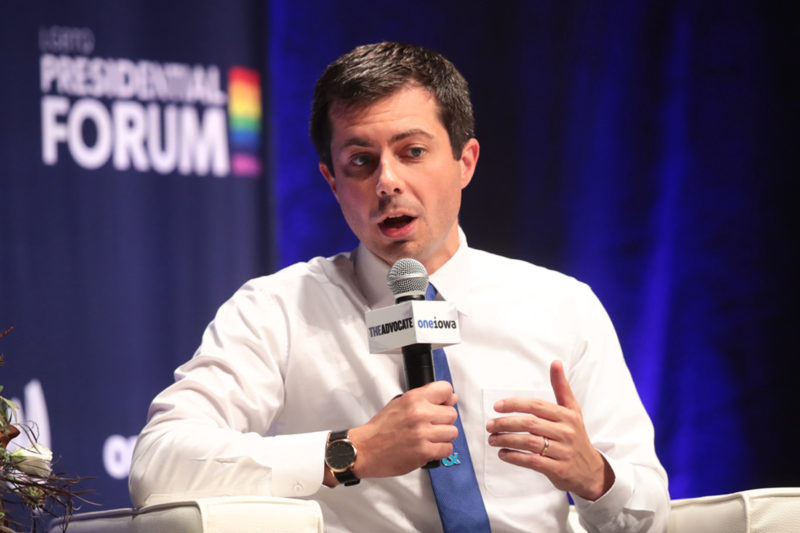 Upon inspection, Buttigieg’s proposed policies aren’t about assisting and transforming the lives of the LGBTQ community, rather the beneficiaries of his platform that are most like Buttigieg himself: cisgender, masculine, white, wealthy, educated, and married. Scott Olson / Getty Images

Living an identity is not analogous to a political platform. Identity politics can be a tool candidates use to garner votes—“I’m a woman, so women: Vote for me”—or deflect against criticisms that their policy may fall short—“I can’t be racist because I experienced the marginalized identity of being a woman.”

Navigating the many social, political, and economic systems of the United States, both formal and otherwise, requires us to lean on different identities in different contexts. For instance, as a mixed-race Jewish queer woman, I understand the fear of coming out, but with tolerant Bay Area parents, I will never understand being ostracized or alienated because of my sexuality. Identity is a tricky thing because it allows us to relate to others in our community, but it doesn’t mean we connect on the same level or have the same experiences.

When former South Bend, Indiana Mayor Pete Buttigieg first announced his candidacy for Democratic nominee for president in April 2019, I was elated. Buttigieg is an LGBTQ trailblazer: He grew up in a state that allows discrimination of queer people on the basis of religion and came out as a married gay man while mayor of South Bend. He’s an important presidential candidate for a number of reasons, especially because somewhere in the United States, a young person is watching a man love a man in public.

But there are complicating factors in my relationship to this candidate as a queer person. I’m wary of how he’s using his sexuality to communicate his lived experience, policy positions, and ability to relate to other marginalized folks. Upon inspection, Buttigieg’s proposed policies aren’t about assisting and transforming the lives of the LGBTQ community—the beneficiaries of his platform are people most like Buttigieg himself: cisgender, masculine, white, wealthy, educated, and married.

Though Buttigieg would be the youngest and first openly queer president, I’m not convinced that his administration would address the existing conditions that economically, politically, and socially depress queer and trans people.

LGBTQ people have the highest uninsured rates of any demographic groups, and by ethnicity and gender, the rates are higher for nonwhite and non-cisgender people. The shifting belief among Democrats that insurers should not be able to make money off our health represents a new wave of queer politics that wrestles with the very foundation of private insurers, pharmaceutical companies, and medical debt collectors. But the Pete for America health-care platform, Medicare-for-All-Who-Want-It, maintains a role for private insurers, which refuse to cover patients with “pre-existing conditions” (a phrase meant to describe things like sexual assault recovery and pregnancy), charge exorbitant out-of-pocket costs, and deny coverage for mental health care and transition services.

Alternatively, Buttigieg’s opponents are presenting varied versions of Medicare for All plans like the one carved out by Sen. Bernie Sanders (I-VT), which would cover transition services and treatments, lower the cost of prescription drugs, make mental health care affordable and accessible. These plans abide by the thinking that no one should struggle to find, afford, or rely on employment for health care. The latter is especially inaccessible for queer and trans people, who are most likely to experience employment discrimination but remain unprotected from public and private workplace discrimination on the basis of gender and sexuality in more than two dozen states.

I’m also wary because Buttigieg’s LGBTQ- and other issue-specific policies lack an intersectional lens, failing to account for the diversity of experiences among queer and trans people. For instance, in Buttigieg’s “Becoming Whole” plan outlining the campaign’s LGBTQ policies, he addresses the murder of Black trans women by suggesting a plan to increase police training and sensitivity. Most Black trans women are not murdered by police, but by private citizens, and that overpoliced minority communities are actually put at greater risk of harm and violence.

Citing the disproportionate number of queer and trans people who are incarcerated, Buttigieg is in favor of “diversion” strategies and expanding rehabilitation programs. But Buttigieg believes that incarcerated people do not deserve the right, that withholding suffrage is “part of the punishment.” And while he is in favor of abolishing private federal prisons, a vast majority of prisons are publicly run. Any of the estimated 238,000 queer or trans people who are incarcerated will not be able to exercise their right to vote under his presidency, which is at odds with Buttigieg’s fundamental message of freedom: that one can live a life of their choosing.

In this section of the plan, Buttigieg redirects readers to his Douglass Plan: A Comprehensive Investment in the Empowerment of Black America, a nod to Black queer people that is the only race- and ethnicity-specific position in the platform. Black adults in America are five times more likely to be incarcerated than their white counterparts—and queer people of any race are more likely to be incarcerated than their straight peers—but it’s troubling that the only time brown and Black people are mentioned in Buttigieg’s LGBTQ policy proposal is with mention of incarceration. The Black vote doesn’t hinge on a candidate’s stance on a singular issue.

The plan also fails to address Indigenous members of the LGBTQ and two-spirit communities, nor are they mentioned in his Indian Country plan, though they are subject to some of the highest rates of gun and sexual violence, employment discrimination, and poverty.

In order to shift the foundation of heteronormativity that has guided everything from sex education to hospital visitation, a candidate needs to address white supremacy, patriarchy, and colonization. Buttigieg just doesn’t do that. Perhaps what makes his run so lackluster to me is because it centers whiteness.

Buttigieg’s stance on gun violence also betrays queer and trans interests. He believes Americans should be able to retain handgun ownership to “defend themselves,” and his broader plan includes a study of extremism and funding for police and other law enforcement. Research shows that most gun deaths are actually a result of privately owned handguns. Suicides account for two-thirds of gun-related deaths, and queer and bisexual youth are almost five times more likely to attempt suicide than their heterosexual peers. While the candidate’s LGBTQ+ Suicide Prevention Act proposes establishing a task force and identifying risk factors, gun violence prevention starts with addressing access to handguns, which Buttigieg does not acknowledge.

Buttigieg’s policies fail us in health care, incarceration, gun violence, and debt cancellation, to name a few. Debt cancellation would go a long way to ensure that queer and trans people can afford our lives and our health care, but Buttigieg’s approach of funding college for students coming from families that make over $100,000 a year demonstrates a lack of belief in education as a public good and ignores the high rates of poverty trans people face, thus creating additional hurdles to college affordability. Queer and trans people of color, and especially if they’re poor, will be the first to feel the impact of climate change, which Buttigieg is approaching with a level of caution that confounds me.

Buttigieg is exactly the kind of queer candidate that straight moderates can feel good about because he’s not too threatening. Being a white cisgender man is as much a part of Buttigieg’s identity as is his sexuality, and that has afforded him the ability to move through the world free of gendered and racialized oppression. This identity has dictated his experience in the classroom, his earning potential, and how a crowd reacts to the tenor of his voice. His identity allows him to run confidently as the Democratic candidate with the least experience, avoiding the question of “electability.”

It’s telling that the queerest generation has the least favorable opinion of the youngest and only LGBTQ candidate. Buttigieg’s lackluster approach to institutionalized racism, policing, health care, and climate change and justice could potentially work against us. The queer candidate should support the most vulnerable among us—people of color, homeless youth, the uninsured, the poor—and not cower to those who see this as radical.

But Buttigieg’s LGBTQ and general policy positions are as radical as the legacies of his skin color and gender, creeping along the edges of the status quo in an attempt to carve out room within the systems that were built to exclude, oppress, and kill LGBTQ people. I hope his candidacy brings more queer politicians into the fold—but for now, I’d rather have a straight progressive president who addresses these issues than a moderate gay man who doesn’t try to know us.