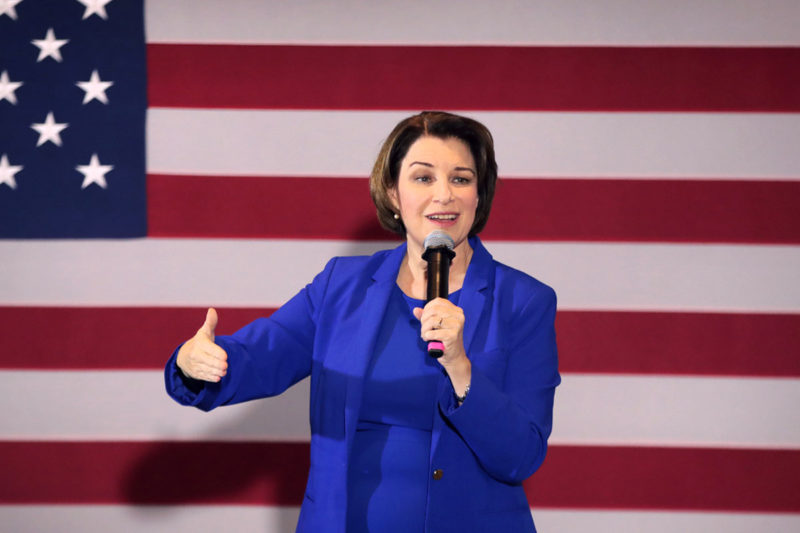 Democratic caucuses and primaries begin in three weeks, and presidential hopefuls are working in overdrive to gain voters’ support. Increasingly, such efforts include vying for the support of a traditionally overlooked voting bloc: people with disabilities.

Klobuchar is one of several Democratic candidates who have released disability policy proposals, including Sen. Elizabeth Warren (D-MA), former South Bend, Indiana, Mayor Pete Buttigieg, entrepreneur Andrew Yang, former U.S. Secretary of Housing and Urban Development Julián Castro (who dropped out of the race earlier this month), and Sen. Kamala Harris (D-CA) (who dropped out of the race in December).

Other candidates, such as Sens. Bernie Sanders (I-VT) and Cory Booker (D-NJ), and former Vice President Joe Biden, include disability rights sections on their websites and have mentioned people with disabilities to varying degrees in their other proposed policy. No GOP candidate has similar proposals listed on their websites.

In 2016, 62.7 million eligible voters (or more than a quarter of the electorate) either were living with a disability or had a household member with one, according to researchers at Rutgers University.

Warren’s plan, for example, begins by recognizing the disability rights movement, explicitly naming activists, and Buttigieg described the experiences of Emily Voorde, a campaign staffer with a disability, as informing his commitment to issues that impact those with disabilities.

Klobuchar’s plan struck a different tone, absent of narratives from people with disabilities. As Julia Bascom, executive director of the Autistic Self Advocacy Network, tweeted, “I’m not sure who the campaign consulted with on this plan, but it sure as hell wasn’t self-advocates.”

Klobuchar’s approach to substantive issues also raised concerns. In her proposal, Klobuchar affirms her support of controversial legislation that allows for the surveillance of people with a variety of cognitive and developmental disabilities, including autism. She also mentions “treatment beds” as part of her discussion about mental health, suggesting she believes more people with psychiatric disabilities should receive support in inpatient settings. Disability advocates have pushed for decades for increased community-based supports and worry that the candidate’s plan would lead to people with psychiatric disabilities being unnecessarily institutionalized.

In her policy, Klobuchar does express her support for the Disability Integration Act, which would make long-term services and supports in the community a civil right. But some feel that is not enough, considering the plans’ glaring omissions of critical disability rights issues, such as repealing government rules that prohibit people who receive Supplemental Security Income (SSI) from marrying or ensuring disabled people have the right to raise families free of discrimination. (Both Warren and Buttigieg’s proposals address these problems.)

“So, the candidate plans that included people with disabilities supported an INCREASE in civil rights for our communities, except for Kloubuchar [sic]. The ADA’s 30, shouldn’t we be about moving forward, not rolling back?” Rebecca Cokley, director of the Disability Justice Initiative at the Center for American Progress Action Fund, tweeted, referencing the Americans with Disabilities Act, anti-discrimination legislation that became federal law in 1990.

People with disabilities are happy they are finally being acknowledged, especially by candidates who’ve consulted with the community in creating their proposals. But they’re still pushing politicians to do more.

As Andrew Pulrang, co-founder of the #CripTheVote movement, tweeted, “We’ve been celebrating the increased attention candidates are paying to disability issues. And @amyklobuchar is part of that increased attention. And that’s good. But attention is only one goal, and there is such a thing as good, bad, and mediocre disability policy.”