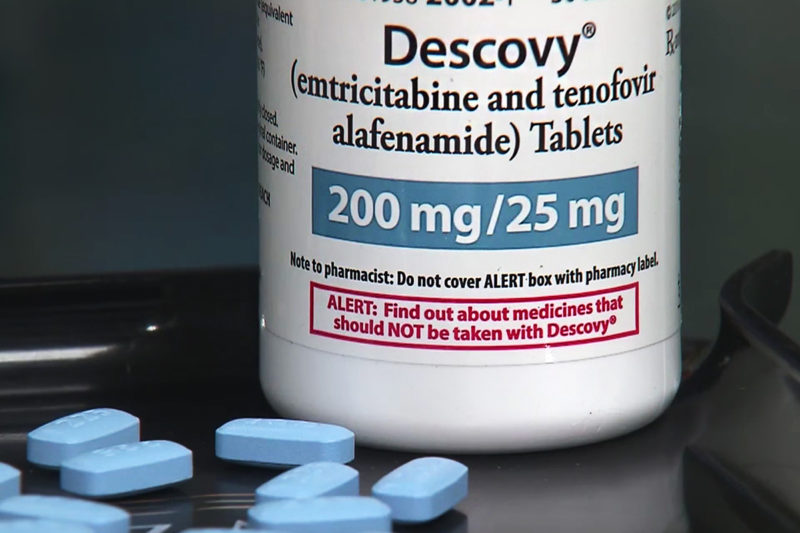 Descovy, with its brand new patent, could easily slip into the market niche previously occupied by Truvada, thus enabling Gilead to continue to sell a new version of PrEP for the $1,800 per month (or more) that it has been making on Truvada. WPLG Local 10 / YouTube

When PrEP—or pre-exposure prophylaxis, a daily pill that protects against HIV—came on the U.S. market in 2012, it captured the attention primarily of men who have sex with men. According to the Food and Drug Administration, the first PrEP pill, Truvada, provides over 90 percent protection from sexually acquiring HIV when taken daily. Logically, this is a boon to women who may not be able to insist on condoms or prefer not to use them. So why did the FDA recently approve a new PrEP pill without approving it for cisgender women’s use?

Truvada isn’t cheap. Without insurance or other cost breaks, one month’s worth costs about $1,800 in the United States. The price is much lower in countries where essential medicines’ prices are capped by government.

Given its cost and the fact that Truvada was marketed primarily to gay men, it is not surprising that 95 percent of Americans using PrEP in 2016 (the last year data was available) were men. More than two thirds (69 percent) of U.S. PrEP users were white, over half (56 percent) lived in a Western or Northeastern state, and 81 percent of all PrEP prescriptions were covered by commercial insurance. In other words, PrEP was (and still is) mostly used by affluent white men.

When PrEP was being developed more than a decade ago, two major clinical trials were conducted to assess its effectiveness: one enrolling 4,758 heterosexual couples and one enrolling 2,499 HIV-negative gay men and transgender women. High levels of protection were achieved in both trials. Findings confirmed that Truvada is highly effective for cis women, even though it may be slightly “less forgiving” than for cis men if doses are missed. Research shows that one of the two components in Truvada is not absorbed by vaginal tissue as readily as by rectal tissue. Missing doses can cause the level of this drug to drop in the vagina, possibly reducing the user’s protection. So consistent, daily use of Truvada is more important for cis women to ensure full protection.

Yet it remains out of reach for some of the cisgender women who need it most. Among U.S. women at high risk of HIV, most are heterosexual women of color living in low-income areas where HIV incidence is relatively high. And globally, women and girls make up the majority of all people living with HIV. In sub-Saharan Africa, 80 percent of the 15 to 24-year-olds getting HIV are female. There, a young woman’s risk of HIV is double that of her male counterpart.

Most advertising, nevertheless, portrays PrEP as being for “other people,” not for heterosexual women of color in low-income areas. In 2016, only 4.7 percent of PrEP users in the United States were women. Although this is starting to change, PrEP users portrayed online and in television ads are still mostly well-dressed men who have sex with men.

On October 3, the FDA approved Descovy, a new form of PrEP. Developed by Gilead, the makers of Truvada, Descovy is presented as an equally effective treatment, and research suggests a slight improvement in the bone density and renal problems associated with PrEP in a small percentage of users. But there is also evidence of increased weight gain and cardiovascular risk associated with Descovy use.

Still, the FDA announced its approval of Descovy as safe and effective for use by the public. In its press release, the FDA said Descovy was approved for use by “at-risk adults and adolescents weighing at least 35kg … to reduce the risk of HIV-1 infection from sex, excluding those who have receptive vaginal sex” (emphasis added). This exception, the FDA acknowledged, was “essential because the effectiveness in this population has not been evaluated.”

Indeed, Gilead didn’t bother to include cisgender women, transgender men, or non-binary people with vaginas in its Descovy research. To determine Descovy’s effectiveness for vaginal use, Gilead would have had to test cis women’s use of it. This would have involved a second, more complex trial.

In 2016, before the research started, the FDA went along with Gilead’s plan for Descovy research and “provided guidance throughout the protocol development.” Gilead’s Descovy trial took 96 weeks to complete and enrolled 5,387 people; 99 percent were cisgender men and 1 percent were transgender women. No people with vaginas were included. The FDA accepted Gilead’s claim that an additional trial would be too difficult and take too long to get adequate cooperation from members of the appropriate population—young African women “with high unmet need” for HIV prevention.

Instead, it accepted Gilead’s alternative proposal: that the company simply extrapolate its effectiveness for women from data collected in the 2012 trial that enrolled heterosexual African couples using Truvada. Descovy researchers also agreed to study, in the lab, the impact that Descovy had on the vaginas of pigtail macaques.

The one-study plan that Gilead implemented triggered fierce objections from HIV activists, women’s health advocates, and some scientists and bioethicists. This surfaced when an expert panel was convened by the FDA August 7 to evaluate the research. At first, 16 out of the 18 FDA-selected panelists reviewing the Descovy data agreed that the drug “had been shown to be safe and effective for pre-exposure prophylaxis (PrEP) against HIV infection in men and transgender women who have sex with men,” according to a report by Medscape.

Conflict emerged, however, regarding the question of whether the “available data support approval of a PrEP indication for Descovy for cisgender women.” On that question, eight voted yes and ten voted no. Several of those in opposition fiercely criticized Gilead for its failure to investigate Descovy’s effects on cisgender women and the FDA for implying that a study to see if Descovy was as effective in women as in men was too difficult to conduct in this case.

Dr. Lindsay R. Baden of the Dana-Farber Cancer Institute in Boston voted against approving Descovy for cis women without conducting all the essential research. “We’ve failed women,” he said on the record. “To be at this point and not have the data to guide decision-making is a shame on all of us.”

Dr. Dawn Smith, a leading voice at the Centers for Disease Control and Prevention, also voted no. “I also find it disrespectful and an issue of research equity,” she said. “Women deserve the same quality of data about the safety and efficacy of the drugs they are exposed to that men get, and that’s not the situation we find ourselves in at the moment.”

The FDA’s approval of the treatment for everyone but “those who have receptive vaginal sex” generated further controversy. Dr. Rochelle Walensky, chief of infectious diseases at Massachusetts General Hospital, told the New York Times in October that this omission “should be unacceptable in these days and times.” She added, “I want to see a large-scale, rapid effort to get data on women as soon as possible. That, in my mind, is the only way to rectify this.”

In a public webinar held on November 13, Dr. Jeffrey Murray, deputy director of the Division of Antiviral Products at the FDA, acknowledged, “At the end of the day, this was a failure in drug development.”

The webinar’s second presenter was Yvette Raphael, a South African activist and head of Advocates for the Prevention of HIV in Africa. She said the reaction to the approval of Descovy in her country was simply, “How dare they?” She added that this outrage in the communities she works with is not about Descovy, per se, but about the fact that no one saw any need to consult them about the issue.

As a condition of the panel’s decision to approve Descovy immediately (for use by all except those who have receptive vaginal sex), the FDA agreed to require Gilead to conduct another Descovy trial that will enroll 1,500 African women at high risk of HIV. It will start in 2020 and be completed by 2024.

Meanwhile, Truvada is about to go off patent. Its patent expiration will put Truvada in competition with generic versions of PrEP moving into the U.S. market. Descovy, with its brand new patent, could easily slip into the market niche previously occupied by Truvada, thus enabling Gilead to continue to sell a new version of PrEP for the $1,800 per month (or more) that it has been making on Truvada. Though Descovy’s profits remain to be seen, Truvada earned the company $3 billion in 2018 alone.

During the November 13 public webinar, held three months after the FDA panel’s meeting, Raphael said her group had already reached out to Gilead to start an open discussion on what African women’s role will be in designing and implementing the new trial.

She hadn’t heard back.

This piece does not represent the views of any entity by whom the author is employed. It was produced in partnership with Treatment Action Group.