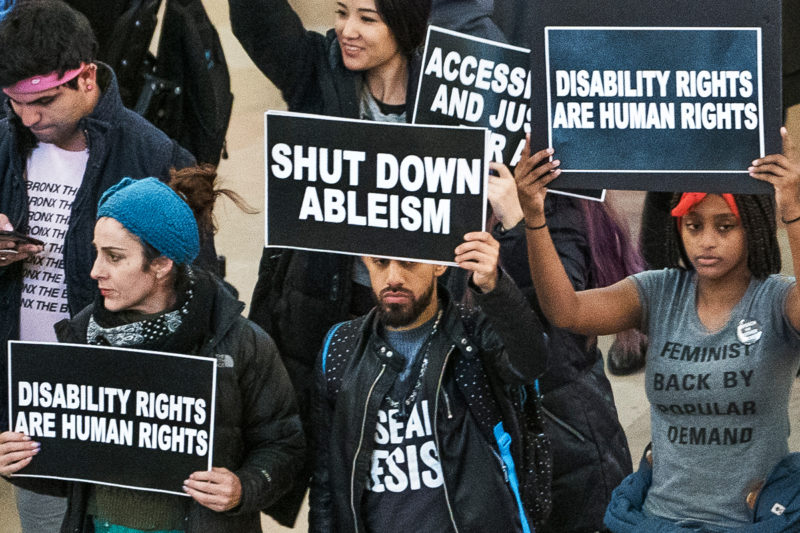 While disability rights activism is not new, the coverage these protests received was unprecedented—and, all the while, advocates were speaking for themselves en masse on social media, shifting the lens to bring the voices of those with disabilities to the frontlines of politics. Barbara Alper/Getty Images

As presidential hopefuls vie for voter support during an election season, they usually focus on specific, although often overlapping, demographic groups, including people of color, suburban women, and middle-class voters. Until this election, candidates have mostly overlooked disabled people as a crucial voting bloc. But, the tides may be shifting ahead of the 2020 election, as some are recognizing the importance of the disability vote by centering disability rights in their platforms.

Disabled people like Gregg Beratan, who co-founded the #CripTheVote movement with Alice Wong and Andrew Pulrang, are welcoming the recognition. “Part of this may be that some candidates are just treating this as a tick box of things you have to do when running for president. If it is, I’m OK with that,” he told Rewire.News.

“It brings our community into the minimum bar of things people have to consider when they run,” Beratan added.

But the notable attention from 2020 candidates, especially so early in the election season, comes as a welcome change. Pulrang told Rewire.News that although he hasn’t settled on a candidate yet, he is pleased that the community is a part of the conversation.

“While putting together [#CriptheVote’s] list of candidates and links to all of their policy pages, I was very encouraged to see several top-tier candidates presenting disability platforms that, while different, are similar enough that anyone of them would represent real progress for us.”

“If they could all be combined into one agenda that includes all of their points, it would truly be comprehensive,” he said. “Most of these candidates’ plans cover more ground, in more depth, and show pretty clear fingerprints from actual disabled people.”

Variation in the disability rights proposals isn’t necessarily a bad thing, Rebecca Cokley, director of the Disability Justice Initiative at the Center for American Progress Action Fund, told Rewire.News. “It’s not all the standard cookie-cutter type, instead each candidate’s platform or policy proposals are really centered on their campaigns interest, and the passions of the candidate,” she said.

“It’s obvious that they know that we can save ourselves and have.”

The public recognition of disability issues from politicians follows decades of activism and organizing by disabled people, who have long called for equal rights and treatment.

One such example of recent political activism by disabled people is the protests held both at the U.S. Capitol and across the country in response to the GOP’s attempts to repeal the Affordable Care Act. If not for people with disabilities putting their bodies on the line and enduring countless arrests demonstrating the political power of the disability community, the U.S. health-care system would have splintered even further. While disability rights activism is not new, the coverage these protests received was unprecedented—and, all the while, advocates were speaking for themselves en masse on social media, shifting the lens to bring the voices of those with disabilities to the frontlines of politics.

Buttigieg was the first candidate to hire someone with a known disability, who he highlighted in a recent op-ed for BuzzFeed. Warren has also hired disabled staff.

Cokley, who has advised candidates about disability policy and community engagement, appreciates “the actual presence of people with disabilities as volunteers and staff on campaigns, [which] has proven that we’re at the table and not willing to take a backseat.”

“A number of candidates have reached out to us, and we have provided expertise where we can, and have also provided input on language, accessibility, and other critical things as it relates to meeting the needs of the disability community,” she said.

When #CripTheVote, a nonpartisan online movement, began during the 2016 election, its goal was “to engage both voters and politicians in a productive discussion about disability issues in the United States, with the hope that Disability takes on greater prominence within the American political landscape.”

Today, the movement has become a crucial part of elevating the disability voice in political discourse. In fact, during the October 15 Democratic debate, 1,597 individuals participated in a #CripTheVote Twitter chat, resulting in 3,807 tweets.

Still, much work remains: Not every candidate has released a disability policy platform and several candidates do not even include disability rights on their websites. Notably, a June report from Miami Lighthouse for the Blind and Visually Impaired found that none of the candidates’ websites are fully accessible to people with disabilities. A follow-up review showed some progress, although no website meets all accessibility requirements, which include captioned videos for those who are deaf and hard of hearing and image descriptions for those who are blind or have low vision.

On Wednesday, the candidates take the stage again for another Democratic debate. As they’ve done during prior elections, #CripTheVote will be live-tweeting the debate and “for fun, created a new bingo card for folks [to play along],” Wong said.

As the election season continues, disabled people hope to see even greater engagement with the community moving forward.

“It’s exciting to finally be treated like everybody else,” Cokley said.