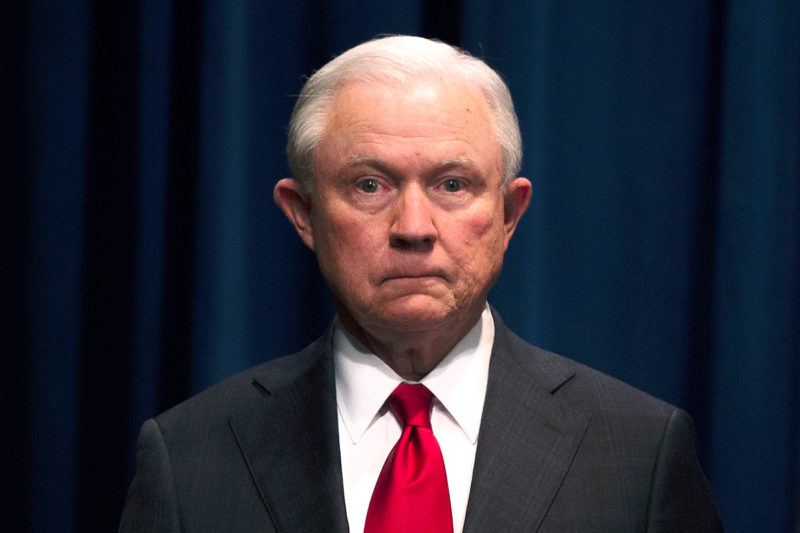 Sessions was one of Trump’s earliest supporters in Congress, where he was a hardline anti-choice advocate. ANDREW CABALLERO-REYNOLDS/AFP via Getty Images

Jeff Sessions, President Trump’s disgraced former attorney general, announced he will run in 2020 for his old seat representing Alabama in the U.S. Senate.

The announcement came Thursday evening in a campaign video in which Sessions praises the president. Though he resigned from the U.S. Department of Justice (DOJ) last November amid pressure from Trump Sessions says “the president is doing a great job for America” and that Trump has his “strong support.”

Sessions was one of Trump’s earliest supporters in Congress, where he was a hardline anti-choice advocate. When Trump announced in November 2016 he would nominate Sessions as attorney general, the anti-choice organization National Right to Life praised the decision, citing the Alabama lawmaker’s record. “Throughout his tenure in the United States Senate, which began in 1997, Jeff Sessions has a 100% pro-life voting record,” the organization said in a press release. “He has opposed all of President Obama’s nominees to the U.S. Supreme Court.”

Sessions co-sponsored dozens of anti-choice measures in the Senate, including efforts to codify the Hyde Amendment’s discriminatory ban on federal funding for abortion care and to ban abortion 20 weeks into a pregnancy.

Reproductive health and rights advocates opposed Sessions’ nomination to the DOJ, citing his record. In testimony submitted to the Senate Judiciary Committee, Vicki Saporta, then-president and CEO of the National Abortion Federation, said Sessions had “repeatedly voted to reject an amendment put forth by Senator Charles Schumer to the Bankruptcy Reform Act, which would prevent violent perpetrators of crimes against abortion providers and clinics from evading charges levied against them by filing for bankruptcy.”

He was among the senators who encouraged the DOJ and U.S. Department of Health and Human Services in 2015 to investigate allegations against Planned Parenthood made by anti-choice front group Center for Medical Progress, Saporta noted in her testimony.

Civil rights groups also opposed Sessions’ nomination to the DOJ. He resigned in November 2018—but not before he used his office to undermine LGBTQ rights.

The Alabama Senate race is shaping up to be a competitive election in 2020. Sen. Doug Jones, a pro-choice Democrat running for reelection, is considered especially vulnerable in a state that voted overwhelmingly for Trump in 2016.

“GOP opponents are expected to highlight Jones’ support of abortion rights—in a state where voters put anti-abortion language in the state Constitution and lawmakers are attempting to ban abortion outright—and his opposition to some of Trump’s judicial nominees,” the Associated Press reported in September.

Jones joined the Senate after winning a 2017 special election to fill Sessions’ seat. He narrowly defeated Republican Roy Moore, who made his anti-choice views and record a key part of his platform.

Sessions will face a crowded field in the Republican primary, including Moore. The Alabama primary is scheduled for March 3.