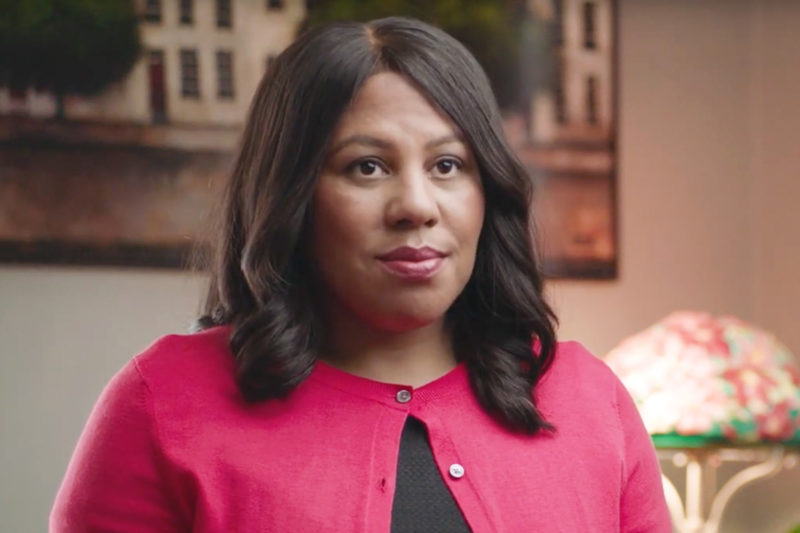 Bynum-Coleman, who has the endorsement of NARAL Pro-Choice Virginia, says on her campaign site that “women’s rights are under attack” and promises to help “protect a woman’s right to make her own medical decisions” if elected. Everytown for Gun Safety / YouTube

After major gains in 2017, Virginia Democrats and progressive activists are bullish about their prospects for taking control of both legislative chambers in Tuesday’s election. And with Gov. Ralph Northam (D) already in office, that would pave the way for a steady undoing of Virginia’s vast web of GOP-imposed anti-choice restrictions.

“It’s really the first time in history we could have a pro-choice majority in the general assembly, and that’s something we thought wouldn’t be possible for at least another decade,” said Tarina Keene, executive director of NARAL Pro-Choice Virginia, which is supporting pro-choice candidates in state senate and house races.

With Northam—who Keene called “a stalwart champion for reproductive rights and freedom”—in the governor’s office, advocates believe a Democratic-held legislature could go beyond rolling back anti-choice laws and take a proactive stance on abortion access. Keene said Democrats could move to codify the right to abortion into state law, as Vermont Democrats did this year.

“Roe is the floor, it is not the ceiling,” Keene told Rewire.News, adding that the rights bestowed by the landmark U.S. Supreme Court Roe v. Wade ruling don’t mean much when anti-choice measures destroy access.

Codifying abortion rights would ensure a U.S. Supreme Court ruling gutting Roe would not end legal abortion in Virginia. “It’s not if with Roe, but when,” Keene said. “We want to make sure we’re ready for a post-Roe world.”

“This mentality exposes the deep-seated belief that somehow men have the right to control women,” said Holly Hazard, legislative liaison at Network NoVa, a grassroots group that advocates for progressive candidates in Virginia. “I’m sorry for men born 200 years too late, but that ship kinda sailed.”

Voter enthusiasm is on the Democrats’ side as the state election approaches, according to a recent survey from the Judy Ford Wason Center for Public Policy. Sixty-two percent of Democrats polled said they were enthusiastic about voting in the November 5 election, compared to 49 percent of Republicans. Fifty-three percent of likely voters say they want Democrats to take control of the legislature, while 37 percent said they want the GOP to retain its majorities.

Republicans hold a 21-19 majority in the state senate, where all 40 seats are up for reelection on November 5. All 100 house seats are also up for grabs, as the GOP defends its 51-48 edge. Democrats would need to gain two state senate seats and three house seats to secure a legislative majority.

Here are some races we’re watching in Virginia’s elections.

Cox, a longtime opponent of abortion rights with backing from anti-choice organizations, once compared aborted fetuses to soldiers killed in battle in response to New York lawmakers passing a landmark pro-choice bill. Bynum-Coleman, who has the endorsement of NARAL Pro-Choice Virginia, says on her campaign site that “women’s rights are under attack” and promises to help “protect a woman’s right to make her own medical decisions” if elected.

Progressive Democrat Eric Stamps is taking on Republican Del. Danny Marshall, who has been a reliable anti-choice vote in the Virginia House since 2002. Marshall signed on as a cosponsor of the 2012 Virginia law mandating forced ultrasounds for abortion patients.

Stamps promises to back pro-choice legislation if elected in November.

“Lower income groups of women, especially women of color, suffer the most when their healthcare options are restricted,” Stamps told Rewire.News in an email. “Wealthy women will always be able to get the care that they need. Women living in and on the edges of poverty are not afforded the same luxury.”

Despite Marshall’s anti-choice voting record, Northam recently praised the Republican for doing “great work for Virginia and his constituents” at a press conference announcing new economic development in the district.

In an email to Rewire.News, Northam’s office said the governor was committed to electing Democrats to the legislature. Northam “supports Eric Stamps and every Democrat running for the General Assembly,” Alena Yarmosky, a spokesperson for the governor, said in a statement.

“It was poor timing and was very careless,” Stamps said of the governor’s comments about Marshall. “You’d think that someone on his staff would have told him to not make such glowing remarks about a Delegate that’s against everything Democrats fight for, and in reality, has done little for the district. And it’s not just the candidate that he celebrated, it’s the Republican idea of only focusing on helping big businesses while everyone else fights over crumbs.”

Marshall did not respond to a request for comment from Rewire.News.

Ghazala Hashmi, who received early backing from NARAL Pro-Choice Virginia, is facing off against incumbent state Sen. Glen Sturtevant (R-Chesterfield) in the senate’s 10th district. Sturtevant voted in 2018 for a “fetal personhood” bill that would have charged someone with aggravated involuntary manslaughter if they drive under the influence and “caus[e] the death of the fetus of another.” He opposed Medicaid expansion, which gave health-care access to around 400,000 people in the state, including 5,000 people in his own district.

Hashmi, meanwhile, supports Virginia’s Medicaid expansion and says on her campaign site that she’s “dedicated not only to expanding access to healthcare but to protecting all citizens’ rights to make their own decisions about their health.”

“I have always been a staunch advocate for women’s reproductive healthcare and rights, and now more than ever—I am ready to stand up and speak out for women and families across Virginia when it comes to protecting their bodily autonomy,” Hashmi said in a statement after NARAL Pro-Choice Virginia endorsed her in the primary. “I will be a vigilant defender of access to reproductive freedom, ensuring that every Virginian, no matter their zip code, has access to safe and legal abortion care.”

In what has become one of the most expensive state senate races in the 2019 Virginia election, Hashmi had a significant edge on her GOP opponent in cash on hand as of October 24.

The race in the senate’s 11th district pits Democratic candidate Amanda Pohl against state Sen. Amanda Chase (R-Chesterfield), who NARAL’s Keene described as a “Trumpster vehemently opposed to reproductive freedom.” Chase, who reportedly once called rape survivors “naive and unprepared” in a Facebook post, delivered incendiary remarks on the anniversary of Roe v. Wade in January, asking, “How can any human being in good conscience kill a baby and call it good?”

“Some call it abortion, but let’s call it what it is,” Chase said. “It’s legal infanticide.”

Pohl’s platform advocates for privacy in personal health-care decisions. “I know firsthand how harmful Virginia’s restrictive abortion laws can be for women who need surgical intervention in miscarriages. We don’t need government involved in personal medical and healthcare decisions,” she says on her campaign site.

In an August statement announcing NARAL Pro-choice Virginia’s endorsement, Keene said that Pohl experienced a miscarriage and was “unable to receive the timely and compassionate reproductive healthcare she needed” due to the state’s anti-choice restrictions. “This experience opened Amanda’s eyes up to how anti-choice politicians in Virginia had chipped away at her access to reproductive health and rights for decades, and how these laws are insulting and dangerous to all Virginia women,” Keene said.