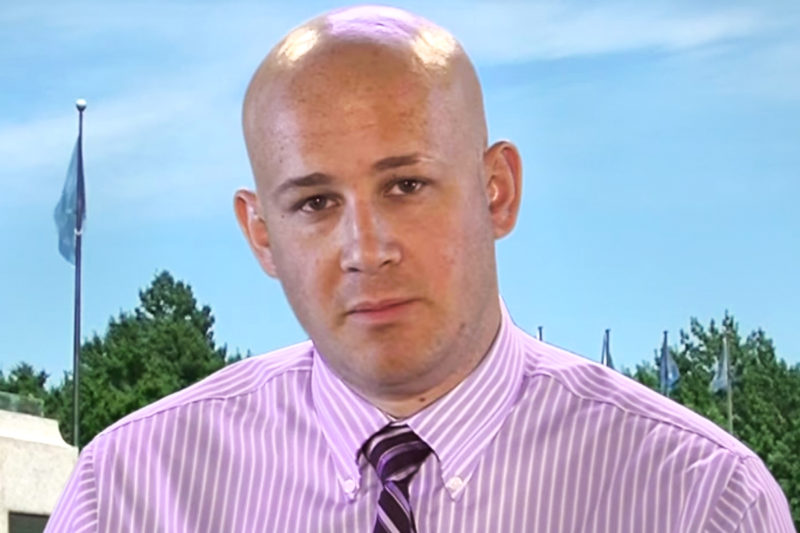 Silk made national headlines in late 2018 when he prefiled the “Abolition of Abortion in Oklahoma Act.” The extreme anti-abortion legislation would have criminalized abortion so that “all parties involved in an abortion (physicians, nurses, the pregnant person, etc.) could potentially face murder charges.” OKGOP / YouTube

Silk announced his intent to run for Congress this month, the Oklahoman reported. “Most of our federal delegates, they talk a big game, but when it comes down to actually authoring legislation to back up what they do, it just hasn’t been done,” he told the publication.

Silk made national headlines in late 2018 when he prefiled the “Abolition of Abortion in Oklahoma Act.” The extreme anti-abortion legislation, as Rewire.News reported, would have criminalized abortion so that “all parties involved in an abortion (physicians, nurses, the pregnant person, etc.) could potentially face murder charges.” The radical legislation wasn’t advanced to a committee vote in the state’s Republican-controlled legislature.

In a statement, Silk reportedly said his frustration with what he deemed Oklahoma’s “very liberal” political leadership led him to decide to run for Congress. Both chambers of the state’s legislature are dominated by Republicans, and the governor, Kevin Stitt, is a Republican whose 2018 platform included making Oklahoma into the most restrictive state on abortion.  Silk did not respond to a request for comment from Rewire.News.

Silk told Rewire.News in December that he considers himself an abortion “abolitionist,” part of a fringe group of anti-abortion activists who seek the immediate and total end of abortion and who compare themselves to the anti-slavery movement. “I believe that the government has a primary role to protect life, especially innocent life,” Silk said.

The Oklahoma lawmaker said that when he was first elected, he sought to incrementally curb access to abortion care with what he called “typical pro-life measures that don’t really actually do anything.” After meeting with other so-called abolitionists, he said he experienced a “paradigm shift.”

“I only run abolition bills now,” he said in December.

Silk told Rewire.News at the time that he opposed some forms of birth control. “Any birth control that allows an egg to be fertilized and then somehow disrupts the process, that should be banned because it is essentially taking human life,” he said.

Since filing that legislation, Silk has criticized Republicans in the state for introducing a “trigger law” to automatically outlaw abortion in Oklahoma if the U.S. Supreme Court overturns Roe v. Wade. “It offers no immediate protection and accomplishes nothing unless the federal law changes,” Silk said in a February statement.

Mullin, the Congressional representative Silk is trying to unseat, told the Associated Press last week that he plans to seek another term. He did not return a request for comment from Rewire.News.

In his nearly seven years in Congress, Mullin has been a reliable anti-choice vote. According to NARAL Pro-Choice America’s scorecards, Mullin received a 0 percent rating from the group in 2016, 2017, and 2018. His anti-choice views are the first thing listed on his campaign site platform. Mullin co-sponsored the “Born-Alive Abortion Survivors Protection Act,” which is based on a myth—experts say births after failed abortions are rare and laws already exist making it illegal to intentionally end the life of an infant. Mullin also co-sponsored legislation to defund Planned Parenthood and a bill to make the discriminatory Hyde Amendment permanent.

“Ultimately, our goal is to reverse the Roe v. Wade decision,” Mullin said in a 2017 column expressing support for the dubiously named “Pain-Capable Unborn Child Protection Act,” legislation he co-sponsored that would ban abortion at 20 weeks based on the false claim that a fetus can feel pain at this point in a pregnancy.