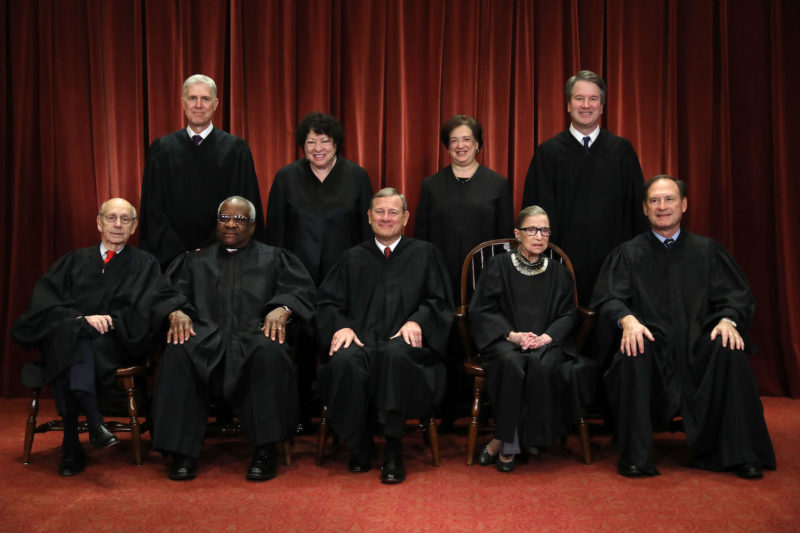 The Supreme Court could issue orders as soon as next week in the abortion rights cases, and by the end of June we could know if it’s legal for your boss to fire you for being LGBTQ and if states must fund religious schools. Chip Somodevilla / Getty Images

The U.S. Supreme Court begins business again Tuesday with its first official conference of the 2019-2020 term, one that has the potential to be momentous for civil rights.

June Medical Services v. Gee is a case from Louisiana involving a challenge to Act 620, a law that requires any physician providing abortion services in the state to have admitting privileges at a hospital within 30 miles of their clinic. The law is effectively identical to the one the Supreme Court declared unconstitutional just two years ago in Whole Woman’s Health v. Hellerstedt. The only reason June Medical Services is before the Roberts Court is because the Fifth Circuit Court of Appeals effectively ignored the precedent set in Whole Woman’s Health by ruling Louisiana’s Act 620 could take effect. That decision, advocates said, would result in Louisiana being left with only one abortion clinic in the state. Chief Justice John Roberts put that Fifth Circuit decision on hold in a last-minute order issued in February, hours before Act 620 was set to take effect. Attorneys from the Center for Reproductive Rights have asked the Court to take the case and reverse the Fifth Circuit decision without arguing the case because the ruling is such an affront to the precedent of the Court. We could know as early as next week if the Court agrees to take this approach.

Box v. Planned Parenthood Indiana and Kentucky is the second abortion rights case the Court will consider taking up. A carryover from last term, Box involves a challenge to Indiana’s HB 1337, an omnibus abortion bill that amended several provisions of existing abortion regulations, including the state’s mandatory ultrasound law. Prior to HB 1337’s passage, patients in Indiana were required to have an ultrasound before having an abortion, but they could schedule and have that ultrasound on the same day as their abortion. HB 1337 instated an 18-hour delay, forcing patients to make two separate clinic visits. Both the district court and Seventh Circuit Court of Appeals blocked the 18-hour delay, but attorneys for the State of Indiana want the Roberts Court to clarify whether the substantial burden test from Whole Woman’s Health v. Hellerstedt applies to abortion restrictions passed in the name of “protecting fetal health” rather than patient health and safety. Tuesday’s conference will be the fourth time the Court considers taking the case.

Then there is the case of Veronica Price v. City of Chicago: a challenge by anti-choice clinic protesters to Chicago’s “bubble zone” ordinance. The Chicago ordinance creates a “bubble zone” around abortion clinics in the city to regulate clinic protests. People are prohibited from intentionally coming within a 50-foot radius from the entrance of a clinic and closer than eight feet to any other person (unless given permission) “for the purpose of passing a leaflet or handbill to displaying a sign to or engaging in oral protest education or counseling with such other person.” A lot is on the line in the case. In 2014, the Roberts Court struck down a Massachusetts buffer zone law but left in place the underlying precedent that permitted the kinds of abortion protest regulations at issue in Veronica Price. Attorneys from the conservative law firm the Thomas More Society, argue the bubble zone violates anti-choice protesters’ First Amendment rights and want that precedent overturned. Such an outcome could be deadly for providers, who are facing unprecedented levels of violence and threats, as the National Abortion Federation has found. If the Court takes Veronica Price and strikes Chicago’s bubble zone, we could expect the scene around clinics to get even more dangerous.

That’s just a preview of tomorrow. Attorneys from the American Civil Liberties Union last week filed their request for the Roberts Court to take up a challenge to a Kentucky mandatory ultrasound law that the Sixth Circuit Court of Appeals allowed to take effect. The Court will consider taking that case later in the year.

Also later this fall: The Court will consider taking Fulton v. City of Philadelphia, a case involving a challenge to the City of Philadelphia’s decision to suspend foster care referrals to Catholic Social Services after learning the agency was refusing placements with LGBTQ families and allegedly requiring potential families to provide a “pastoral reference” before they could be considered for placement. The lower court and Third Circuit ruled in favor of the city. Attorneys from the Becket Fund for Religious Liberty, which represents Catholic Social Services, filed an emergency petition with the Roberts Court last August, but the Court declined to intervene then. However, Justices Samuel Alito and Neil Gorsuch dissented and said they would have blocked the lower court ruling in favor of the City of Philadelphia. Attorneys from the Becket Fund hope this time they can get the votes needed to grant cert and hear the case.

Religious refusals could be before the Roberts Court again with a followup to last year’s Masterpiece Cakeshop v. Colorado Civil Rights Commission case, in which the Court punted on the question of whether a religious objection to marriage equality can justify a failure to comply with public accommodations law. The case is Arlene’s Flowers v. Washington and involves a Washington florist who refused to provide flowers for a same-sex wedding. If the case sounds familiar, it should—the Roberts Court had already considered taking it up last year but instead sent the case back to the lower court following the Masterpiece Cakeshop decision, with the instruction to the lower court to take another look at its ruling in light of that outcome. Well, the Washington courts did, and the Washington Supreme Court once again ruled against the florist. Attorneys from the Alliance Defending Freedom are back before the Roberts Court, insisting the Washington Supreme Court got it wrong and that there is a First Amendment right to discriminate against LGBTQ people.

The Roberts Court could decide to take none of those cases and this term would still be a historic one for civil rights. On October 8, the Court will hear arguments in a trio of cases that asks whether Title VII of the Civil Rights Act’s ban on sex discrimination also bans discrimination on the basis of gender identity and/or sexual orientation. In other words, can your boss fire you for being LGBTQ? The Roberts Court is going to decide that question later this year.

Last but not least, the Court will hear a case that could force states to fund religious schools. Espinoza v. Montana Department of Revenue involves a challenge to Montana’s “Blaine Amendment,” which explicitly prohibits state funding of religious schools. But in 2015, the Montana legislature passed a bill that allowed families to receive tax credit if they sent their children to a religious school. The Montana Supreme Court struck down the program in 2018 as a violation of the state’s Blaine Amendment. Attorneys from the conservative litigation group the Institute for Justice filed their petition for review with the Roberts Court in March, arguing that the Court’s 2017 decision in Trinity Lutheran Church v. Comer should apply to state aid of religious schools as well. In that decision, the Court blessed government grants going to churches and other religious institutions. We will know later this year if the Roberts Court agrees.

The Court could issue orders as soon as next week in the abortion rights cases, and by the end of June we could know if it’s legal for your boss to fire you for being LGBTQ and if states must fund religious schools. Conservatives know they have a majority of justices sympathetic to their issues on the Roberts Court and are pressing their advantage while they can. But cases like June Medical Services and Veronica Price aren’t the products of conservative jurisprudence at the lower court level; they are the products of conservatives on federal courts going off the rails and directly attacking civil rights and judicial precedent. Will Chief Justice John Roberts endorse these efforts? That’s the central question of this Supreme Court term.