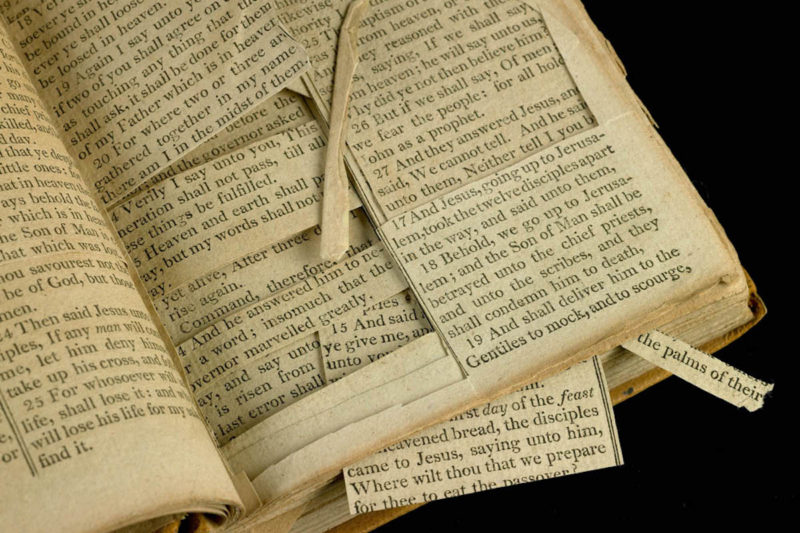 Thomas Jefferson was quite open about tailoring the Bible. Others, less so. National Museum of American History/flickr

In a recent podcast interview, Democratic hopeful Pete Buttigieg noted that some Christians have read the Bible as saying life begins at “first breath.” Buttigieg also noted that, regardless of what any individual believes about the Bible, “the person who should be drawing the line [on when life begins] is the woman making the decision.” Although his “first breath” remarks stirred a firestorm of controversy among religious conservatives, the belief that life begins at birth was widely accepted as “the biblical view” among evangelical Christians only a few decades ago.

In 1968, Christianity Today, the nation’s leading evangelical magazine, hosted a gathering of evangelical leaders from across the country for a symposium on human procreation. Led by theologian Carl F.H. Henry, participants produced a joint statement representing “the conservative or evangelical position within Protestantism.”

While affirming that developing life has some value throughout pregnancy, they were not comfortable assigning full personhood until the very end. “From the moment of birth,” the consensus statement affirmed, “the infant is a human being with all the rights which Scripture accords to all human beings.”

In case the authors had left any confusion as to “when life begins,” one of the symposium participants clarified in an accompanying issue of Christianity Today:

“God does not regard the fetus as a soul, no matter how far gestation has progressed. The Law plainly exacts: ‘If a man kills any human life he will be put to death’ (Lev. 24:17). But according to Exodus 21:22–24, the destruction of the fetus is not a capital offense… Clearly, then, in contrast to the mother, the fetus is not reckoned as a soul.”

A 1967 issue of the evangelical magazine Christian Life went even further, castigating Catholics for their non-biblical stance:

“The Bible definitely pinpoints a difference in the value of a fetus and an adult. Thus, the Bible would appear to disagree with the official Catholic view that the tiniest fetus is as important as an adult human being.”

For its part, the Southern Baptist Convention issued a 1971 statement advocating liberalization of abortion laws in a range of circumstances, including if the emotional health of the mother was at risk. Wayne Dehoney, a former president of the Southern Baptist Convention, later explained the reasoning: “Protestant theology generally takes Genesis 2:7 as a statement that the soul is formed at breath, not with conception.”

Although Dehoney turned to Genesis 2:7, the key passage for most evangelicals was Exodus 21:22-23 (RSV):

“When men strive together, and hurt a woman with child, so that there is a miscarriage, and yet no harm follows, the one who hurt her shall be fined, according as the woman’s husband shall lay upon him; and he shall pay as the judges determine. If any harm follows, then you shall give life for life…”

In prescribing a fine for causing a miscarriage but “life for life” if harm befalls the woman, the passage seemed to these evangelicals to differentiate between the moral status of the woman and the life inside her.

The history of translation of the Exodus passage is informative, and scholar Mark A. Smith includes a helpful survey in his book Secular Faith. The Latin vulgate in 405 translates the key term as “abortivum,” meaning “has a miscarriage.” The first English translation of the Bible in 1384 preserved this understanding, rendering it as “makes the child dead born,” while the Douay-Rheims translation in 1609 affirms this meaning, translating it as “she miscarry indeed.” The King James (1611), Revised (1885), and American Standard Version (1901) all translate the term as “her fruit depart her,” leaving open the question of whether the fruit departs due to miscarriage or premature birth. Finally, the Revised Standard Version (1952), Living Bible (1971), and New American Bible (1971) returned to “miscarriage” or “miscarry.”

Then in 1978, the year before the Moral Majority was founded by Jerry Falwell, the evangelical publishing house Zondervan produced the New International Version (NIV). For the first time in the history of Christianity, Smith notes, the NIV translated the passage as “she gives birth prematurely,” thereby implying the “life for life” punishment applied to harm caused either the woman or fetus. Subsequent translations produced by evangelical publishing houses followed this translation, including the New King James (1982), New Living Translation (1996), and Today’s New International Version (2005).

As a proxy for broader scholarly opinion on this re-translation, Smith looks at translations produced since then by non-evangelical Bible publishers. Other Protestant Bibles continued to translate the passage as “miscarriage” or “miscarry,” including the New Revised Standard Version (1989), Contemporary English Version (1995), The Message (2001), and the Common English Bible (2011). Hebrew Bibles translated the passage variably as “miscarry,” “miscarriage,” “her fruit depart,” or “child dies,” including the Living Torah (1981), Jewish Publication Society (1985), Complete Jewish Bible (1981), and Koren Jerusalem Bible (2008). And Catholic Bibles, despite official teaching from the Church that there is a right to life from the moment of conception, continued to translate the passage in the traditional way: “miscarriage” or “miscarry” (New Jerusalem Bible, 1985; New American Bible Revised Standard Edition, 2011).

The novel translation of Exodus 21:22-23 allowed the founders of the evangelical Right to neutralize previous, Bible-based reservations about Catholic pro-life activism. By 1980, Jerry Falwell was off to the races. “The Bible clearly states that life begins at conception,” he declared in his book Listen America! Abortion “is murder according to the Word of God.” Falwell’s major reference for this claim was Psalm 139:13, where the author writes that God “knit me together in my mother’s womb.” Most biblical scholars, however, including many in the evangelical community, argue that this passage deals with God’s foreknowledge and omniscience, not with when life begins.

Although many evangelical scholars objected to these new interpretations, others strained to provide additional biblical support. “The Bible shows life begins at conception,” the professor Paul Fowler declared in a 1984 book, Abortion: Toward an Evangelical Consensus. “In the Genesis narratives alone, the phrase ‘conceived and bore’ is found eleven times. The close pairing of the two words clearly emphasizes conception, not birth, as the starting point.” He concludes at the end of the book that “Scripture is Clear!” that life begins at conception.

More recently, the leadership of Focus on the Family, even while insisting on the most stringent and traditional possible reading of passages on homosexuality, happily embraced this reinterpretation of Exodus. And they rummaged through the rest of the Bible to support the newfound belief in personhood from conception with what can only be described as desperation. After asking on their website, “Are the preborn human beings?” they answer that “The Lord Jesus Christ began his incarnation as an embryo, growing into a fetus, infant, child, teenager, and adult.” The one verse they cite as proof is the following: “While they were there, the time came for the baby to be born, and she gave birth to her firstborn, a son” (Luke 2:6-7, NIV).

That evangelicals changed their minds so dramatically on when personhood begins, and in the midst of a political crusade against the sexual revolution, doesn’t by itself show they are wrong. (Many other arguments do that). But it does weaken their claim to be the guardians of traditional morality. And it renders absurd the apoplectic reactions to Pete Buttigieg’s recent comments. When he noted that some Christians have read the Bible as teaching that life begins at first breath, he might as well have been referring to the parents of his own loudest critics.