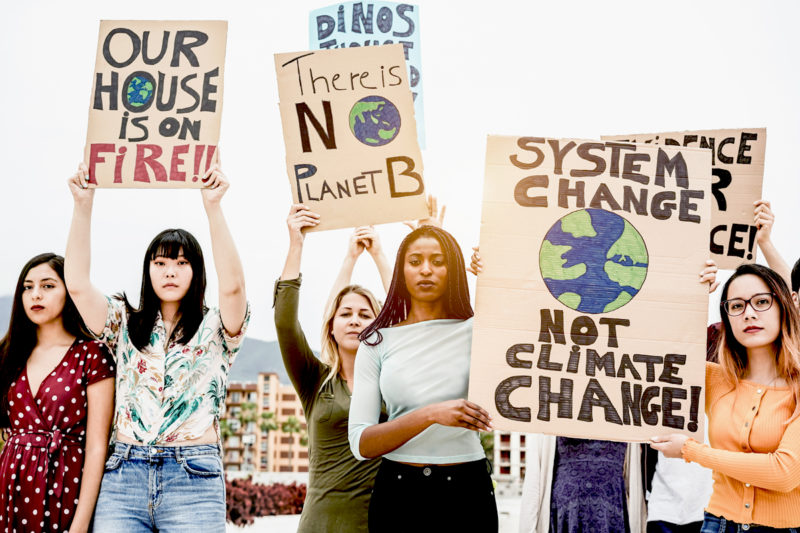 Women are strategically positioned to combat climate change and reduce global carbon emissions, but also stand to lose the most if the worst impacts of a changing planet are not mitigated. Shutterstock

As Democratic presidential candidates share their plans to address climate change and reduce greenhouse emissions, it is vital that these plans center women’s empowerment, enhance bodily autonomy, and prioritize women’s leadership. Voters are increasingly asking questions and airing concerns about climate change and overpopulation, and policymakers must ensure they are using a women’s empowerment framework when answering inquiries and crafting climate policies.

Women are strategically positioned to combat climate change and reduce global carbon emissions but also stand to lose the most if the worst impacts of a changing planet are not mitigated.

It is well-documented that when women are empowered, the planet benefits. Studies have shown that women consume less energy on average compared to men and make lifestyle decisions that reduce their carbon footprint. Research has also shown that countries with more women in political leadership tend to have lower CO2 emissions, pointing to the importance of women’s presence at the decision-making table. And yet, women occupy a minority of government positions—in the United States, women comprise only about a quarter of the House of Representatives and also the Senate, and we have not yet had a female commander in chief.

Women’s bodily autonomy—a necessity for women to pursue leadership opportunities—is key to achieving women’s empowerment and combating climate change. When women are able to control their bodies and make informed decisions about when and if they will have children, they are better able to complete their education, participate in the workforce, and lead in their communities and political office. Integrating bodily autonomy into a climate strategy is a win-win: It honors the dignity of women and also creates opportunities for women to lead the way in reducing global carbon emissions.

Family planning—non-coercive, consent-based, and comprehensive—is a particularly powerful tool in enhancing bodily autonomy and helping women to determine their professional and economic futures. In order to improve the scope and quality of family planning services, the next president must move to eliminate restrictions to reproductive health care in the United States and globally. This includes repealing the Hyde Amendment and domestic and global “gag rule,” ensuring women have access to the full range of contraceptives without the broad religious and moral exemptions we see today, and expanding access to telemedicine for reproductive health services. State and congressional lawmakers must also not be permitted to interfere in women’s health-care decisions and undermine the quality and type of care women receive.

Unfortunately, when policymakers think about climate change and women’s reproduction, it’s often in the context of overpopulation and leads to an insidious solution: population control. This line of thought overlooks the fact that countries with the highest greenhouse gas emissions do not have the highest fertility rates. It also puts the onus for change on women in the Global South and lets powerful actors—like oil corporations and other large polluters—off the hook. And, importantly, when politicians, academics, and the public decide that the solution to address population rates is to control the timing and frequency of women’s childbearing, they are engaging in a dangerous top-down approach that disregards women’s complex lives and bodily autonomy.

Population control is typically considered in the context of unmet contraceptive need. However, women with unmet contraceptive needs do not simply require access to contraception—they must be able to access things like health care, education, quality jobs, and higher wages in order to improve their lives. By pushing policies that dictate women’s reproductive choices, we do nothing to change their circumstances and are prone to repeat shameful mistakes from years past.

Population control is also replete with a history of reproductive coercion and systemic racism. Population control policies have typically targeted low-income women and women of color, whose reproduction is often devalued and criticized. For example, in an effort to reduce pregnancy rates and poverty among Black women and teenagers in the early 1990s, the U.S. government funded family planning programs aimed at increasing the use of Norplant, a long-acting reversible contraceptive (LARC) that cost $300 to purchase and even more to insert or remove. Policymakers went so far as to require women on public assistance to get the implant or risk losing their benefits, even as the legislators cut budgets for other social supports. It was also not long ago—between the 1930s and 1970s—that the United States, prompted by fears of overpopulation, engaged in a large-scale sterilization program in Puerto Rico that resulted in health officials sterilizing about one-third of Puerto Rican mothers, ages 20 to 49, most without consent. These reprehensible episodes represent just a small sample of the dark side of population control policy, which is so often rooted in racism, classism, and sexism and violates women’s fundamental human rights.

Democrats running for president must fight to improve women’s bodily autonomy as an important element of their climate change strategy. Each candidate must consider the impacts of climate change through a gender-specific lens and recognize that, when we center women’s bodily autonomy and improve upon political and economic leadership opportunities for women, the climate and the world benefit.