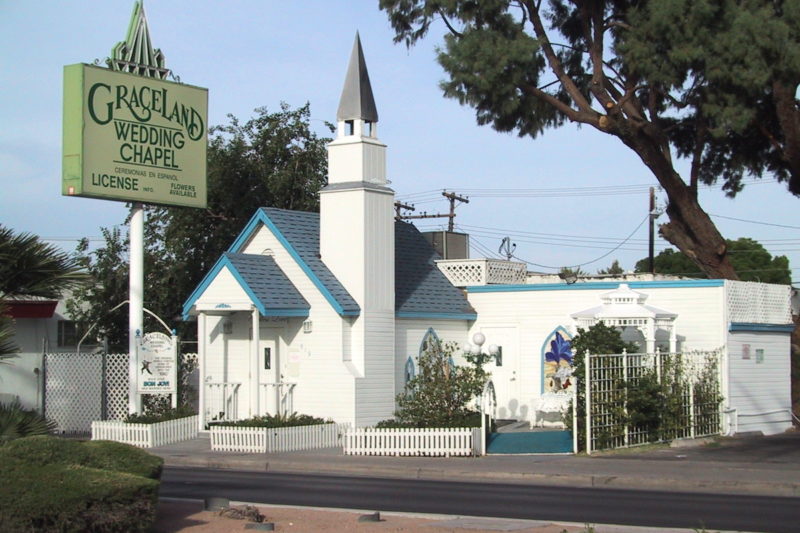 The Graceland Wedding Chapel is being used for its aesthetic value only. According to its FAQ Graceland Chapel does perform same-sex (and presumably interracial) weddings. outofideas/flickr

The owner of a Mississippi wedding hall, Donna Russell, made news last week for refusing to provide space for an interracial marriage due to her religious beliefs. Russell was caught on film stating that “First of all, we don’t do gay weddings or mixed race, because of our Christian race—I mean, our Christian belief. . . .” A Facebook post allegedly written by Russell on behalf of the venue, read:

“after searching  . . . and sitting down with my pastor Sunday night after church I have come to the conclusion my decision which was based on what I had thought was correct to be supported by The Bible [sic] was incorrect!”

It took twenty years after the Supreme Court decision in Loving v. Virginia, banning state laws against interracial marriage, for Mississippi to amend its constitution and remove the amendment prohibiting miscegenation. Loving nullified all state laws in 1967, but Mississippi clerks and courts refused to perform or honor interracial marriages for years after. Even in 1987, a bare majority of 52% of Mississippians voted to remove the language from the state constitution.

Currently, Mississippi has the distinction of having one of the broadest explicitly anti-LGBT laws in the country: the state permits state-licensed child welfare agencies to refuse to place and provide services to children and families, including LGBT people and same-sex couples, if doing so conflicts with their religious belief; it permits state officials to decline to marry couples of whose marriage they disapprove; and it likewise permits medical professionals to decline to serve LGBT clients.

In a fiery opinion from 2016, U.S. District Court Judge Carlton Reeves issued a temporary injunction halting Mississippi’s broad anti-LGBT law from going into effect, finding that “It is not rationally related to a legitimate end.” But the Governor appealed to the Fifth Circuit, who held that the plaintiffs who challenged the law lacked standing (the ability to show an injury stemming from the law). The Supreme Court declined to hear the appeal, effectively letting the Circuit Court’s approval stand and the law to go into full effect.

As the Christian right, bolstered by evangelical donors and the Trump administration, continues to undermine justice for LGBTQ people through religious exemptions based on a narrow theology, rhetoric like that of the Mississippi wedding hall owner gives one pause for thought. In states where same-sex marriages neither need to be solemnized nor honored, are interracial marriages far behind? And if people like Donna Russell believe their refusal to honor interracial marriages is rooted in faith how solid is the holding in Loving?

In fact, this “slippery slope” argument was brought up during oral arguments for Masterpiece Cakeshop v. Colorado Civil Rights Commission by Justices Kagan and Sotomayor, when the former asks: “Same case or not the same case, if your client instead objected to an interracial marriage?”

To which the Cakeshop’s lead counsel, Kristen Waggoner replies: “Very different case in that context.”

Waggoner then explains that the difference is that the objection to an interracial marriage would be “based to who the person is, rather than what the message is.”

Waggoner is trying to make a very specific argument here: that marrying someone of your same gender is a choice, is speech, is not a right guaranteed by the 14th Amendment’s right to Equal Protection under the law because, in her view, and in the view of Alliance Defending Freedom, there is nothing there to protect. ADF, and Waggoner, are arguing that asking a baker to make a cake to celebrate your marriage to someone of your same gender is closer to asking a baker to make a penis cake for a bachelorette party.

The inference, in other words, is that being gay is a choice and therefore that the “message” these two men were trying to convey was the choice to marry someone of the same sex, a kind of message a business ought to be able to reject.

But what of those, like Donna Russell, who believe that interracial marriage is as wrong as same-sex marriage, regardless of legal or theological justification?

In 2018, the Public Religion Research Institute (PRRI) found that Mississippi was one of only six states in which less than half of residents supported the right to marry a same-sex partner. The same poll found that only 57% of Mississippians thought LGBT people should be protected from discrimination, compared to 70% of Americans overall. There aren’t current data on state-by-state support for interracial marriage, but while 18% of all newly married people in urban areas are married to someone of a different race, only 3% of newlyweds in Jackson, Mississippi are married to someone of a different race, the lowest percentage in the country. And the Mississippi Clarion Ledger reported earlier this year that the overall growth in number of interracial couples in Mississippi was behind the national average (less than 2.4 percentage points in Mississippi compared to 2.8 percentage points nationally).

Discrimination on the basis of race is prohibited by federal statute, and states are explicitly prohibited by federal case law from banning marriage for interracial and same-sex couples. But, with conservative Christian legislators, litigators (like the Alliance Defending Freedom, who drafted Mississippi’s anti-LGBT statute), and judges growing in power and number, how slippery is the slope of religious exemptions? And are the exemptions merely codifying what’s already taking place?