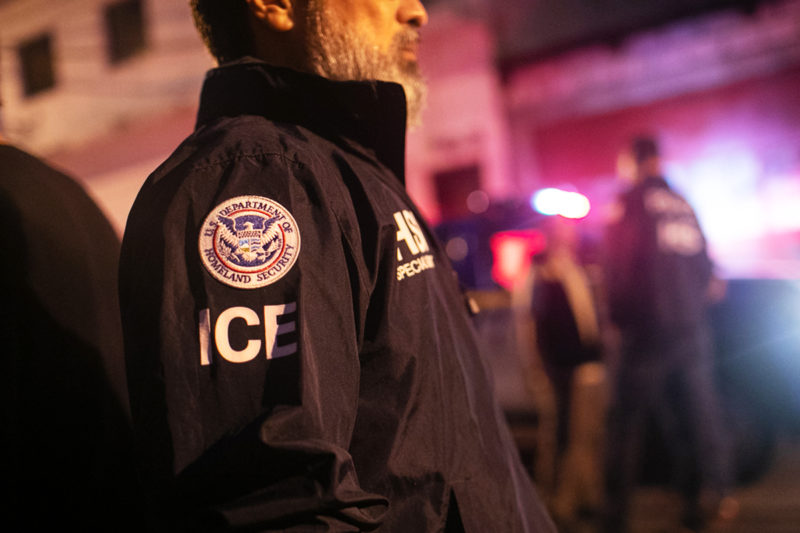 “As policies under Trump are getting more harsh and anti-immigrant, we are seeing our counties increasingly make revenue from these contracts. For people like me, this is really horrifying and antithetical to our values as Democrats, as progressives. That’s why we are pushing our representatives to take a stand,” Rizzo said. John Moore/Getty Images

A movement to increase oversight at county jails and end contracts with federal agencies to hold hundreds of immigrants is gaining momentum in New Jersey, where Democratic leadership has mostly been silent on the issue.

Advocates have long protested officials in Bergen, Essex, and Hudson counties—which they say collectively hold about 1,800 immigrants—for having lucrative contracts with U.S. Immigration and Customs Enforcement (ICE) to house a record number of immigrant detainees in county jails there. On Friday, activists hope to amplify their demands by joining a nationwide action to “end the concentration camps.”

The movement to end these ICE contracts began two years ago. New Jersey Democrats have been quiet about it, despite a damning Homeland Security inspection report this year that pointed to serious health and safety issues at the Essex County facility.

“Money is a big part of it,” said local activist Mary Rizzo, a history professor at Rutgers University-Newark. “The Essex County Correctional Facility, if that’s not full, the county is not making the money it needs to make to balance its budget and that, of course, I think is a problem. Our county should not be funding itself through mass incarceration, whether through criminal or immigrant detainees. We really see this as part of the fight against mass incarceration as well.”

New Jersey has the fifth-largest immigrant population in the United States, and also a prison population of 19,362 in 2018, according to the Vera Institute of Justice. ICE detains about 22,000 in its contracted jails, many at overcapacity. ICE did not respond to interview requests from Rewire.News.

Among them, Essex County holds the most—about 800 detainees—and has the largest ICE contract, worth over $49 million, dating back to 2011. The contract, renewed in 2016, provides $117 per detainee per day. The county anticipates a payment of $42.7 million in 2019 but spends only about half of what it gets on the jail, according to NJ Spotlight.

Despite pressure from advocates to end the contract, the Essex County Board of Chosen Freeholders largely avoided the issue at their meeting Wednesday night, said Whitney Strub, a local activist and director of the Women’s and Gender Studies program at Rutgers University-Newark.

“All three county jails are now majority immigrant detainees,” he said in an email. “After bail reform took effect in early 2017 in New Jersey and jail populations plummeted, ICE detainees became a revenue stream to keep afloat a now-bloated correctional staff.” New Jersey overhauled its bail system in 2017 by eliminating most cash bail and allowing more people to remain free while awaiting trial. This has led to a drop in jail population and detained fewer poor defendants, WHYY noted.

“Our campaign in Essex County has been the overwhelming No. 1 citizen issue at freeholders meetings for the entire past year, and so, continuing to push for universal legal representation for detainees and an independent civilian review body (instead of one staffed by political appointees from the county machine) are top priorities, while also demanding that Essex County find a way to extricate itself from facilitating ICE’s work in a way that protects the rights and security of current detainees,” Strub said.

The continued pressure has led to some change. Last month, Essex County Freeholders President Brendan W. Gill—the only one who has spoken out about ending the contract—led the board to pass measures to provide $750,000 in legal services to undocumented detainees at the Essex County jail.

After Hudson County hastily renewed its contract with ICE, Hoboken and Jersey City councils passed resolutions calling to end the Hudson County contract last August. No legislation has been filed, however. Hudson County holds about 600 detainees and receives $120 daily per detainee.

Last October, the Essex County Freeholders passed a resolution calling to remove ICE spokesperson Emilio Karim Dabul for his ties to anti-Muslim hate groups. But there has been no real change or legislation filed to end the ICE contracts. Passing resolutions and small efforts are hollow gestures to posture to progressives, activists said.

ICE contracts have been terminated in other states, and advocates who are keeping up the pressure are hopeful it can be done in New Jersey. In July 2018, Philadelphia Mayor Jim Kenney said he would end the city’s data-sharing agreement with ICE after sustained pressure from immigrants rights activists. A year ago, officials in Georgetown, Texas, voted to terminate a contract with ICE and for-profit prison company CoreCivic to operate a detention center in a small suburban community.

Many in the Garden State take issue with Essex County Executive Joseph N. DiVincenzo Jr., a powerful Democrat who helped sign the 2011 contract and called it an “innovative” move to keep taxes low. He has been called the “Jack Welsh of correctional facilities” for his “ability to turn inmates into dollars,” as NJ.com reported.

DiVincenzo and the county Democrats’ positions seem to be at odds with the progressive policies of Gov. Phil Murphy (D), who succeeded Republican Chris Christie in 2017 and has declared New Jersey a “fair and welcoming” state. Attorney General Gurbir Grewal (D) has even ordered local law enforcement not to help ICE unless agents have a warrant signed by a judge.

“I think what’s happening here locally speaks to the bigger splits in the Democratic Party nationally,” said Jay Arena, an activist with the Jobs and Equal Rights for All campaign who ran unsuccessfully against DiVincenzo last year to fight ICE deportations.

Politicians like DiVincenzo and presidential candidate U.S. Sen. Cory Booker (D-NJ), who supports DiVincenzo, are part of the powerful machine that many are afraid to go against.

“In his attempt to appear progressive, Booker is taking a stance around the immigrants, but he was just here, and there was a protest against him when he held a fundraiser with DiVincenzo, who is running the ICE jails, and he did not call for the ending of the contracts,” said Arena, a sociology professor at CUNY’s College of Staten Island.

On the one hand, Booker has called for ICE hearings. On the other, he attended a $2,800-per-person fundraiser co-hosted by DiVincenzo and South Jersey power broker George E. Norcross III in Essex County two weeks ago.

Although many of the ICE contracts were signed under President Barack Obama, widely referred to as the “deporter in chief” among immigration activists, the issue has been magnified due to Trump’s inhumane asylum and migrant policies at the border.

“Nationwide, nearly 25 percent of immigrants in detention are held in local jails in beds rented to ICE,” Wanda Bertram, communications strategist at the Prison Policy Initiative, said in an email. “Most, if not all, of these detainees could be released to be with their families while their cases are pending. It’s highly improper for cities and counties to enable family separation and inhumane treatment to shore up their budgets.”

Strub, the Women’s and Gender Studies program director, said he hopes the crisis at the border will help more residents connect the Trump administration’s “horrendously cruel” detention policies to “the quiet complicity and profiteering of North Jersey Democrats all too eager to cash in on these travesties while offering mere pittances to detainees and their families as face-saving PR moves.”

“In New Jersey, we have seen how Democrats have been complicit with these kinds of anti-immigrant policies for many years through the contracts with ICE which well predate the Trump era,” Rizzo, the history professor at Rutgers University-Newark, said. “As policies under Trump are getting more harsh and anti-immigrant, we are seeing our counties increasingly make revenue from these contracts. For people like me, this is really horrifying and antithetical to our values as Democrats, as progressives. That’s why we are pushing our representatives to take a stand.”