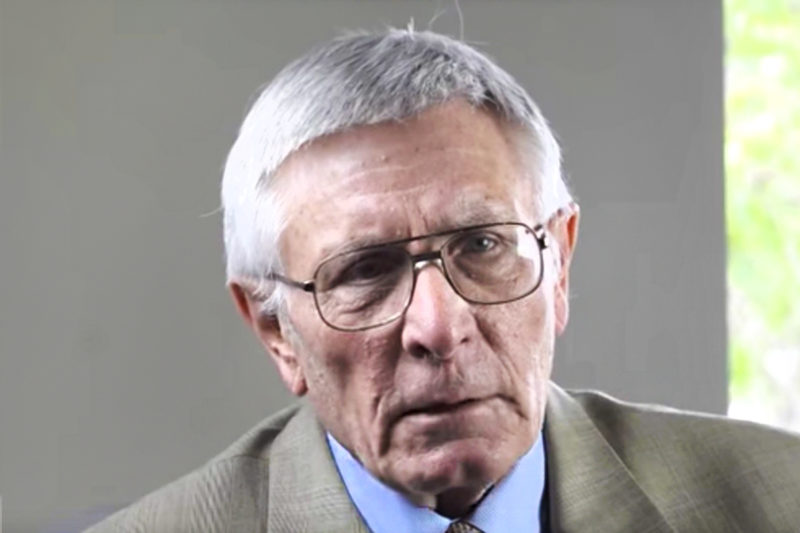 “These people have no concern for the health and welfare of the women we are helping. This is anti-abortion madness carried to a logical extreme,” said Dr. Warren Hern, whose Boulder Abortion Clinic specializes in later abortion. Boulder Daily Camera / YouTube

UPDATE, September 20, 2019, 10:18 a.m.: Colorado elections officials on Thursday approved the signature gathering effort for the ballot initiative that would outlaw later abortions in the state, the Denver Post reported.

Abortion rights foes in Colorado hope to force an initiative on next year’s ballot that would shut down the state’s only clinic specializing in later abortion care.

The initiative, which has to clear a series of hurdles before it can appear on the 2020 ballot, would make it “unlawful for any person to intentionally or recklessly perform or attempt to perform an abortion if the probable gestational age of the fetus is at least 22 weeks,” but pro-choice activists say the ballot measure could ban abortion completely.

Only 1.3 percent of abortions in the United States are performed at 21 weeks or later, according to the Centers for Disease Control.

The ballot effort comes as anti-choice Republican lawmakers have lost power in Colorado, where Democrats control the house, the state senate, and the governorship after Republicans’ disastrous 2018 midterm election.

“These people have no concern for the health and welfare of the women we are helping. This is anti-abortion madness carried to a logical extreme,” Dr. Warren Hern, whose Boulder Abortion Clinic bills itself as “specializing in late abortions for fetal disorders,” told Rewire.News. Criminalizing later abortion would have a major impact on people outside Colorado too, as the state has become a reproductive health-care haven for people in other states.

For decades, anti-choice activists have targeted Hern with vigils, protests, and gunshots through his window, but he has continued to be an outspoken proponent of abortion rights in the media and on his clinic’s website, which states, “The true meaning of ‘family values’ is the freedom to choose your own life and values with those you love.”

Discussing the abortion initiative on a conservative radio show last month, a leader of the ballot effort cited Hern.

“Let’s put the Boulder Abortion Clinic out of business and prevent those lives from being taken every year, and then let’s come back and talk more about it in 2022 and 2024,” Erin Behrens, the sponsor of the anti-choice ballot measure and an ardent Trump supporter, told Denver KHOW radio host Dan Caplis on May 23.

Colorado, where lawmakers loosened abortion restrictions before Roe v. Wade, is one of seven states that allows abortion based on the medical needs of the patient and the judgment of a doctor, regardless of the gestational stage of the pregnancy.

As a result, says Gena Ozols, political director of NARAL Pro-Choice Colorado, a ban on later abortion could “actually do some real damage” in Colorado, as opposed to other states where such abortions are not available anyway.

“The goal and the target here is to shut down Dr. Hern, but this is part of a larger coordinated effort to redefine abortion as a nonmedical term and to scare doctors who can’t know the gestational age of a fetus,” Ozols told Rewire.News, pointing out that the initiative omits any mention of the medical need for abortion care.

Ozols said the text of the ballot initiative uses the word “child” instead of the medical term “fetus,” opening the door for courts to interpret the measure as giving legal “personhood” protections to fetuses and criminalizing abortion and many forms of contraceptions.

Still, some abortion rights opponents in Colorado are against the measure because it doesn’t go far enough. This reflects the thinking of some national anti-choice groups pushing for an end to legal abortion in the United States.

“Our misguided pro-life allies have presided over decades of regulating child killing,” Bob Enyart, a spokesman for Colorado Right to Life, told Rewire.News. “You don’t regulate crime; you deter crime. Once again, they increase confusion where only truth should be proclaimed. Their immoral initiative 108 seeks to protect children ‘who can survive outside the womb.’ But what about the rest of them?”

Colorado voters have overwhelmingly rejected three “personhood” initiatives that would have banned all abortion, most recently in 2014. All three ballot measures were intensely opposed by pro-choice groups.

The 2014 measure, which was rejected by 65 percent of voters, would have defined a “person” in Colorado’s criminal code to include “unborn human beings,” subjecting a pregnant person whose fetus was injured or lost to criminal charges for murder, recklessness, or abuse.

A 2010 measure, which lost in a 70-30 vote, would have defined a “person” in the state constitution as “every human being from the beginning of the biological development of that human being.” A 2008 anti-choice measure, opposed by 73 percent of voters, was similarly worded.

This year’s initiative states that procedures should not be considered an “abortion” if “done with the intent to: 1) Save the life or preserve the health of the embryo or fetus; 2) Remove a dead embryo or fetus caused by miscarriage; or 3) Remove an ectopic pregnancy.”

An abortion would be allowed after 22 weeks if “necessary to save the life” of the pregnant person. In such a case, the pregnancy should be terminated allowing for the “best opportunity for the fetus to survive, unless, in reasonable medical judgment, termination of the pregnancy in that matter would pose a greater risk of death” to the patient.

Unlike the three failed “personhood” amendments, the current proposal would create a law instead of a change to the state constitution, which requires a more challenging signature-gathering effort to make the ballot. That means if the measure passes, Colorado lawmakers could amend the statute—or overturn it.

But the later abortion ban has a long road before it can even appear on the 2020 ballot. It must clear the state title board, and then anti-choice organizers, calling themselves the Coalition for Women and Children, would have to collect 124,632 signatures.