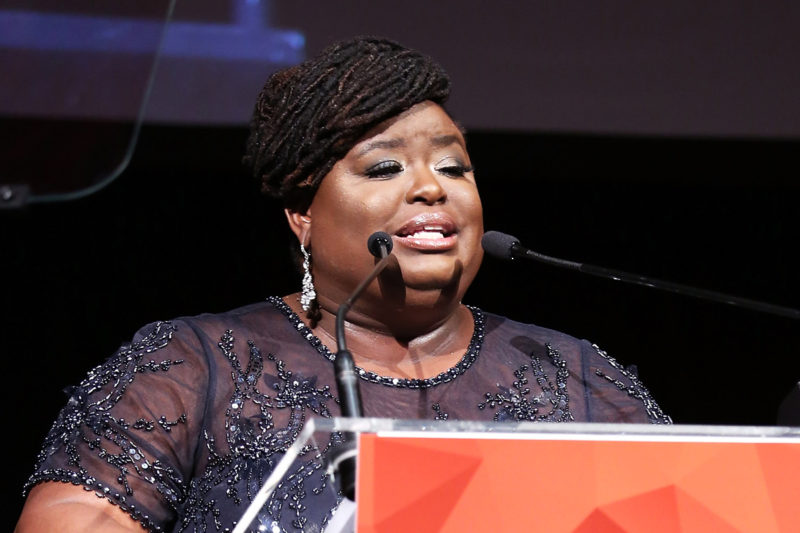 “The idea of [boycotting Georgia] is a position of privilege,” Monica Simpson said. “‘I don’t have to spend my money there; I can go to another state.’ That’s not something that those of us who live here can say. We are urging quite the opposite: investment, so the people who are doing the work can do it in the long term.” Monica Schipper / Getty Images

Ree Adcock-Gustin of Huntsville, Alabama, is used to the “Baptist Bible thumpers in the lege” not listening when she advocates at the state capitol. She’s used to seeing family and friends brace themselves for her frequent rants about the anti-abortion politics of her state’s lawmakers.

“People know they better buckle up, buttercup. Because Uncle Ree has something to say,” she said, laughing and referencing a family nickname during an interview with Rewire.News.

But as Alabama Gov. Kay Ivey (R) signed one of the nation’s most restrictive abortion laws last week, Adcock-Gustin, who is the research director for Alabama Reproductive Rights Advocates, finds herself torn between welcoming outside support that would amp up pressure and wishing that national groups and individuals wouldn’t write off the efforts of reproductive rights activists in her state. Colorado Secretary of State Jena Griswold announced that her department’s employees could not travel to Alabama for trainings and professional events. Maryland’s comptroller, who manages the state retirement and pension fund, is pushing for the pension piggy bank to divest from any Alabama resources, suggested a similar travel ban, and plans to limit Maryland’s contracts with Alabama businesses. And in Georgia, some film production companies and actors have pulled out of the state or have vowed to take their work elsewhere despite the state’s generous tax rebates for productions on its soil.

Adcock-Gustin is concerned with how boycotts could be a blunt instrument and hurt Alabama workers, even those who may not even have an opinion about abortion. But money talks. And in this case, she knows keeping that money away from the state also fits into widespread cultural narratives about the supposed backwardness of the Deep South.

“I can understand companies wanting to make a statement …. Money does have a way of getting politicos’ attention when all else fails,” Adcock-Gustin said. “But we’ve become a joke. That inhibits the boots-on-the-ground work when people say, ‘What can you expect from Alabama?’ The Alabamian in me says, ‘Don’t desert us. We’re not that bad.’ We have to fight on two different fronts: the ridiculous laws, and then we have to fight people who are supposed to be our allies, who are telling us we aren’t worth it, and they’re leaving.”

Responding to the national demand for ideas of how to help, the youth reproductive justice organization Unite for Reproductive & Gender Equity (URGE), which works in both Alabama and Georgia, unveiled a week of solidarity on Monday with more 40 partners nationwide. Notably, it will promote organizations and advocates from not just Alabama and Georgia, but also from other states where near-total abortion bans have passed or are likely to pass soon, including Kentucky, Louisiana, Mississippi, and Ohio (where URGE has chapters). Each day will focus on a different theme or advocate who’s been working on bans before they went “viral” in the national conscience. It started with recognizing abortion funds and independent abortion providers in the states, and it will honor state legislators who have been working to stem the tide of anti-choice legislation in their own capitols as well.

URGE Executive Director Kimberly Inez McGuire said the boycott buzz is complicated. She does not “support boycotts that aren’t asked for or didn’t originate in the states.”

But not all boycott ideas are originating outside these states. Michele Harmon of the South Alabama Handmaids Resistance Coalition has advocated that pro-choice Alabamians and their allies set their sights on corporations that have supported the governor and legislators who signed or supported the bill, respectively.

“I’m not talking about small-town businesses, our farmers, or the people who work in the 7-Eleven,”she said, but rather large national corporations that have bolstered anti-choice lawmakers. “We’re getting the word out. If everyone, particularly women, knows the corporations that are [partly] responsible for taking away our choices, the choices of their mother and daughters, I think they will step up to the plate.”

Harmon lives in Elberta, near the Florida line, and she’s committed to going that extra 15 minutes to buy groceries on the other side just to avoid spending her dollars in Alabama.

“If a community asks for a boycott in their own state, we have to follow their lead,” URGE’s McGuire said. “We saw in Georgia that, during session, there was some discussion of boycotts. But I support the self-determination of local communities. For us, the question is: ‘What are our young people doing? What are our partners saying?'”

Jenna King-Shepherd of Guntersville, more than an hour outside of Birmingham, has noted some informal calls to boycott local anti-choice businesses. A soon-to-be law student who left her job at her family’s plastics business to work for reproductive rights in the state after last year’s Amendment 2, she’s neutral on boycotts.

Speaking of people who might stop patronizing area businesses, she said: “That’s their choice. I don’t think that’s the most effective way to drive change. I think that storytelling and donating—to Planned Parenthood, the ACLU of Alabama, the Yellowhammer Fund, and the Linda D Foundation [a nonprofit that offers financial support for contraceptive services to people mostly in Huntsville]—are the ways to make change. If the movie industry wants to boycott Georgia, that’s its prerogative. But that’s not all they can do. We’ve got legal battles that need funding, we’ve got stories that need telling, and voices that need amplifying. We’ll take all the help we can get. Support us in any way you can. And I hope this legislation doesn’t head your way.”

Monica Simpson, executive director of the Atlanta-based SisterSong Women of Color Reproductive Justice Collective, said she hopes potential supporters will themselves head to Georgia. Calls for boycotts haven’t put a damper on the organization’s plans to host its “Let’s Talk About Sex” conference in the state in late October.

“In fact,” she said, “there’s real excitement about being in Georgia as a central place to do this work. There’s no better place.”

Roula AbiSamra, Georgia organizer for the National Asian Pacific American Women’s Forum (NAPAWF), said her organization does not support an economic action at this time, in part due to impact on Georgia residents.

“Economic justice is reproductive justice. NAPAWF cannot support an act that purports to pit one form of justice against another. When it comes to a boycott, we must consider whether it is organized and supported by those who are most impacted by the injustice—such as people of color, people who make low-wage jobs, and those who are striving to make ends meet,” AbiSamra said.

AbiSamra continued, “Our ability to make decisions about our lives, families, and communities doesn’t start and end with an abortion ban being signed. Even as NAPAWF members fought for the right to access abortion care in Georgia, we also were fighting for equal pay for women of color, and for protections against discrimination in the workplace. We cannot fully determine with dignity what’s best for us—whether that’s having an abortion, having a child, or how to raise a child—if we have reduced agency and are just barely getting by. Those of us who need economic justice the most should also be prioritized when organizing for reproductive justice.”

SisterSong’s Simpson understands and applauds the impulse to help, but she would prefer solidarity be channeled in ways other than withholding business from the state.

“The idea of [boycotting Georgia] is a position of privilege,” she said. “‘I don’t have to spend my money there; I can go to another state.’ That’s not something that those of us who live here can say. We are urging quite the opposite: investment, so the people who are doing the work can do it in the long term.”

That long-term work, advocates say, means building capacity so groups can challenge decadeslong conservative strategy that is coming to roost; better equipping abortion funds in those states and neighboring ones that will likely have to absorb patients; brainstorming how nonprofits without lobbying arms can contribute; tailoring electoral strategy for the upcoming campaign season; and making sure that people know abortion is still legal in Georgia, Alabama, and other states that have passed bans.

URGE’s McGuire added that creative strategies are always welcome, but that tried-and-true tactics for organizing against abortion restrictions often have been given short shrift.

“I see the appeal of boycotts. But’s look at building power in the South and Midwest, registering people to vote, supporting reproductive justice organizations. Maybe those aren’t new strategies, but they’ve never been sufficiently resourced,” McGuire said. “In this moment, I would urge people to, rather than thinking about what they step back from, think about what they can step into.”