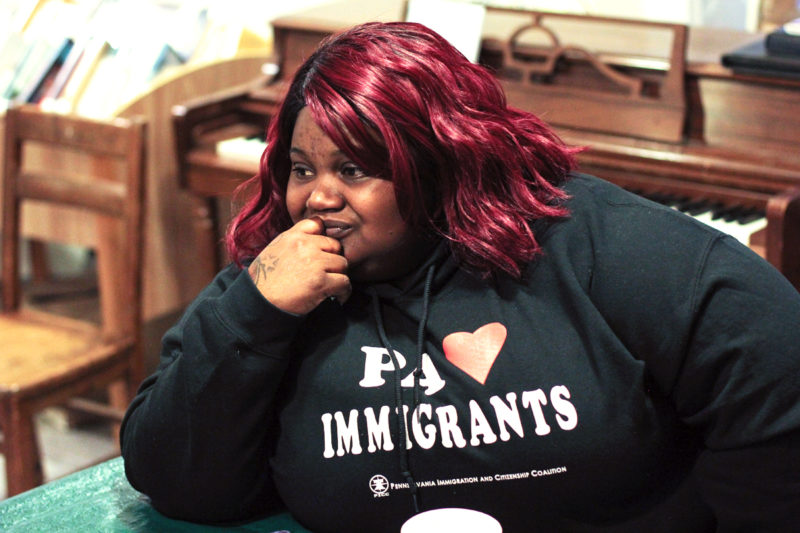 When she was growing up in the United States, Prudence Powell’s family discouraged her from seeing doctors or seeking out health care because she was uninsured and undocumented. The fear was always that the financial cost would be insurmountable, or that “something bad would happen,” Powell said. Marc Faletti for Rewire.News

Prudence Powell says that being a Black immigrant mother in the United States requires incredible resilience, and sometimes that means “suffering in silence.”

The Philadelphia resident experienced this firsthand in 2006 when, two years after moving to Pennsylvania from New York City, she was overwhelmed by the process of navigating the state’s health-care system while pregnant with her now-13-year-old daughter. She ended up commuting back and forth between the two cities because New York offers undocumented immigrants more options for prenatal and postpartum care.

While undocumented immigrants pay billions of dollars in taxes each year, they mostly remain ineligible for health insurance, outside of “a handful of benefits that are deemed necessary to protect life or guarantee safety in dire situations,” the National Immigration Forum reported. Unlike in most other developed countries, maternity care is billed item by item in the United States, making it more expensive than if it were bundled, creating additional hardships for families without insurance coverage.

“It’s never been that Black people don’t want to take care of themselves; it’s about not being able to afford to,” Powell told Rewire.News. “Even if you have health insurance, if you are living paycheck-to-paycheck, how are you going to afford your co-pay? Exams, blood work, people can’t afford it.”

Black Maternal Health Week, founded and led by the Black Mamas Matter Alliance, has forced the United States to reckon with the unacceptably poor maternal health outcomes experienced by Black women, including disproportionately high rates of death related to pregnancy or childbirth. Compared to white women, Black women are more likely to be uninsured, face greater financial barriers to care when they need it, and are less likely to access prenatal care.

Advocates and parents Rewire.News spoke to noted how Black undocumented women are at the center of these complicated realities, and highlighted the major barriers to care for them, as well as the need for a higher standard of care to improve their health outcomes.

When it comes to reproductive and maternal health care for undocumented immigrants, it’s a “patchwork system,” as Jessica González-Rojas, executive director at the National Latina Institute for Reproductive Health, told NBC, one that “depends on where you live and the access that you have to reach certain communities.”

Powell, a 36-year-old Deferred Action for Childhood Arrivals (DACA) recipient and mother of two, was able to access prenatal care in New York City, where her family settled after coming from Jamaica. New York’s Medicaid program is open to undocumented pregnant people, and DACA recipients now qualify for Medicaid in the state. The city also has a Family Planning Extension Program, which can provide an additional 26 months of family planning services to women—regardless of immigration status—who were on Medicaid while pregnant but lost coverage when their pregnancy ended. Medicaid eligibility based on pregnancy ends after a 60-day postpartum period, so the extension program enables people to access two additional years of care if they qualify.

But even with all those options, the city’s 560,000 undocumented immigrants are often left with large gaps in health-care coverage or with no coverage at all.

Like New York, California has some of the most immigrant-friendly policies in the nation, but an estimated 1.5 million undocumented immigrants in the state go without health coverage, according to a 2015 report from the Public Policy Institute of California.

The Affordable Care Act (ACA) did nothing to help undocumented immigrants, who are ineligible for health care subsidies or coverage through the ACA.

Undocumented immigrants often must cobble together funds for health care, paying out of pocket at low-cost clinics, only visiting emergency rooms when in dire straits, or simply going without care. Immigrant and low-income communities of color in Los Angeles frequently turn to cash-only underground clinics for basic health-care services.

For pregnant undocumented immigrants, Planned Parenthood is an option for prenatal and postpartum care. Although the organization has a presence in all 50 states and Washington D.C., immigrant communities are sometimes unaware of the clinics or are afraid to visit them for various reasons, including the harassment they may receive from anti-choice clinic protesters.

Still, in most situations, the cost of labor cannot be avoided. For those without insurance, the average cost to give birth in a hospital, without complications during delivery, is $10,808— “which can increase to $30,000 when factoring in care provided before and after pregnancy,” Business Insider reported last year.

When she was growing up in the United States, Powell’s family discouraged her from seeing doctors or seeking out health care because she was uninsured and undocumented. The fear was always that the financial cost would be insurmountable, or that “something bad would happen,” Powell said.

These fears were not unfounded. U.S. hospitals are legally required to treat a patient until they are stabilized, regardless of their immigration status or ability to pay, as NPR has reported. However, the cost of care can trigger a medical deportation, “a murky area that falls in the gap between federal health and immigration regulations,” said NPR.

It wasn’t until Powell was pregnant with her first child at 17 that she saw a doctor for the first time.

“When I was pregnant with my son, that was the first time I did everything, from seeing a dentist to an OB-GYN,” said Powell.

When Powell later became pregnant with her daughter, she would take the bus or train from Philadelphia to New York City, depending on which mode of transportation was cheaper, in order to access prenatal care. It was a challenging time in her life. Powell was a single, unemployed parent who relied on the meager public assistance she received for her U.S. citizen son. This was before DACA, which means before she had authorization to work in the United States— and it was before she “came out of the shadows.” Traveling back and forth put a bigger financial strain on her, but Powell was more familiar with New York’s health-care system and it offered undocumented immigrants more health-care benefits.

Looking back, Powell—who now works as an office manager at Pennsylvania Immigration and Citizenship Coalition, a Philadelphia nonprofit working to advance immigrant rights—wishes that a more holistic approach was taken with her prenatal and postpartum care. The health care she received wasn’t good, she said, but she was grateful for it.

Gabrielle Jackson, a co-founder of the UndocuBlack Network, an organization founded by and for both currently and former undocumented Black immigrants, told Rewire.News that for those pregnant undocumented people who can access health care in states like New York, access doesn’t often translate to quality care.

“In places that offer health care to immigrant communities, these systems and providers may be overloaded with patients,” said Jackson. “There is [also] a lot of stigma for undocumented people seeking care. How do they know they won’t be demonized?”

“I know that for first-time parents like myself, there is so much anxiety about growing into parenthood, going through pregnancy, and giving birth,” said Jackson, who is also a clinical social worker and therapist. “Access to prenatal care doesn’t mean your provider will be empathetic to your anxieties or take the time to address your concerns and questions. They might just say, ‘You’re fine this month.’”

For undocumented Black pregnant people in particular, Jackson said she wants to see a more wide-ranging, all-encompassing approach to prenatal and postpartum care.

She told Rewire.News she realizes now that she experienced postpartum depression.

“No one talked to me about that. I dealt with it on my own and suffered in silence. At the time, I feel like there was a lack of knowledge and a lack of access to services to really deal with these kinds of issues,” said Powell.

Black undocumented communities fear state violence, they fear being separated from their children, and they fear being placed in deportation proceedings. While these fears often come to fruition for Black immigrants at higher rates than other immigrant groups, Black immigrants are typically erased from these realities by media representations and immigrant rights movements that frame immigration as a Latinx issue. Jackson said all of these things affect the health and well-being of pregnant people and new parents in Black immigrant communities.

“These dynamics impact maternal health outcomes because when Black immigrant women are erased, our stories are not told. And all of the fears we have as Black undocumented immigrants are heightened when accessing care or just trying to navigate the health-care system,” Jackson said. “We know that ICE can show up at a health-care provider. But who will show up for us? Who will acknowledge this is a reality for our communities too?”

“So beyond issues like access and quality health care, there are also issues concerning safety and erasure,” she said.

While there has been some research on health outcomes for the children of Black immigrant families, including the health disparities they experience, “the birth experiences and prenatal behaviors of Black immigrant mothers have received relatively little attention,” the Migration Policy Institute (MPI) noted in a 2012 report.

Health Care “Is for Us”

Sydelle O’Brien also sees the high costs of health care as one of the main deterrents for Black undocumented immigrants. The undocumented child care provider and immigrant rights advocate suffered from a stomach bug for more than week when she decided to see a doctor. The doctor told her to drink water and eat bananas and, according to O’Brien, the visit set her back $1,200.

O’Brien is passionate about helping undocumented communities access care, and hopes to one day fill in some of the coverage gaps for Black undocumented pregnant people by becoming a doula. As Elizabeth Dawes Gay reported for Rewire.News, in communities of color where discrimination and disempowerment in the health-care system is prevalent, doula care can make a big impact.

When O’Brien receives her doula certification, she wants to focus on helping undocumented Black women through the transition of becoming a parent.

“My ultimate goal is to help women and help them learn that they have a voice in their pregnancy,” O’Brien said. “Doctors abuse their power, they make health-care decisions for women based on what’s convenient for them; not on what is best for the patient. Black women’s voices not being heard is one of the biggest issues impacting their maternal health.”

O’Brien told Rewire.News it’s clear how access and citizenship play out in pregnancy outcomes. Ultrasounds and doctors’ visits cost money, she said, and if a person with access, citizenship, and no fear navigating the health-care system one day becomes concerned for their fetus, they can go to the doctor. An undocumented immigrant woman without health insurance may postpone a doctor’s visit, even if they fear something is wrong, because of the cost.

“Not being able to afford care or being blocked from accessing care puts a person at risk of experiencing pregnancy complications. It can make undocumented people feel like health care isn’t for us,” O’Brien said. “But it is for us. When I become certified, I want to create a support system for undocumented women, so they know they have a community, they have a support system, they have people willing to advocate with them who are personally invested in them—because they deserve that.”