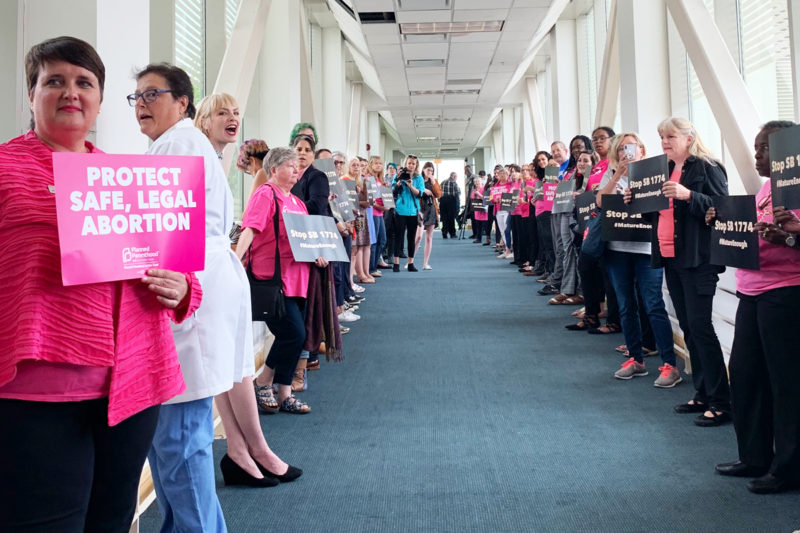 On Monday, the Florida Senate Committee on Health Policy heard testimony on SB 1774, the more extreme version of the parental consent bill. Courtesy of Stephanie Loraine

Recently, news went viral about Florida’s attempt to change its state law about parental involvement in the abortion decisions of minors. Florida law requires minors to notify a parent before having an abortion, while the bill making its way through the legislature makes minors obtain their parents’ consent before having an abortion. In both cases, should a minor be unable to meet that requirement, they need to go to court and obtain at least one judicial bypass from a judge to go forward with their abortion decision.

On Monday, the Florida Senate Committee on Health Policy heard testimony on SB 1774, the more extreme version of the parental consent bill; its counterpart, HB 1335, is expected to reach the house floor for final vote soon. In addition to requiring two separate judicial bypasses for minors who cannot obtain consent, the senate version of the bill also requires doctors to report “the number of times [a patient] has been pregnant and the number of abortions that have been performed on her”—further stigmatizing minors seeking abortion care.

For those of us who work in reproductive justice, it was affirming—and slightly surreal—to see so many people getting outraged about parental involvement laws, an issue advocates have tirelessly fought for people to understand. At the same time, we were dismayed that many people seemed surprised at the absurdity of Florida’s law’s very existence.

Laws like the one in Florida are among the most common abortion restrictions in the nation: They exist in 37 states.

Parental involvement laws, in short, require young people to either involve a parent in their abortion decision or to go to court to get permission from a judge. There are two kinds of involvement laws: “parental notification” laws, where young people have to notify a parent of their abortion decision, or “consent” laws, where they need a parent’s consent. The laws can vary broadly in terms of age, whether one or both parents need to be notified, and whether the consent has to be notarized. Exceptions also exist in some states in cases of rape, incest, and the health of the pregnant person.

Amanda Bennett, former case manager and current volunteer at Jane’s Due Process, an organization in Texas that helps young people access abortion and navigate parental involvement laws, says ignorance of the existence of these laws is in part because statistically speaking, only a small percentage of people having abortions in the United States are minors.

But beyond that, she says, folks often assume historically liberal states are immune from laws like this.

These laws are also completely unnecessary. The majority of young people involve a parent in their abortion decision; most who don’t involve a different adult other than clinic staff. Young people choose not to involve a parent in their abortion decision for different reasons; in some cases, they may come from conservative or anti-abortion households where they fear they would be judged or face rejection as a result of being pregnant or choosing abortion. Others may live with substance abuse or violence in the home and may not feel safe discussing abortion with their parents. Young people living in the foster care system, or in the care of adults other than their parents, may not even logistically have the option of involving a parent in their abortion decision, relegating them to the judicial bypass process.

“Those who cannot or choose not to involve a parent do so for reasons rooted in their own safety and well-being, and often have a network of support that includes close family members or other trusted adults,” said Jessica Goldberg, the senior attorney organizing manager at If/When/How: Lawyering for Reproductive Justice.

For young people who cannot or choose not to involve a parent, states are required to offer a judicial bypass: a court proceeding where a judge will rule whether the young person can have an abortion without the involvement of their parents. This typically involves a two-part test; first, the judge will determine if they think the young person is mature enough to decide on their own, and if not, they will then consider if the abortion would be in the minor’s best interest.

Advocates point out that the process itself is more of a problem than a solution.

“The judicial bypass process does not mitigate the burden created by forced parental notification, and is itself a burden and barrier to abortion access,” Goldberg said.

Getting a bypass requires a young person to navigate a confusing and intimidating system to get a court date, which could delay their abortion care, making it more complicated and more expensive.

“I think it plays into stigma about young parents and lets us pretend these laws work as long as a teen is mature enough, or as long as we can make her seem mature enough in court,” Bennett said. “These laws are not about maturity—they are about giving adults power and control over young people’s pregnancies.”

Lucy told Rewire.News that before she had her abortion, she was denied access both to birth control and Plan B. Her family is conservative and lives thousands of miles away. Because of her state laws, a judicial bypass was her only option; she says she spent days studying so she could plead her case to a judge for what was like an “interview to get health care.” Lucy, whose name has been changed, finds that people are unaware of parental involvement laws when she tells her story through the Youth Testify abortion storytelling project.

“It’s interesting to see their horrified expressions when they hear my story because I took many steps to avoid what I had to go through,” she said. “When everything failed, I was punished for my own decision to go through with an abortion.”

Another Youth Testify storyteller, who asked not to be named, said she wasn’t aware of parental involvement laws until she faced the process. As a mother who had been living on her own for two years at the time, she’d faced age-related barriers to health care, but told Rewire.News getting an abortion “was even more difficult than I imagined.”

She says the judge who oversaw her judicial bypass hearing asked her invasive and degrading questions, including asking how many sexual partners she had. She says the judge only deemed her mature enough to make the decision when she explained how, as a mother already, she had starved herself to feed her daughter. And like Lucy, she says most people she tells her story to are unaware these laws exist.

“Everyone I have told about my experience has apologized to me because they cannot imagine having to beg and plead to some stranger for an abortion while the entire time he is trying every tactic to shame you,” she said.

Veronika, a Youth Testify storyteller who also went through the judicial bypass process, says even people who work in reproductive rights may be unaware of the impact of these laws.

“Usually, when I talk about my abortion with others and what I had to do to actually get it, people are confused and shocked,” she said. “Even some people in the reproductive justice community are surprised by the restrictions I had to jump through to just get an abortion.”

“When I tell them why I couldn’t get my parents involved and going in front of a judge, they start to understand how hard it is in reality instead of just on paper,” she said.

Veronika says having to go through the judicial bypass process made everything from transportation to finances more difficult; the longer she had to be discreet and keep her pregnancy from her strict parents, the harder it became. A process that should have been quick, she says, took weeks; she points out that laws that restrict later abortions come down especially hard on minors for this reason. She thinks this is what the law is designed to do, though.

“The judicial bypass is designed to discourage minors because most teens have that fear of going in front of a judge because it feels like we are doing something wrong,” she said.

Young people are capable of making thoughtful decisions about sex and their health care and are deserving of privacy. Rather than arbitrarily restricting abortion for minors, lawmakers need to focus on funding comprehensive sex education that affirms young people’s sexual health decisions and provides them with medically accurate guidance that includes consent. Furthermore, lawmakers must also roll back legislation that limits access across the board, such as waiting periods or ambulatory surgical standards, and push for policies that protect clinic staff and patients from violence and harassment.

Those who choose not to include their parents or guardians in their decision to have an abortion should not be subjected to further scrutiny and shame. We should ensure that they have the information and services available to protect their sexual and reproductive health and to make the best decisions for their lives.