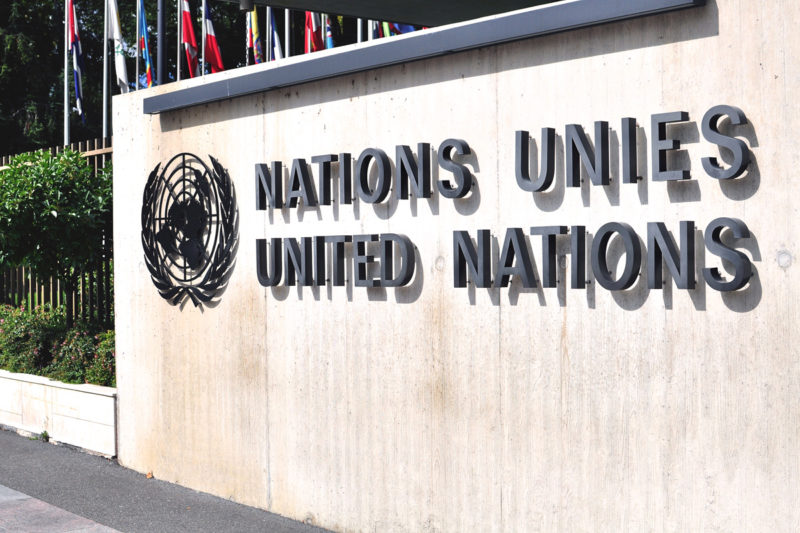 Reports of the administration’s efforts at the United Nations drew criticism from international reproductive rights advocates as well as pro-choice Democrats in the U.S. House of Representatives. Arsenie Krasnevsky / Shutterstock.com

The U.S. delegation to the United Nations Commission on the Status of Women (CSW) tried and failed to roll back support for a landmark 1995 document that has long provided a blueprint for developing the rights, health, and safety of women and girls worldwide.

According to draft documents acquired by The Guardian, the U.S. delegation came into this week’s CSW meetings intending to “water down” commitments to the health and well-being of women and girls as well as remove the word “gender” from the commission’s documents. At issue is the 1995 Beijing declaration and platform for action, a landmark blueprint outlining priorities for the global empowerment of women and girls, including protection from gender-based violence and access to basic reproductive health care. While the agreement is non-binding, advocates often use it to pressure governments into loosening restrictions on women’s lives.

“We are deeply troubled by the attempts of the US delegation to the UN to change the language of commitment to the Beijing Platform for Action from ‘reaffirm’ to ‘make note of,’” Demant said in a statement to Rewire.News. “The Beijing Platform for Action is a landmark international women’s rights document to which the United States and governments around the world have long been committed. By seeking to water down these global commitments, the US government threatens women’s rights. Though these attempts ultimately failed, the US government is once again showing it will use whatever vehicle it can to weaken basic human rights for women.”

According to a recent Washington Post report, U.S. officials have been quietly building an international anti-choice coalition to oppose access to abortion care and reproductive health services worldwide during this week’s U.N. negotiations. “Their position has the backing of nontraditional allies such as Bahrain, Malaysia, Saudi Arabia, and possibly Russia but has drawn strong opposition by many European countries,” the Post reported.

Anti-choice officials from the U.S. Department of Health and Human Services (HHS) reportedly opposed reproductive health initiatives during the U.N. meetings, with HHS spokesperson Caitlin Oakley justifying the administration’s position by explaining to the Post that the meaning of sexual and reproductive health “has unfortunately evolved in the multilateral setting to include abortion.” The U.S.-led coalition has been seeking to “excise references to ‘universal access to sexual and reproductive health and rights’—which they argue promotes abortion and normalizes sexual activity among youth—in an annual document about empowering women,” the Post reported.

Reports of the administration’s efforts at the U.N. drew criticism from international reproductive rights advocates as well as pro-choice Democrats in the U.S. House of Representatives. “We have an administration that is determined to make it impossible for women in this country and around the world to access abortion care,” said Rep. Diana DeGette (D-CO), co-chair of the Congressional Pro-Choice Caucus, in a statement to Rewire.News. “But we also, for the first time ever, have a pro-choice majority in the U.S. House of Representatives, and we are going to continue to fight them every step of the way to ensure women, both here and around the world, have access to the care they need.”

This was the Trump administration’s latest effort to bring its anti-choice policy to the global stage. On his first day in office, Trump reinstated and expanded the “Mexico City Policy,” which reproductive health advocates have dubbed the “global gag rule,” banning international aid from going to organizations that provide abortion care or information about abortion. The State Department has also erased sections on access to reproductive health care from its annual human rights report.

Beyond abortion access, advocates suggest that the administration seeks to use international documents to define transgender people out of existence while also narrowly defining the sexual role and rights of women and girls worldwide. The Guardian reported that the U.N. delegation sought to change references to “gender” in documents to “women and girls”—effectively erasing the legal existence of trans people around the world.

“This is part of the administration trying to create a world in which trans people don’t exist, in which women don’t have control over their bodies, in which religious leaders can overrule basic human rights,” Demant told Rewire.News in an interview. “This is part of that one-two punch of trying to define sex very specifically as immutable and it’s happening at birth and it’s tied to their genitalia, so completely out of sync with medical professionals and medical knowledge. [This] is done in a way that not only erases trans people, [but] defines women and girls’ roles very narrowly and as biologically essential.”

In a speech at CSW on Friday, U.S. Ambassador for U.N. Management and Reform Cherith Norman Chalet reportedly linked the administration’s efforts to erase trans people and restrict global reproductive rights. “We are not about gender jargon. Today, here at the Commission on the Status of Women, we are about women. Women and girls. The life of all women and girls,” she said, according to The Guardian, going on to emphasize the administration’s commitment to obstructing abortion access worldwide.

CORRECTION: This article has been updated to clarify details about the CSW meeting.