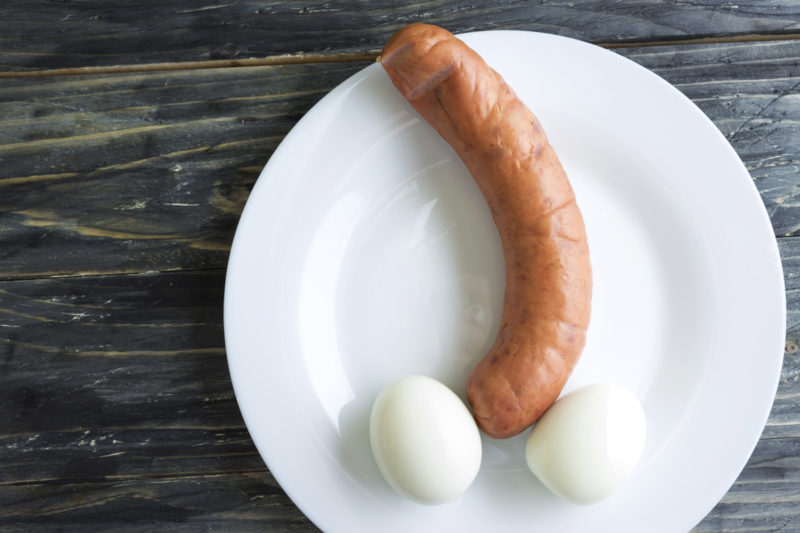 Peyronie's disease is a condition in which scar tissue or plaque can cause bent, painful erections. The scar tissue puts pressure on the inner layers of the penis, causing it to curve or indent when it gets hard. Shutterstock

Peyronie’s Disease: When the Erect Penis Is a Source of Pain

Don Cummings, a Los Angeles-based playwright and author, knows from personal experience that this isn’t always the case. In his forthcoming memoir to be released March 15, Bent But Not Broken, Cummings opens up about his struggle with Peyronie’s disease. It’s a condition in which scar tissue or plaque can cause bent, painful erections. The scar tissue puts pressure on the inner layers of the penis, causing it to curve or indent when it gets hard. The condition, which occurs most often in middle-aged men, can come on suddenly or develop over time. Though its exact cause is unknown, it’s believed to be the result of an injury—be it rough sex, an awkward position, or a sports accident.

Cummings talked to Rewire.News by phone about his seven-year year struggle with Peyronie’s. He believes that he is genetically predisposed to it because his grandfather had a related condition, but he doesn’t know exactly what brought on the disease. He noted that he was catheterized (a medical procedure in which a small tube is threaded through the urethra to the bladder to allow urine to drain) and that some people are injured during this procedure. It’s also possible his condition may be the result of a series of small injuries during sex that he didn’t notice at the time.

But he was lucky. He had heard about Peyronie’s before he was diagnosed and had a pretty good idea of what was going on when he first went to the doctor. An ultrasound confirmed the diagnosis, and he started treatment early. That was important because the longer Peyronie’s goes untreated, the more scar tissue can harden.

He received injections of verapimal, a blood-pressure medicine, directly into the scar tissue to break it up. Cummings described the procedure as an attempt to turn “Cheddar into Swiss.” Off-label verapamil was the one of the only medications available until 2014, when the FDA approved Xiaflex, an injectable drug that contains an enzyme that destroys the scar tissue.

Along with the injections every other week, Cummings did four to six hours of penis traction each day using a device designed to slowly stretch and straighten the penis. Think of the scar tissue as a rubber band that keeps contracting. It has to be frequently stretched, so the penis can get back to its original length (or close to it). Neither of the treatments hurt, but the traction made Cummings pretty much immobile (“lots of reading in bed”).

And there was pain, especially during the first years after his diagnosis. It hurt the most when he had an erection. But even when he didn’t, he would get twinges and feelings that something just wasn’t right.

For the book, he decided to talk more about the emotional pain that came with having a dysfunctional penis and the strain that it put on his relationship with his now-husband Adam.

“Like many men, I got very depressed. In the chronic stage, you don’t know how you’re going to end up. I felt very out of control. I could have ended up completely sexually nonfunctioning. I was in a bad space and it colored my life,” he said. At 56, he’s one of the younger Baby Boomers; he went on to explain that men of his generation put a lot of stock in their penises. “You were taught that it was this very special thing, that it had a lot of pleasure, and a lot of power, and a lot of importance. If that goes wrong, you can just go into depression and shame.”

No surprise, then, that many men tie self-worth to their penises. “Guys, straight, gay, or otherwise, are kind of penis-obsessed,” he said. No surprise then that they don’t want to talk about penis troubles and may avoid seeking help. Cummings hopes that his book can start to change that.

Honeymoon’s Over When New Bride Posts About Hubby’s Micropeen

If the story told by Reddit user “throwaway_peen34” and reported by numerous news outlets is true, a whirlwind romance went south due to a small penis, poor communication, and the unfortunate habit of turning to the internet for advice.

Reddit users first became familiar with the story when Peen (as we shall call her) returned from her honeymoon with her new husband. They had gotten engaged after six months of dating and married six months after that. During their premarital time, they fooled around, but her partner put her off before it “went too far.” He explained he was “old-fashioned like that” and wanted to save sex for their wedding night.

Apparently, the wedding night held a surprise for Peen when she got her first glimpse of her husband’s micropenis. She claims that it was 1.5 inches long.

The new bride went to Reddit’s “Am I An Asshole?” section to ask millions of complete strangers whether she should be angry at her husband for what she interpreted as a deliberate attempt to conceal his condition until after marriage. Many Reddit users felt that her anger was justified. But discussion quickly and predictably devolved into jokes about tiny peckers.

Less than two weeks later, Peen was back to say that her husband had found out she shared details about his body with the world. He wanted to annul the marriage and was considering suing her for defamation of character.

In an update days later, she said her husband wanted her to co-sign a second mortgage to pay for penis enlargement surgery. The cost: Maybe $50,000. He hadn’t wanted a bigger penis until she told the internet that he had a small one. So, in this logic, paying for it was her responsibility. Once again, she asked Reddit if she was an asshole for not wanting to foot the bill. And, once again, Reddit said no.

This Week in Sex thinks the verdict is still out on the asshole question. If Peen and her husband exist, it’s quite possible that they’re both assholes, or at least sadly misguided.

Micropenises are a real, though rare, condition, in which someone is born with a penis measuring less than .75 inches at birth and less than 3.75 inches in adulthood. Hormonal treatments may help especially if started early. If they fail, some people may opt for the surgery mentioned on Reddit, though an enlarged penis will may not be fully functional. But the biggest issues with micropenises are often emotional, because, as we discussed above, many men measure their self-worth and their penises with the same ruler.

As such, we argue that this situation requires sensitivity and communication skills that neither Peen nor her husband seem to possess. In case we need to say it, hiding any potential sexual issues—be they anatomical or emotional—from your partner is a bad idea. They will eventually come to light, alongside the bigger issue of lying or lying by omission. Of course, sharing your partner’s sexual issues with the world is also a bad idea.

If these two people exist, they should have had this conversation long before marriage and far away from the internet.

Peen says she’s heartbroken that their marriage is shattering so quickly, but we think everyone in this situation needs a do-over.

Women Fined for Penis-Shaped Mark Left in Snow by Car

The last entry in our special penis edition involved no real penises at all. It involves a light dusting of snow, a Honda Insight, and overactive imaginations.

A Tennessee women, known only as Kathryn, went public this week with emails sent to her by her homeowners association (HOA) after she was fined $100 for violating the rules on displaying offensive images or slogans. A light snow fell while her car was parked overnight, covering the lot in blanket of white snow. But the space under her car remained dry and black—and someone thought the mark looked like a penis and testicles after she had driven away.

The original email from the homeowner explained: “Your car, specifically the Honda, left this offensive image on the ground after you left. I believe you will see why we have had complaints about it. One of our residents took the photo and reported it to us out of concern for our younger residents.”

Nope. We don’t see it. First, it does not look like a penis or testicles to us. And we’ve been known to see penises everywhere. Second, it was clearly unintentional. Most importantly, however, let us remember that a penis is just a body part like an elbow or belly button. The mere outline of it is not offensive.

In case you were wondering, Kathryn refused to pay the fine. The HOA dropped the matter.