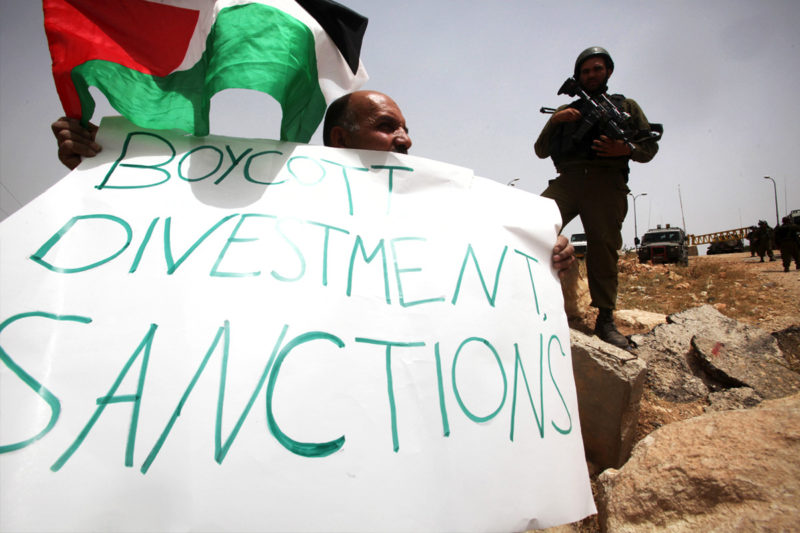 The Boycott, Divestment, and Sanctions movement, which seeks to pressure Israel into complying with international law, is made up of human rights activists, academics, labor unions, and religious people across the world. HAZEM BADER/AFP/Getty Images

Before a tweet by U.S. Rep. Ilhan Omar (D) regarding money in politics included regrettable language about a pro-Israel lobbying group dominated the discussion surrounding U.S. policy toward Israel, U.S. Senator Marco Rubio (R) wrote an op–ed defending a bill that included his Combating BDS Act, which passed the Senate this month.

While Rubio decried “the lies about” his bill, he used over 900 words to engage in his own misdirection about criticism of Israeli policy.

BDS, or Boycott, Divestment, and Sanctions, is a movement working to stop the international backing of Israel and its oppression of Palestinians and colonization of Palestinian land. The movement, which seeks to pressure Israel into complying with international law, is made up of human rights activists, academics, labor unions, and religious people across the world.

The bill in question would signal to state governments that Washington would welcome the passage of state laws that would boycott those who boycott Israel in protest of the country’s occupation of the West Bank. The bill should not be introduced in the U.S. House of Representatives, as the Arab American Institute, where I work, and organizations such as the American Civil Liberties Union, J Street, and the National Coalition Against Censorship have objected to this and similar pieces of legislation as invitations to violate the First Amendment.

We must now look to Speaker Nancy Pelosi (D) to cool the anti-democratic passions of our upper chamber by not introducing anti-boycott language in the U.S. House of Representatives.

No understanding of U.S. discrimination law includes private decisions to not engage in economic activities with foreign governments that participate in terrorism, systemic human rights abuses, or other flagrant violations of international law.

Next, Rubio seeks to paint the law as settled in support of anti-BDS legislation. He does a disservice to his case by citing the U.S. Supreme Court decision Rumsfeld v. Forum for Academic and Institutional Rights as allowing government regulation of “conduct, not speech” but not reading that same decision affirming that the First Amendment protects “conduct that is inherently expressive,” such as flag burning. Rubio neglected to cite the Court’s view that the “right of the States to regulate economic activity could not justify a complete prohibition against a nonviolent, politically motivated boycott…” in 1982’s NAACP v. Claiborne.

Last, Rubio states that “anti-Israel activists” are the chief critics of his bill, citing a website maintained by the American–Israeli Cooperative Enterprise as proof of their intent. While this is a false statement, as many organizations within Israel oppose anti-boycott legislation, the argument fundamentally conflates foreign policy with civil rights. One need not acknowledge the illegality of Israeli settlements in the West Bank in order to stand for the rights of other U.S citizens to do so if they choose.

The U.S. Constitution takes no stance on the validity of any expressive act, only that political expression remains a central avenue in our democratic system. If Rubio’s anti-BDS bill is given a vote on the House of Representatives, it will lend credence to governmental attempts to favor certain political ideas and to ban others, the very power the First Amendment forbids.

Ryan J. Suto is Policy Counsel for the Arab American Institute, an organization that encourages the direct participation of Arab Americans in political and civic life.