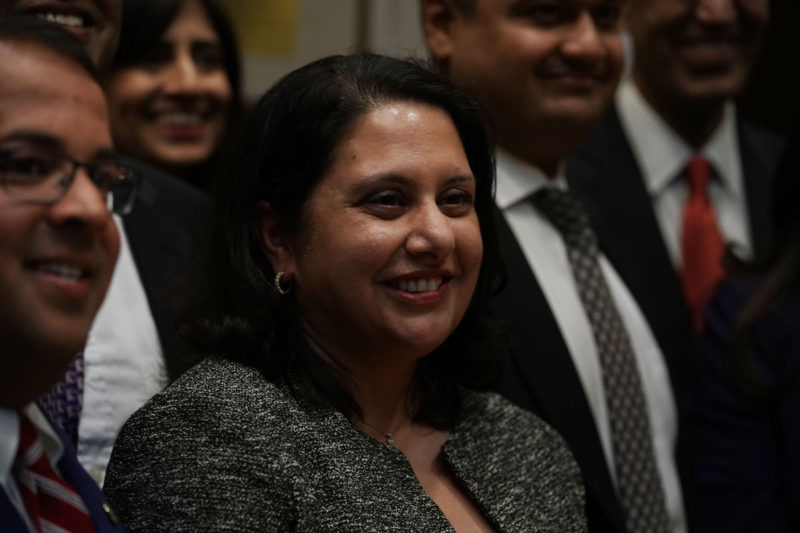 Neomi Rao, whom Trump nominated to replace Justice Brett Kavanaugh on the D.C. Circuit Court, has made the argument multiple times that banning dwarf tossing violates the dignity of those little people who participate in the activity. Alex Wong / Getty Images

Over the last few years, when it comes to disability and the Trump administration, the knee-jerk of nondisabled people is to point to the president’s deplorable treatment of reporter Serge Kovaleski. In our work at the Disability Justice Initiative, we have pushed the nondisabled community to be equally outraged at the horrible policies and appointments being made.

This recently came to a head on November 14, when President Trump nominated Neomi Rao to replace now-Supreme Court Justice Brett Kavanaugh on the D.C. Circuit Court. Rao currently runs the Office of Information and Regulatory Affairs within the Office of Management and Budget. As Mother Jones reported, her past work “hits on all the conservative bugaboos,” making Rao an ideal pick for a president who prioritizes deregulation and unlimited executive power.

It is her frequent use of “dwarf tossing” that has garnered the most media attention, as Rao has made the argument multiple times that banning dwarf tossing violates the dignity of those little people who participate in the activity from the ability to make choices for themselves without interference by the state.

This baseless argument in and of itself should immediately disqualify Rao from serving on the appellate court. But so far it seems it hasn’t.

As demonstrated in The Wolf of Wall Street film, dwarf tossing is loosely defined as a bar game where little people/people with dwarfism are thrown onto a mattress or a Velcro-covered wall while wearing a “specialized suit” or padding. Tossers are scored depending on how far they throw the dwarf.

I want to challenge you readers to stop and imagine picking up a person and throwing them. These are living, breathing people. People with families, people with dreams, somebody’s mother, somebody’s child.

There are a lot of things that people may want to do that are banned because of their impact on others—as Dan Kennedy’s piece earlier this month noted, practicing medicine without a license, cockfighting, underage drinking, and so on. But they’re illegal because people can get hurt. Dwarf tossing legalizes the treatment of people with my disability as less-than people. As objects. As footballs, if you like.

Dwarf tossing does not just put the person being tossed at risk, but the lives of other little people who are not associated at all with the activity, who go about their lives in society minding their own business. Legalizing an activity in a bar does not mean that participating individuals will refrain from taking the “sport” into the street. Let us remember Martin Henderson, whom Game of Thrones actor Peter Dinklage referenced at the Golden Globes in 2011. Following the “prank,” Henderson lived with significant spinal injuries and needed to use a walker or a wheelchair. He passed away in 2016, and no doubt the lifelong injuries he sustained at the literal hands of the drunken English rugby team affected his long-term health.

Furthermore, the argument Rao makes using “dwarf tossing” as a means to discriminate against LGBTQ and racially diverse communities is part of an increasingly common trend of using the disability community and our rights as a weapon to harm other marginalized groups. As Mother Jones explained, “Rao has invoked [dwarf tossing] repeatedly in her writing to make the case that a misguided focus on human dignity is leading US courts to run afoul of the Constitution in decisions that advance LGBT rights and racial equality.”

In the contentious Georgia gubernational race, we saw how long-standing violations of the Americans with Disabilities Act were used in an unsuccessful attempt to close polling places in predominantly African American neighborhoods. Inaccurate reporting claiming that disabled people are participating in “drive-by lawsuits” against small businesses owned by people of color fueled the passage of H.R. 620, which would have decimated Title III of the Americans with Disabilities Act, if not for the resistance in the U.S. Senate led by Sen. Tammy Duckworth (D-IL).

As a little person, this is my reality: I live in Washington, D.C., where I work in public policy, raise a family, and fight back against the daily attacks on our civil rights by the Trump administration. To me, dwarf tossing is a hate crime. It is an activity that specifically targets a marginalized community because we are marginalized. There is no way you can look at this sort of activity as “sport” instead of assault.

As a disabled person, I constantly have to be aware of my safety in a world designed by nondisabled people who frequently perceive of me as an outlier, a freak, or an object of fascination. I catch people following me through stores, taking photos of me and my family without our consent, and I cannot even tell you how many times I have been grabbed, groped, or pulled by people who seem to struggle with the notion of my humanity.

On November 20, Little People of America (LPA), the largest organization representing people with dwarfism and their families, issued a letter to Sens. Dianne Feinstein (D-CA) and Chuck Grassley (R-IA) on the Judiciary Committee, asking them to not support Rao’s nomination. At this time there is no indication of how members will vote for her, but there is the expectation that during her confirmation hearing senators will ask her questions about her use of the subject as it relates to her previous decisions.

LPA and a majority of its membership have actively stood against dwarf tossing for decades. My mother, Joan Hare, served on the board in the 1990s when this issue came up and felt it was her generation of little people’s duty to put this issue to bed once and for all for the good of their children. Society didn’t agree, so here I am over 20 years later making a similar commitment to my children.

The fact that Trump is nominating Rao to any position, let alone a judicial appointment to a bench that is often seen as the proving ground for the U.S. Supreme Court, literally puts the safety and security of people like me directly in the crosshairs. As surreal as some of the policies are that have come out of the Trump administration, maybe the nomination of someone who justifies the targeted assault of a marginalized community is not that out of left field. But what does it say about the current state of society that we aren’t passionately fighting against it?