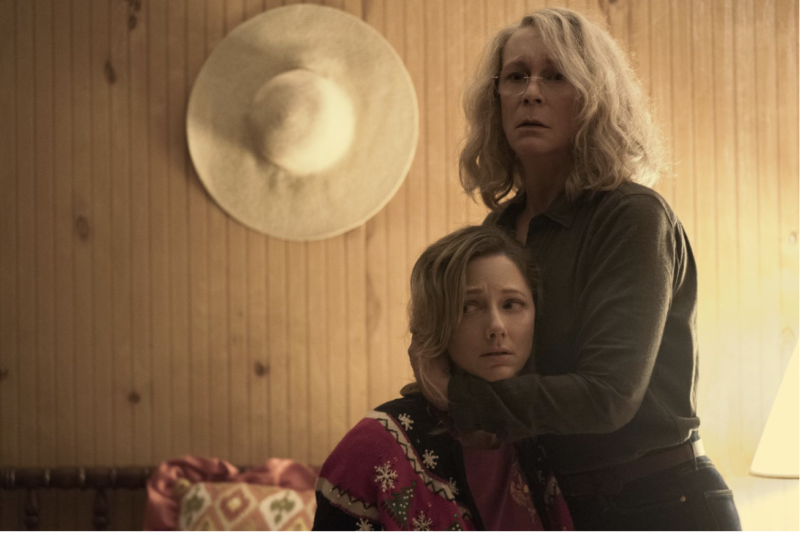 Character Laurie Strode isn't a scared teenager anymore. She's ready for the ultimate battle with the killer who stalked her decades ago and threatens her family now. Ryan Green/Universal Pictures

The night before I saw Halloween, the 11th movie in the horror franchise and a direct sequel to the original 1978 film, I went out with four female friends. How late we were staying at the bar came up, and my answer was simply: Well, I have my knife with me. My Appalachia-born friend, sitting beside me, said instantly: I have mine too.

Living in rural central Appalachia, a neglected and maligned region, an hour from any city, has made me ready. For anything. It has led me to assume the worst at most times: The river will flood, the power will go out, no one is coming. I have canned food, dried beans, space heaters, and propane. I keep the gas tank of my car full, and I store warm clothes, rubber boots, and tools in the back.

I don’t have the weapons arsenal of Laurie Strode, the character Jamie Lee Curtis plays in the newest Halloween film. Nor do I have her fortified basement with its hidden entrance. But otherwise, as a fellow single mama living alone in the country, I can relate to this woman. She’s ready.

Curtis reprises the role she played in the first Halloween film, the John Carpenter classic. In that iconic movie, Michael Myers escapes from the mental hospital he was placed in after killing his sister, determined to kill again. He’s obsessed with murdering teenage babysitters like Laurie. That film, like many in the horror genre, features a “final girl,” a term developed by professor Carol J. Clover in her book Men, Women, and Chainsaws, to describe the teen or young woman character who often survives in a horror film.

The final girl of horror usually is a virgin (having sex in horror movies can get you killed) with a male-coded name or “tomboyish” appearance. Laurie Strode fits several of these characteristics, and her appearance in the first Halloween is considered an early example of the final girl trope.

Forty years later, in the most recent Halloween, Laurie is the final girl grown into a 60-year-old woman (who, many have remarked, looks great for her age). But her character also acts reasonably in terrifying circumstances: the escape of the killer who tried to murder her. She cries once, out of anger. Screams out of frustration. Drinks twice: a mini-liquor bottle in her truck, her son-in-law’s wine at dinner.

None of this behavior seems excessive. Yet other characters react to her as if she’s unhinged, with responses that seem uncalled for at best and sexist at worst. Because those other characters are the ones making mistakes. She’s surrounded by bumbling men who make one inexplicable decision after another—going outside when the killer’s afoot, knowingly riding on a bus with the killer, being fascinated by the killer, and assuming the killer will not kill until he kills them.

Laurie is the only one who makes sense. “I have a plan,” she tells her family—the only time a line like that is uttered in the movie. If the film is trying to portray her as a traumatized victim, it fails.

Laurie seems like a level-headed responsible woman. She seems prepared.

The setting of Halloween recalls my Appalachian home. I know these dark woods that flash by in every single road scene. Characters talk of hunting, rifles, beer. Almost everyone drives a big old truck. Except for scenes of Laurie’s grown daughter’s family, who have left her poor upbringing for a heteronormative, middle class life, the setting doesn’t seem like small-town Illinois, where it’s located. It seems like hill country: small houses with chain-link fences and land, like Laurie’s, turned into fortresses, mini-kingdoms with fortified gates across their gravel driveways, though the paint on the farmhouse peels.

The farmhouse occupies a special position in horror, and the rural has long been a source of nightmares in movies, from Night of the Living Dead to I Spit on Your Grave. Horror films like Wrong Turn often trade in stereotypes of the hillbilly: the country family, left to run amok, and the country cabin far removed from help and the rules of the “real” world.

You must save you.

The trope of the final girl trades on this irony: How surprising that the only survivor is a young girl. I suppose this might have been a surprise to early male critics or audience members, who apparently see strength, guile, and capacity for self-defense as beyond girls.

But to a woman viewer? That’s no surprise at all. No one knows better how to dodge violence than a girl. In a way, we have been training to be final girls our whole lives.

I believe I continue to obsessively watch horror films, even bad ones, in part because it’s knowledge gathering. I explained my love for You’re Next, a film with an excellent final girl, to my boyfriend this way: I’m getting ideas. Nails poking out of boards, under windows that an intruder might step on—that was a new one for me.

My love of horror began young. As children, my sister and I would watch every scary film we could, a passion I can trace back to when I caught the end of 1978’s Dawn of the Dead on late-night television. But what scared us the most was Poltergeist III, set in an urban high-rise. We were also frightened by The Towering Inferno. These were things we couldn’t understand: how to evacuate an apartment in an emergency, how to deal with rich people as the world ended.

We lived in rural Ohio. We were not deterred by country roads, by the big truck of Jeepers Creepers. We would not be frightened by the woods of The Blair Witch Project or the rustic cabins in films like Evil Dead. We would also not be so disrespectful as to trespass onto someone’s land as in Texas Chainsaw Massacre, to disregard directions or warnings from locals in Deliverance or Cabin Fever. City kids get what they deserve.

Halloween’s horror also roots in the rural. Repeatedly, before the really bad stuff, the music fades away and the only soundtrack is crickets. The camera pulls back to show the remote, dark yard.

I’m not a Halloween aficionado. But I am a huge final girl fan. Halloween hints at setting up Laurie’s granddaughter, Allyson, as the final girl, and her character fulfills many of the typical qualities of the trope: She doesn’t have sex. She wears male-coded clothing while dressed as Clyde Barrow for a costume. She even wounds the killer. Maybe she will assume the role of the final girl in the inevitable sequel.

Laurie, however, stars in this one: a badass grandma, a figure familiar to many of us from rural homes. The film’s final stand takes place in her fruit cellar, with homemade canned goods on the shelves next to guns. With her hair of no particular color or style, cheap glasses, jeans and work shirt, she looks like any number of neighbors I regularly see at Walmart. Laurie’s muscles, on display in the film, show the manual work she has to do daily to live, and her steadfastness evidences the emotional work she’s had to do to survive.

What happens when a final girl grows up? Though Laurie says she’s a basket case, twice-divorced, she acts calmly in an emergency. Though she lost custody of her daughter, she’s generous and loving with her granddaughter. Time has allowed her to figure herself and her trauma out.

In several scenes, Laurie stands watching in a menacing pose not unlike that of Michael in the original Halloween. Like the grandmother taking over as head of household, when needed, she’s assumed his role, but for good. The final girl survives the killer—spoiler alert—but the final woman becomes the killer.

Halloween ends with an overt homage to Texas Chainsaw Massacre: three surviving women speeding away in a farm truck. But unlike the seminal 1974 film, these girls aren’t screaming.

And some of these final girls aren’t even girls: They’re rural, senior women doing what they’ve always done: holding it together, living to fight another day.