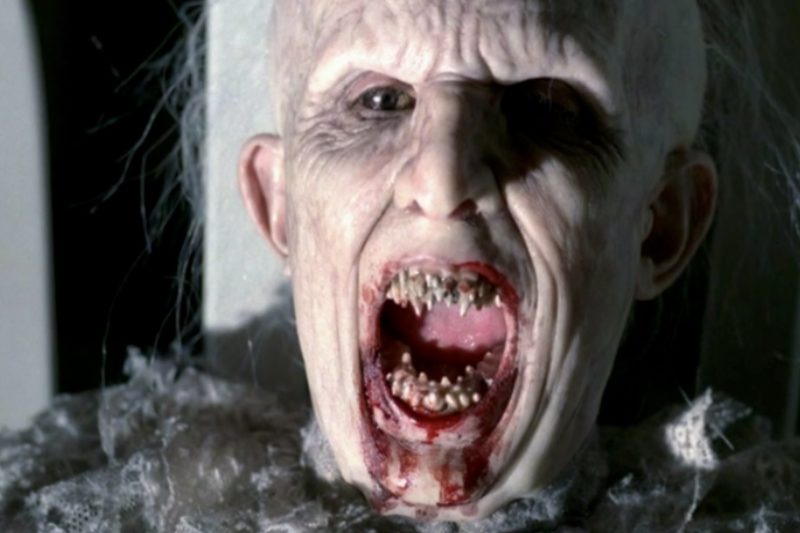 In American Horror Story: Murder House, Dr. Charles Montgomery runs an illegal abortion operation in his basement. When a man finds out Montgomery performed an abortion on his partner, the angry man murders Montgomery's baby son by chopping him up. In a gruesome experiment, Montgomery brings son Thaddeus (pictured) back to life. But he's no longer a cute, innocent baby. FX

For eight seasons, American Horror Story has spun stories of reproductive horror and terrorism that seemed to come from our most disturbed, fantastical imaginations. Although the birth of the Antichrist and tales of nonconsensual sex with ghosts and demons seem outlandish, its farfetched plots have both depicted the dark history of reproductive injustice and recycled stigmatizing images used by today’s abortion opponents.

American Horror Story swings between plots that clearly show outrageous human rights violations and others that seem to blame its characters for their reproductive choices. And while the series is wrapping up its current season, the verdict is still out about whether its producers are trying to show us extremes to avoid—or if it’s showing extremes to embrace. Its mystical and often sickening storylines have repeated “pro-life” talking points by representing abortion as shameful, the result of violence, and painful. But American Horror Story also points out flaws in the pro-choice paradigm, namely the assumption that everyone getting an abortion has the same choice and access.

Back-Alley Abortionists (and a House of Horrors)

In 2011, the first season of the series, “Murder House,” premiered. The show’s opening displays a number of disturbing images of aborted fetuses in jars and mutilated young children. This set the tone for not only the inaugural season but the entire series’ approach to abortion.

Here’s a quick summary of the relevant context: The Harmon family recently relocated from Boston to a Los Angeles mansion after mother Vivien experiences a miscarriage, and the series features flashbacks to tell the stories of the home’s past occupants—and victims.

Among those occupants is Dr. Montgomery, the house’s original owner in the 1920s. Whenever Montgomery and his socialite wife needed money to cover their bills, their basement served as an underground, illegal abortion facility. It’s later revealed that Dr. Montgomery was engaged in deranged Frankenstein-like experiments. He hoped to combine human and animal parts into horrible hybrids.

He eventually stitches together the remains of his son, Thaddeus, who was kidnapped and dismembered by a man angry that his girlfriend had gone to the doctor for an abortion. But the “new” Thaddeus is a monster.

“Murder House” perpetuated anti-choice demonization of abortion and abortion providers. It portrayed abortion as an inhumane practice and the work of an unhinged, money-hungry person—not to mention the idea that fetuses are being dismembered, preserved, and studied in clinics.

The Coat Hanger and Unassisted Abortion

The following season, “Asylum,” takes us to 1964 at a Catholic mental asylum in Massachusetts. Lana Winters (Sarah Paulson) is a lesbian journalist who is wrongfully committed and held in the asylum by the staff when they discover she is there to for undercover journalistic research. There, she’s tortured with conversion therapy and later raped and impregnated by yet another crazed doctor.

Hospital staff deny Lana an abortion—and any support or sympathy. Lana decides to attempt an abortion with a wire coat hanger but fails. Forced to carry to term, Lana gives birth to a son whom she later abandons.

Lana’s story exposes the unjust politicized reasoning that deems abortion as “acceptable” in cases of sexual abuse. Our laws and policies—from the Hyde Amendment onward—make provisions for sexual assault survivors to get abortions, though they don’t make it easy for people to claim that exception. Lana’s tragedy depends in part on the assumption that she deserves an abortion—because she’s an assault survivor, because the medical system harmed her, because she’s violated in so many ways—and that other people don’t.

With its resurrection of the coat hanger, “Asylum” reminds us that even if Roe v. Wade is overturned, abortion becoming illegal won’t get rid of abortion. But it will make access to safe abortions harder, and some people will carry pregnancies to term when they otherwise wouldn’t have, if given real choice.

In “Hotel,” “Countess” Elizabeth Johnson (Lady Gaga) owned the Hotel Cortez in Los Angeles. During a 1926 flashback, the Countess finds herself pregnant by her husband but seeks a later abortion without his knowledge. She claims to be three weeks pregnant despite an obvious baby bump. And when she gets the procedure, baby Bartholomew is alive—monstrous and aggressive.

The writers portray what anti-abortion folk wants you to think later abortions look like: a viable child with terrible side effects. Bartholomew has a formless face, no nose, a cleft palate, several sharp teeth, and an appetite for blood. Although one school of thought believes that Bartholomew might be a supernatural being whose condition explains both his survival and condition, American Horror Story implicitly blames the Countess for having a failed later abortion that caused her child’s severe abnormalities.

The stigmatization of later abortions is reinforced in policy. State and federal government put time limits on when abortions can be performed. In 2003, the “partial-birth abortion ban” was signed into law by President George W. Bush following the U.S. Supreme Court Gonzales v. Carhart case. This prevents people from getting abortions after the fetus is deemed “viable” outside of the womb even though there is no universal or agreed-upon point of viability. And some legislators continue proposing “heartbeat bans” that could essentially allow no abortions after six weeks’ gestation, when few people know they’re even pregnant.

The reasons for later abortions are just as important as those behind earlier terminations. Later abortions will probably rise after the potential overturn of Roe v. Wade. When people have to seek underground resources and support, the process of getting an abortion will likely be drawn out longer, leaving them with more advanced pregnancies when they try to end them.

The “Coven” season centered around the racial tension and power struggle between white and Black witches in modern-day New Orleans. Cordelia (also played by Paulson) is headmistress of Miss Robichaux’s Academy for Exceptional Young Ladies.

Cordelia longs to be a mother in several ways: to have her own biological child and as a mentor to young women with amazing, but often uncontrolled, powers. When medicine and white witchcraft fail and she can’t get pregnant, she turns to Marie Laveau (Angela Bassett), a legendary 19th century “Voodoo” priestess in the city. Cordelia asks Laveau to perform a fertility ritual consisting of animal sacrifices, drums, and semen—all at the cost of $50,000.

American Horror Story mocked a religion that melded African and Catholic beliefs, its sacred practices, and a respected historical figure. The religion comes across as a violent and bloodthirsty practice that sacrifices animals and babies. At the same time as Laveau can summon the power for a fertility rite, she’s also kidnapping baby girls to pay her debt to the Voodoo spirit to whom she owes her immortality.

But this is what reproductive health care could look like when access—even today’s continually narrowing access—is stripped away. Many people—especially people of color—will have to rely on their communities and especially their elders for the care they need. That may not include practices such as Voodoo, but it may require finding treatments heavily influenced by Black and brown cultures, strategies for self-care when health care fails, and experiences of making a way when there is not one.

“Cult” depicted the hell otherwise known as the Judgment House, led by Pastor Charles. Pastor Charles held people he saw as sinners and tortured them according to their offense.

Among them is a woman who has had an abortion. She’s strapped to a table bleeding out and begging for help. But all she gets is Pastor Charles’ voice asking “Who will speak for the unborn?” over an intercom.

As a clinic escort, I’ve seen protesters try to be the voice of illogical, anti-woman reason and also the voice of the fetus. For me, the 20-something woman strapped to that table represents every person that has ever walked past a clinic protester to get their procedure. When employees of fake clinics and clinic protesters publicly shame someone’s choice and dispute their bodily autonomy, it’s equivalent to the emotional and physical torture meted out in the judgment house. We don’t have to turn on the TV for that horror to be real.