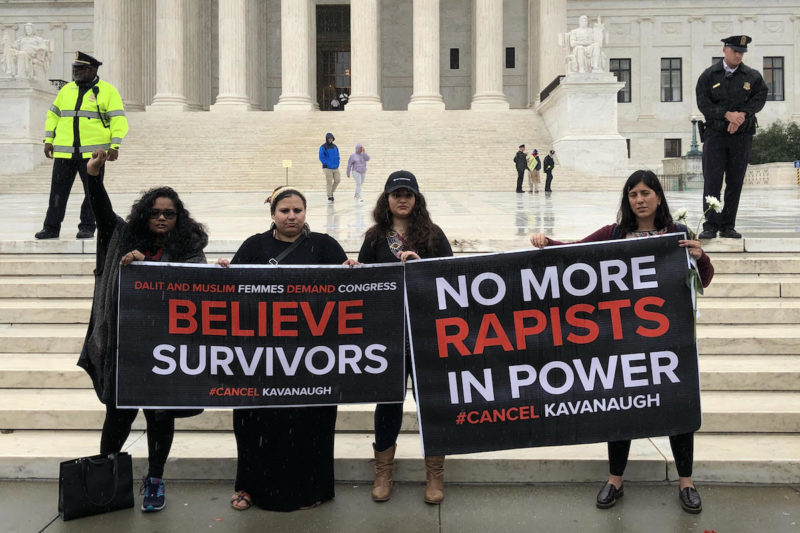 Dalit and Muslim women from Equality Labs and Justice for Muslims Collective have taken a stand to support Christine Blasey Ford and connect calls for justice to a culture of impunity that is foundational to U.S. legal institutions and to the nation itself. Courtesy of Thenmozhi Soundarajan

The courageous testimony of Christine Blasey Ford in front of millions about the painful details of her assault, the bold resistance from survivors across the country, and Kavanaugh’s problematic demeanor should have been enough to disqualify Kavanaugh for this position. By advancing his nomination, Republicans have sent a reminder to many that America is built upon a culture of impunity for white men who believe they are entitled to positions of power even when they may be guilty of committing harm against others. This impunity isn’t new; it’s rooted in a long legacy of white supremacist violence that includes sexual violence as a central tool of oppression, particularly against Black, brown, and indigenous communities on a global scale.

At this moment, thousands of survivors are speaking their truths to demand accountability and justice. The only reason why there is any attention to this nomination is because of this painful and unprecedented resistance from survivors. Inspired by this resistance, Dalit and Muslim women from Equality Labs and Justice for Muslims Collective have taken a stand to support Christine Blasey Ford and connect calls for justice to a culture of impunity that is foundational to U.S. legal institutions and to the nation itself.

As long as we don’t collectively reckon with this foundational violence, we will fail to envision justice beyond constantly begging white men in power who refuse to hear our demands. As we demand our rights from white-led state institutions, we must acknowledge the pain of what it means to go to our oppressors and beg for equity with our wounds and stories in tow. If our current battle makes Republicans take a quick stand of conscience, as it did for Sen. Jeff Flake who called for an investigation into the allegations against President Trump’s nominee, it doesn’t absolve them from the systems and policies they continue to uphold.

Therefore our movements must go beyond solely focusing on legal and policy advocacy processes. We must link these battles with solutions for survivors that aren’t dependent upon carceral feminism, which relies on courts, law enforcement, the FBI, and other agencies that have upheld violence as the law against our communities. These institutions have continuously upheld the rights of white men at the expense of others.

We must resist and build power in these battles against the courts, but we must also learn from our deep losses. Just a few months ago, our organizations were there when the Supreme Court handed down crushing decisions on upholding the Muslim Ban, undermining reproductive rights and workers’ rights, and giving the executive branch far more unchecked power under the guise of national security. These decisions have profound implications for survivors of sexual violence.

While Kavanaugh should not be confirmed as an appointee to the Supreme Court, the Supreme Court as an institution has a long painful history of upholding racist, xenophobic, and white-supremacist decisions that have allowed for impunity. Confronting this impunity means we understand that the rule of law is implemented unevenly in the United States across race, class, gender, and other marginalized identities. Therefore, it is imperative for us to look to alternative mechanisms of attaining justice and what we need to do to shift culture for the long term.

For us, it starts with shifting the focus of survivorship from white cis-women survivors whose stories are heard with more gravity in policy battles than the stories of Black, brown, and indigenous survivors of all genders. It means shifting to the leadership of Black, brown, and indigenous survivors who have been engaging in the work on a daily basis within their own communities through building grassroots projects, initiatives, and speaking to their own communities about rape culture, safety, and well-being for survivors.

It also means learning about the painful histories of how sexual violence is part and parcel of the settler-colonial project, the enslavement of African American communities, and global U.S. military interventions. It means recognizing how the carceral state, which includes prisons, jails, detention centers, and law enforcement agencies, use sexual violence as a tool to control communities. It means recognizing the ways sexual violence is used at the border by Border Patrol officials, at airports by the TSA, and under the pretext of public safety and national security. These painful histories and current truths must be incorporated in our calls for believing survivors. They can also help move us from calls that focus solely on individuals and toward a comprehensive look at how institutions allow for individuals like Kavanaugh to operate with impunity.

And, finally, it must mean positioning sexual violence within broader systems of oppression. Specifically, we need to apply the framework of affirmative consent to recognize that no one consents to the oppressive systems we are brutally forced into every day.

Therefore, it is only through taking leadership from survivors who live at the intersections of multiple marginalized identities that we are able to understand the broad ways sexual violence manifests in our daily lives. This allows for us to create multiple strategies and tactics that prevent us from solely investing in campaigns to move white men in power. It refocuses our energy from heavily investing in legal and policy strategies focused on the national government to investing in deep local and grassroots work led by survivors.

This is why we are asking our communities to hold space for survivors and work toward eradicating sexual violence in all of its iterations. As the Trump administration further solidifies its hold on the courts by placing lifelong appointees on the Supreme Court, making multiple appointments to the federal courts, and implementing harmful policies throughout government agencies, it is critical for our communities to step up to do that work and create ways to address harm.

We must invest then in community and organizational processes of restorative justice that are survivor-centered and trauma informed. We need to also commit to processes of accountability for individuals who have harmed survivors and ensure they aren’t in leadership positions representing communities. Rather than having the focus on innocence and guilt we need to go toward a harm and harm-reduction paradigm both inside and outside our movements.

We also need to put more resources toward education and prevention that push our communities to recognize the root causes of rape culture and how they manifest in our spaces. We can do this by naming intergenerational trauma and sexual violence and its roots in colonialism, slavery, indigenous genocide, caste apartheid, and more. This trauma of sexual violence is passed through generations, and it is important for us to name, address, intervene, and prevent this problem from being passed down. We must confront head-on the shame we feel around naming and addressing this issue. And we must raise resources that support survivors’ recovery and healing by offering community-based funds to cover costs as opposed to survivors’ carrying the burden for a structural problem.

We want to challenge our movements to imagine how our strategies, leadership, and vision for justice would change if our movements against sexual violence amplified the experiences of individuals whose bodies are constantly the battleground for domination, power, and control. Imagine if the experiences of all bodies and genders were amplified, including survivors from gender-nonconforming communities, trans folks, and disabled communities. This would allow us to position sexual violence as a tool of control and domination that sits squarely within multiple structures of power. By centering the groups whose lives are constantly violated through multiple forms of violence, we can move toward transformative wins for all survivors and invest in generative strategies that build our power for the long term.

So let us block Kavanaugh with all that we can this week, and let us also dream about nurturing a survivor-centered world through our visionary demands so that we might not only fight but also heal and, even more crucially, dream boldly of a world without this violence at all.