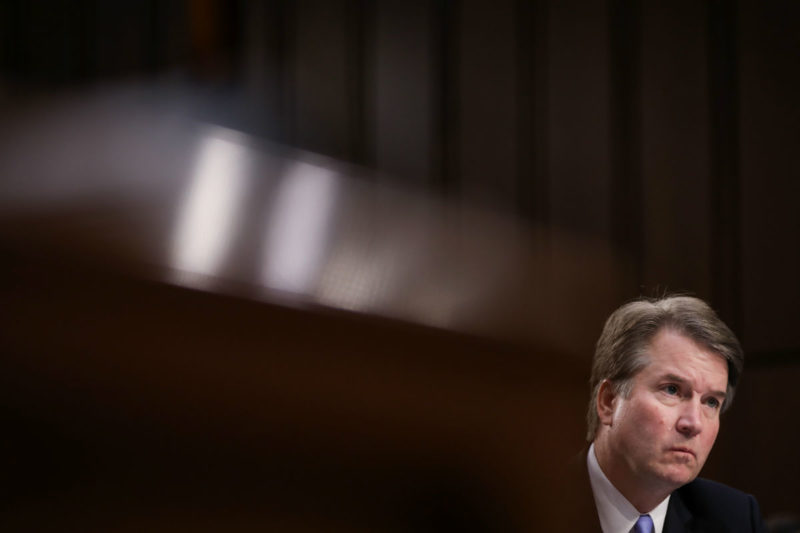 What is owed to a U.S. Supreme Court nominee who has been credibly accused of attempted rape?

Dr. Christine Blasey Ford has accused Donald Trump’s nominee, Brett Kavanaugh, of sexually assaulting her when she was just 15 years old. In a letter sent to Sen. Dianne Feinstein (D-CA), she described how a 17-year-old Kavanaugh attacked her while one of his classmates—now known to be conservative journalist Mark Judge—watched: “Brett Kavanaugh physically and sexually assaulted me during high school in the early 1980’s …. Kavanaugh physically pushed me into a bedroom as I was headed for a bathroom up a short stair well from the living room. They locked the door and played loud music precluding any successful attempt to yell for help .… They both laughed as Kavanaugh tried to disrobe me in their highly inebriated state. With Kavanaugh’s hand over my mouth I feared he may inadvertently kill me.”

For his part, Kavanaugh has denied Ford’s allegations, and to hear Republicans tell it, he deserves to be believed. He is, after all, a great guy: He carpools! He coaches a girls’ basketball team! What’s not to like?

Even though Ford’s allegations are highly believable, Republican senators are working overtime to protect Kavanaugh from having to take responsibility for his past actions. Some are calling for Kavanaugh to receive the benefit of “due process” in light of Ford’s allegations. The suggestion here is that Kavanaugh is owed constitutional due process in the criminal sense—like Miranda rights and a lawyer and the opportunity to confront his accuser. That sounds nice, but the only process due to Kavanaugh at this point has been established by the Senate Judiciary Committee, and it is a process that should more or less mirror a job interview, not a criminal investigation. The stakes aren’t as high for Kavanaugh in this instance as they would be for a criminal defendant—Kavanaugh’s worst case scenario isn’t a prison sentence, after all, it’s just losing out on a lifetime seat on the Supreme Court.

If you watched Kavanaugh’s confirmation hearings, then you know he absolutely bombed his “interview.” He refused to answer questions about his judicial philosophy (including whether or not he believed that marriage equality and Roe v. Wade were settled law), and refused to answer what he called “political” questions about whether he agreed with President Trump that Supreme Court Justice Ruth Bader Ginsburg “has embarrassed [us] all.” When Kavanaugh did answer questions, he lied repeatedly.

It was an abysmal performance from a man who has shown nothing but disrespect for women throughout his life, including as a lawyer who dug up dirt on Monica Lewinsky for the Starr investigation, as a George W. Bush lackey, as a judge on the U.S. Court of Appeals for the District of Columbia Circuit, and, according to Ford, as a drunken high school student. But despite that, he will get a second “interview” on Monday, when he testifies before the Senate Judiciary Committee.

So instead of debating what Kavanaugh is owed, the real question is what process is due to Ford and to other women who have experienced sexual harassment or survived sexual assault at the hands of powerful, unapologetic men.

Any survivor will tell you that our process for reporting harassment or assault, for being believed, and for getting justice is flawed at best. That’s why many women don’t come forward—our society is so hostile to survivors that many survivors don’t want to be traumatized again by scrutiny.

Ford had every reason to feel reticence about speaking out. She is not the first woman to allege sexual misconduct against a Supreme Court nominee. In 1991, Anita Hill testified before the Senate Judiciary Committee that Clarence Thomas had repeatedly and graphically sexually harassed her when he was Hill’s boss. Instead of being believed, Hill was almost blocked from testifying, and when she did testify, she was subjected to inappropriate questions from the all-male senators on the Judiciary Committee—some of whom are still there—attacked by conservative activists, and put under the microscope by the media and the public.

Now that Ford has spoken out, we can’t make that same mistake in 2018. As Hill herself wrote this week in the New York Times, “There is no way to redo 1991, but there are ways to do better.”

Unfortunately, Republicans don’t seem interested in handling things differently or better this time around. Already, GOP senators are aligning themselves with Kavanaugh and attempting to undermine Ford’s credibility.

Sen. Orrin Hatch (R-UT) had the gall to describe Ford as “mixed up” about what happened to her. Sen. Susan Collins (R-ME), wrote a letter to the committee requesting that it force Ford to be cross-examined by Kavanaugh’s lawyer—a shameful suggestion that would literally put Ford on trial. Sen. Bob Corker (R-TN), initially expressed support for delaying a vote on Kavanaugh’s nomination, but later expressed sympathy for Kavanaugh, saying, “I can’t imagine the horror of being accused of something like this.” Not horror for the woman who lived with this trauma for three decades, but horror for the man who allegedly caused it.

Brett Kavanaugh is not owed a lifetime appointment to the Supreme Court. But Christine Blasey Ford—and others like her—are owed our belief and our support.