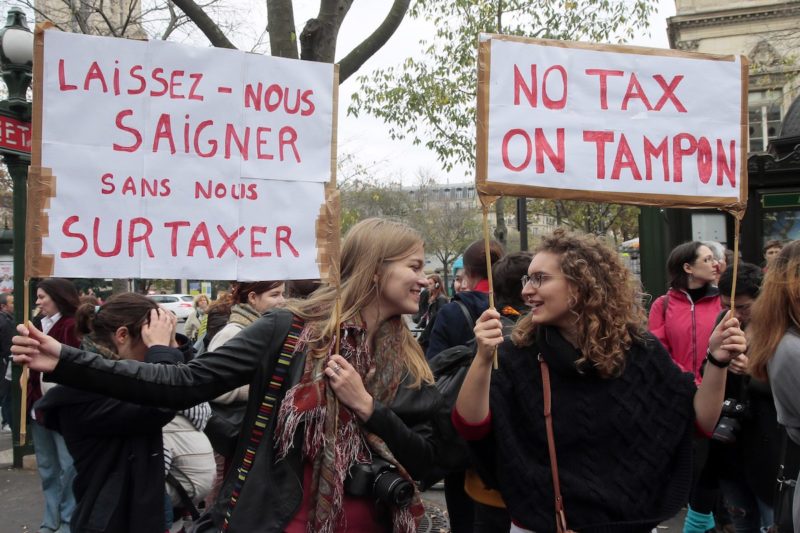 The movement to eliminate taxes on tampons and other sanitary products is global. During a 2015 rally in Paris, a woman holds a French-language sign reading "Let us bleed without overtaxing us." Jacques Demarthon/AFP/Getty Images

As any woman will tell you, the “pink tax” is for real. Just take a stroll through your local drugstore.

Shampoo marketed to women (think pink, flowery designs) can cost an average of 48 percent more than those sporting navy blue packaging. And it’s not just personal hygiene care: Women’s jeans are 10 percent more expensive, and dry cleaning bills for women’s shirts run an average of $4.95 as compared to $2.86 for men’s.

A new report from the U.S. Government Accountability Office (GAO) confirms that products targeting women consumers cost more than the men’s equivalent a whopping 50 percent of the time.

U.S. Rep. Carolyn Maloney (D-NY) also released a report this week—Earn Less, Pay More: The State of the Gender Pay Gap and ‘Pink Tax’ in 2018— echoing the GAO findings. It wisely calls out the “tampon tax,” the government surcharge that exists in the 36 U.S. states that do not classify menstrual products a necessity and, therefore, do not exempt them from sales tax.

Yes, yet another way the U.S. economy manages to bleed women dry at every turn.

The good news is that the fight to ax the tampon tax has a global groundswell of support. Just yesterday, the Malaysian government announced it will lift the sales and service tax of up to ten percent on menstrual products. Earlier this summer, India did the same for its 12 percent tax. Canada eliminated its national goods and services tax on menstrual products in 2015. And, in Kenya, the fight was won more than a decade ago: In addition to being the first nation in the world to cease taxing menstrual products in 2004, the East African nation also ended an import duty on pads in 2011, helping to further reduce the costs for women and girls.

But the conversation about the economics of menstruation must go further than the tampon tax. For those who can’t afford or access menstrual products at all, the outcomes can be dire. Nearly one in five U.S. children live in poverty, yet tampons and pads—as much of a classroom necessity as pencils and paper—are rarely provided in school restrooms. Those experiencing homelessness may resort to using discarded newspapers, socks, paper towels, or plastic bags. Incarcerated individuals are often left to beg or bargain with corrections staff for pads, part of a degrading and dehumanizing power imbalance.

Activists and policymakers have begun to address this plight in the name of menstrual equity–arguing that in order to have a fully equitable and participatory society, our laws must guarantee menstrual hygiene protocols and products that are safe and available for all who need them.

In 2016, New York City became the first jurisdiction to pass a trio of menstrual equity laws, the most comprehensive legislation of its kind in the world. The farthest sweeping of the three requires the city to make tampons and pads freely accessible for 300,000 public school students in grades 6 through 12. The second provides a budget for all shelters overseen by the Department of Homeless Services and the Department of Health and Mental Hygiene to provide free menstrual products to approximately 23,000 residents. And finally, another eliminates the cap on the number of pads given to women in custody of the Department of Correction, which had previously amounted to about a dozen thin, unabsorbent pads per period.

Similar reforms are gaining traction across the country. Provision of tampons and pads in public schools is now the law in California, Illinois, and New York. Many more have taken up the cause for those who are incarcerated: Colorado mandated funding in its budget for tampons in state prisons starting in 2017; Connecticut, Kentucky, Maryland, New York, and Virginia passed laws mandating that prisons and local jails provide free menstrual products; and Arizona does so by a Department of Corrections rule after legislation stalled in 2018.

Even Capitol Hill is taking a stand. Last summer, the Bureau of Prisons issued an annual guidance that tampons and pads be freely provided in all federal correctional facilities. It will possibly have more teeth soon: In May 2018, the U.S. House passed prison reform legislation, the FIRST STEP Act, introduced by U.S. Rep. Doug Collins (R-GA), with a wide array of sponsors (ten Republicans and nine Democrats), which specifically includes a menstrual access provision. The bill is expected to be taken up by the Senate later this year.

Most recently, the Restoring Access to Medication and Modernizing Health Savings Accounts Act of 2018, sponsored by U.S. Rep. Lynn Jenkins (R-KS), passed in the House. It would allow menstrual products to be covered as a qualified expense by flexible spending and health savings accounts, repealing the limitation otherwise im———posed by the IRS’s current (mis)classification of menstrual products.

Rep. Maloney’s report rightly emphasizes that the insidious pink tax points to the need for national policies that would help ensure gender equality—including and especially a national Equal Rights Amendment. States Maloney: “The ERA would mean that women would no longer have to fight the pink tax product by product, or fight the gender pay gap job by job or employer by employer, and it would solve intractable problems that a piecemeal approach cannot.”

The fight for menstrual equity falls squarely in this category. And it provides a smart stepping stone for future political discourse and debate around the ERA. Already Republican and Democratic lawmakers alike have shown they agree that the economics of menstruation matter—and that good policy can help ensure that the cost of periods does not pose a barrier to obtaining an education or participating fully and productively in civic life.

Ultimately, menstrual equity is about acknowledging that when half the population stands to be held back in such a way, all of society suffers as a result—an argument truly at the heart of the fight for gender equality.