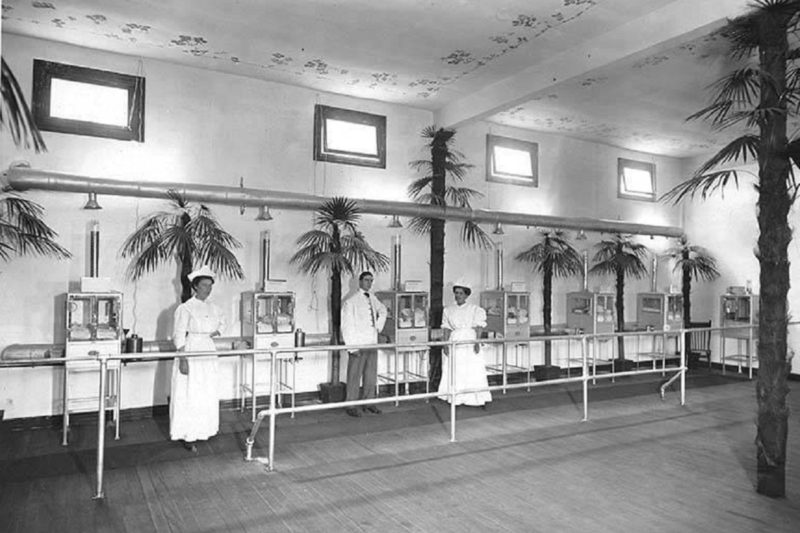 A baby incubator exhibit was a featured at attraction the Alaska-Yukon-Pacific Exposition in Seattle in 1909. University of Washington Libraries. Digital Collections

In the summer of 1933, barkers at the Chicago World’s Fair screamed, “Don’t forget to see the babies!” and lured visitors to a pavilion with nurses and rows of incubators containing very small infants.

People were both repelled and intrigued. How could one show off fragile babies at a fair? But some were “cooing in Martin Couney’s sideshow on the midway” in Chicago. They were intrigued by a large “Infant Incubators with Living Babies” sign, “so big you’d have to be dead to miss it,” writes journalist Dawn Raffel in her new book, The Strange Case of Dr. Couney: How a Mysterious European Showman Saved Thousands of American Babies.

Martin A. Couney was unknown to me until 2011 when I first began to conduct research on premature infants in the United States. It became clear that his story was an integral part of the development of neonatology as a medical field and what ultimately became neonatal intensive care units (NICUs).

Why was Couney so important? Because he marketed one of the foundational pieces of technology around which NICUs have been organized: incubators, a mainstay of premature infant care, which were actually invented in Europe in the mid- to late-1800s.

The only thing about this story, though, is that the premature babies did not receive their care in a hospital setting. They were part of sideshows at Coney Island for decades and various world’s fairs, which also often displayed exotic animals, indigenous people, international “villages,” and various forms of innovative technology.

Raffel shows us that progress does not always emerge in the most legitimized of spaces, such as hospitals. Couney’s brashness and chutzpah filled unmet needs in an unlikely place and sometimes yielded extraordinary outcomes.

Using a diary-entry approach, the author tells a mostly successful and mostly chronological story of Couney from his obscure origins to his “performances” at world fairs and parks around the globe; her account fumbles during nonchronological forays into her research process, discoveries of information, and happenstance meetings with people who knew Martin Couney—interludes that disrupt her narrative and could have been well-placed in an introduction.

But as Raffel draws from historical documents and interviews with Couney’s relatives—and even adults who were premature infants featured in his sideshows—she untangles the web of mystery surrounding Couney’s origins and how he became involved in saving premature infants before there was specialized medical care for them.

Given that neonatal care has become a medical speciality, you would assume that saving babies would be the purview of a doctor. You would be forgiven for thinking that Couney was one, yet he was not a doctor. In the annals of history, Couney is identified as a physician-showman and is often thought to have first showed infants at the 1896 Exhibition in Berlin. According to Raffel, that too was unlikely.

Michael Cohn was born in Poland, but reinvented himself as Dr. Martin A. Couney in the United States. Couney traveled and set up elaborate incubator shows all over the country, but the most enduring was the one at Coney Island in 1903.

Credentials aside, Couney was ahead of the medical field, developing the care of infants born too early. In the 19th century, premature infants were of little interest to the general public. Neither doctors nor society were that interested in the well-being of premature infants who were typically viewed as “weaklings.” In truth, their apparent lack of interest probably derived from the fact that little could be done to save infants who were born weighing less than 4 pounds.

But as children became increasingly important to the nation’s identity—because infant and maternal mortality rates marred the country’s perception of itself as a “civilized” nation—saving premature infants became part of the national agenda. Saving babies and mothers, especially white infants, was the focus of the Children’s Bureau, which was the first federal organization designed to address the needs of infant and children health in 1912. The role of the Children’s Bureau is a well-known one, closely bound to various forms of legislation such as the Sheppard-Towner Maternity and Infancy Act of 1921 that provided federal funding to help stem the tide of infant and maternal deaths in the 1900s.

Couney’s entrepreneurship stood alongside an approach to caring for premature infants that became de rigueur. One of the first to implement a structured approach to premature care, Couney required a sterile environment for the infants. Moreover, the incubators’ temperatures were controlled to facilitate physiological development. He employed wet nurses for those infants who were able to be breastfed; for those who were not, his staff utilized a special method of nasal feeding, developed in France, for infants whose esophagi were underdeveloped. These techniques were crucial given that some babies were as small as 8 ounces.

Because of his successes, parents brought their premature infants to the sideshows for free care that was not found in hospitals. Ultimately, nearly 7,000 premature infants were under Couney’s care in the spotlight of midways, fairs, and sideshows, most for a couple of months, others longer. They probably wouldn’t have lived otherwise because Couney paid attention to infants that even the medical profession did not view as worthy of care. And since premature birth was a primary cause of infant mortality in the early 20th century, even children in Couney’s care faced high chances of death.

Among the infants who did survive was Anna Rasmussen. Couney collaborated with physician Julius Hess, among the first U.S. doctors to open a premature infant unit at a hospital. According to Raffel, because of Couney’s baby unit at the Panama-Pacific International Exposition in San Francisco in 1915 and his work with Hess, struggling Danish immigrants Karen and Peter Rasmussen “put the newborn in a shoebox. And then they rode the streetcar to the fair,” handing their baby over to Couney’s wife and assistant, Maye. Baby Anna weighed slightly more than a pound.

Raffel found Anna’s daughter-in-law on Facebook, confirming that Anna had survived. The baby in a shoebox ultimately lived to 80 and gave birth to three living babies and one stillborn.

Like the Rasmussens, some who brought their infants to Couney were European immigrants. But it’s also worth noting how little Raffel discusses how much access people of color had to his treatments, especially with glaring historical disparities and the current moment where there is increasing alarm about high infant mortality in Black communities. According to at least one historian, the infant mortality rate among whites was 96 deaths per 1,000 births in 1910. For Black infants, the rate was 143 per 1,000 infants, according to 1910 estimates.

Given the time, segregation of health-care facilities was the norm, but photos and newspaper accounts show that Black and Asian American children were also in Couney’s incubators. In fact, Raffel writes that Couney was not concerned with the infants’ race or class. However, as Raffel notes, no parents of color were quoted in media reports. But since she offers other important context, one wonders if some attention could have been paid to the dire situation Black and other infants of color faced during the time of Couney’s sideshows. This could have helped readers better understand the racial dimensions of premature birth then and now. For, while those horrific rates of infant death decreased over time, the racial disparity in infant death has remained consistent to the present.

Couney’s legacy lives on—in the descendants of infants he saved, his popularization of neonatal care, and how he capitalized off growing hopes for children’s survival. An expert promoter, Couney prospered from his baby-saving project. Similarly, since the 1990s, NICUs have often been the most profitable specialty care component of a hospital. According to ethicist and medical scholar John Lantos, economics has driven the construction of NICUs for the financial benefit of medical centers.

There are consequences to saving premature babies through income-generating NICU technology, particularly for the newborns and mothers of color who have the highest rates of premature birth. Namely, prevention efforts—including decreasing cesarean sections, reducing the rates of labor induction, providing greater access to birthing centers, and most importantly, addressing medical racism that places Black women at risk—are not as valued as technological interventions.

The Strange Case of Dr. Couney: How a Mysterious European Showman Saved Thousands of American Babies is a fascinating read that demystifies how much of premature infant care unfolded in the United States. At the same time as it explains how Americans became concerned about infant health, it omits how premature infancy is a racialized health disparity. The strength of the story that Raffel does tell and the gap left by the one she doesn’t should encourage readers to learn more about the multifaceted and complex history of saving babies.