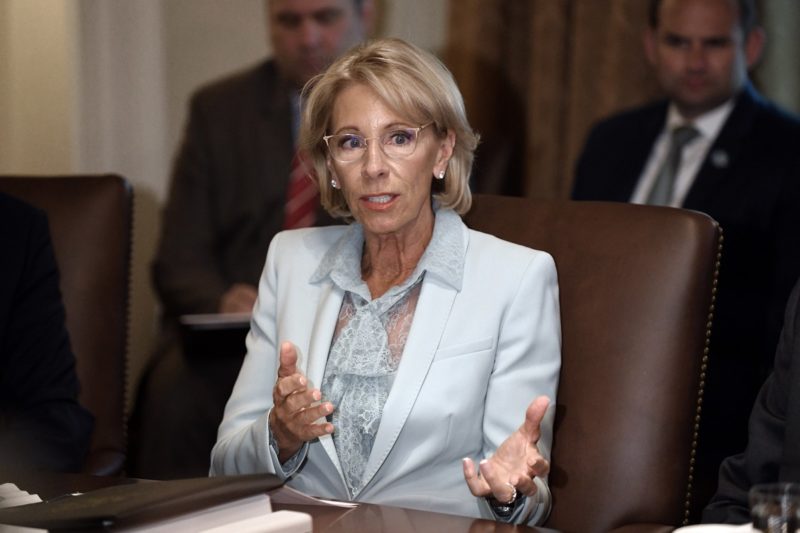 In her remarks on Title IX last September, Education Secretary DeVos claimed that the Obama-era guidance was responsible for several due process “failures,” including schools hiring untrained adjudicators and suspending a student without informing him of the allegations against him. Olivier Douliery-Pool/Getty Images

Until last month, I worked at the U.S. Department of Education’s Office for Civil Rights (OCR). I developed policy and guidance interpreting Title IX, the federal civil rights law that prohibits sex discrimination, including sexual harassment, in schools.

Considering the policies and statements that have come from this president and administration, it shouldn’t be a surprise that I’ve heard a Trump appointee referring sympathetically to students accused of sexual harassment as “victims,” as in so-called “victims of an unfair process.” I don’t recall a time, however, when he, or many of the other Trump appointees, for that matter, expressed such empathy for survivors of sexual harassment. All of this indicated to me that Secretary Betsy DeVos and the new administration were prioritizing the rights of accused students instead of protecting the civil rights of all students.

The truth is, there is no inherent conflict between ensuring a fair process for survivors and a fair process for alleged perpetrators. For the record, when we advocate that schools be trauma-informed in responding to sexual violence and that schools stop and prevent sexual harassment, we are not asking the school to take away due process rights. It’s possible to advocate for both a fair process for all students and the safety of survivors of sexual violence. Take cross-examinations, for example, where institutions could ensure a fair process by allowing parties to submit questions to each other through hearing panels or investigators, yet still protect the safety of survivors by not permitting direct questioning by the accused student.

To highlight a recent case, a federal court last month held that the University of Michigan had violated an accused student’s due process rights to a live hearing and an opportunity to question the woman who filed the complaint against him. In doing so, the court “consider[ed] the emotional harm and trauma” to survivors of being directly questioned by their rapists. It concluded that the accused student had a right to question the woman who filed the complaint, but could only do so by submitting his questions to the student resolution panel or other school administrators, who would then ask the questions on his behalf.

The federal court’s decision, which balances both parties’ interests in fair process, is supported both by civil rights and survivors’ advocates like the National Women’s Law Center (where I work) and by so-called “men’s rights activists.” It also aligns perfectly with Obama-era guidance on sexual violence.

Unfortunately, this administration has promoted the fallacy that the 2011 and 2014 Obama-era guidance did not ensure a fair process. This false narrative is being used to justify rescinding that guidance and giving special rights, like one-sided appeal rights, to accused students. In fact, in her remarks on Title IX last September, Secretary DeVos claimed that the Obama-era guidance was responsible for several due process “failures,” including schools hiring untrained adjudicators and suspending a student without informing him of the allegations against him.

In reality, the Obama-era guidance explicitly required OCR to enforce Title IX in ways consistent with federally protected due process rights. It also required all investigators and adjudicators to be adequately trained or experienced in handling sexual violence complaints. And it prohibited schools from disciplining students unless they had been given enough information to respond to the allegations against them.

That the secretary of education does not understand how the rescinded guidance addressed the very failures she claimed were caused by the guidance is concerning. I spent most of my last year at OCR trying to educate senior political appointees on how Title IX applies to sexual harassment. But since I didn’t subscribe to the false dichotomy between protecting survivors of sexual violence and ensuring due process for alleged perpetrators, I’m not sure what impact I had, if any.

It seems that Secretary DeVos and other Trump appointees within the department preferred to listen to extremist organizations, many of which have been labeled as hate groups and trolls due to their use of victim-blaming rhetoric, unsubstantiated claims about false accusations, and other misogynistic tactics. For example, Stop Abusive and Violent Environments (SAVE) claims that restraining orders for victims of domestic violence infringe on the “right to privacy in family matters.” Another group, Families Advocating for Campus Equality (FACE), equated the experiences of falsely accused men to that of rape survivors. The president of the National Coalition for Men even defended former NFL player Ray Rice, who knocked his then-fiancée unconscious, arguing, “But if she hadn’t aggravated him, she wouldn’t have been hit.”

It’s frightening that extremist individuals and organizations like these have access to Secretary DeVos and senior Trump appointees to advise on how Title IX applies to sexual violence in schools. This is why I’m worried about what the department will propose in its upcoming Title IX regulations this September—regulations that are likely to roll back more protections for survivors and grant more special rights to alleged perpetrators.

We must fight back this fall. The public comment process allows anyone—students, parents, teachers, advocates—to comment on proposed regulations. Make it clear to Secretary DeVos that you support strong Title IX regulations that protect all students and a fair process that doesn’t give special rights to accused students.