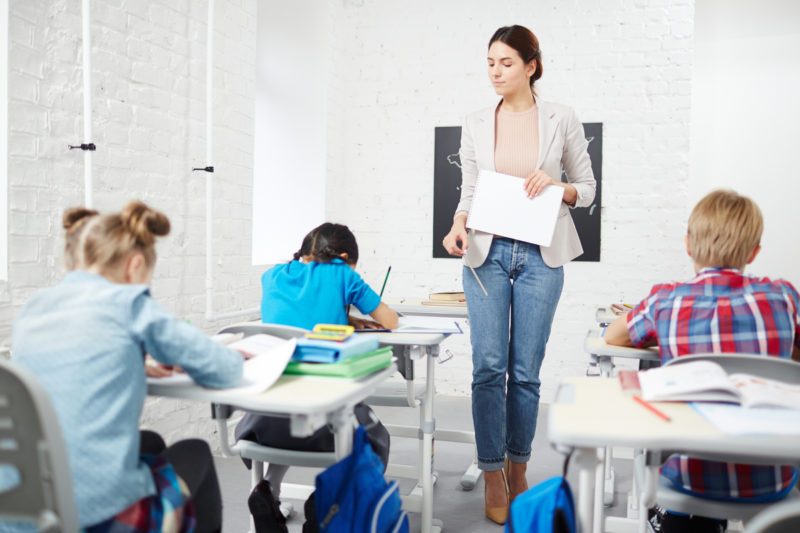 A 2015 survey by the National Center for Transgender Equality found that 77 percent of students who were out or perceived as transgender at some point during school (K–12) experienced some form of mistreatment because people thought they were transgender. Shutterstock

A Recipe for Disaster and More Gender Policing

If Republican lawmakers Tom Brinkman and Paul Zeltwanger have their way, schools will be required to inform a student’s parent immediately if the child shows any signs of being transgender.

The two Ohio house members introduced a HB 658, a bill that says that any public entity that is caring for or supervising children must inform each of a child’s parents or guardians if that child displays any “symptoms of gender dysphoria or otherwise demonstrates a desire to be treated in a manner opposite of the child’s biological sex.” Teachers are forbidden from providing the child with any information about sex or gender until they have made this notification and gotten consent from the parents.

This bill is dangerous to transgender young people who are already a vulnerable population. A 2015 survey by the National Center for Transgender Equality found that 77 percent of students who were out or perceived as transgender at some point during school (K–12) experienced some form of mistreatment, “such as being verbally harassed, prohibited from dressing according to their gender identity, disciplined more harshly, or physically or sexually assaulted because people thought they were transgender.” Asking schools to police gender conformity could only serve to make this situation even worse.

More importantly, informing parents of their child’s gender nonconformity or perceived gender nonconformity may put that child at immediate risk in their own home. In the 2015 survey, 10 percent of those who were out to their immediate family reported that a family member was violent toward them because they were transgender. Eight percent were kicked out of the house because they were transgender.

The bill was apparently inspired by a case in which custody of an Ohio teen was granted to their grandparents because the parents wanted to stop hormone therapy. It includes a provision protecting parents who do not allow their children to receive treatment for gender dysphoria by saying that this refusal cannot be used in any future custody decisions.

The bill had a committee hearing but hasn’t been referred to the full floor yet. Ohio’s legislative session does not end until December, so there’s ample time for this to reach the chamber for a vote.

Are Trans Women at Higher Risk of Blood Clots and Stroke?

Results from a new study published in the Annals of Internal Medicine suggest that trans women, especially those who take estrogen therapy, are at increased risk for blood clots and strokes. The authors stress that these results are not a reason for anyone to stop estrogen therapy but see them as proof that we don’t know enough about trans women’s health and we can’t necessarily rely on research done with other populations of women.

Researchers reviewed electronic medical records of patients at Kaiser Permanente sites in Georgia and California and identified 2,842 trans women (assigned male at birth but transitioned or transitioning to female). The study looked at the medical care they received between 2006 and 2014 beginning with the first evidence of their transgender status. The group was then compared with more than 48,000 cisgender men and over 48,000 cisgender women.

VTE refers to clots that prevent blood from freely flowing through the body. The two types of VTE are deep vein thrombosis (DVT), which usually occurs in the legs, and pulmonary embolisms which occur when a DVT dislodges and travels to the lungs. An ischemic stroke happens when an artery taking blood to the brain is blocked. If it remains blocked for more than a few minutes, brain cells can die. While these conditions can be treated, if not caught early, they can be life threatening.

Hormone replacement therapy (HRT) for postmenopausal women has been known to increase risk of both blood clots and strokes, but the authors of this study explain that the pattern seems very different for trans women. In HRT studies, risks for postmenopausal women went up very fast and plateaued or even fell after five years. In this study, the risk for trans women on estrogen went up after two years but continued to increase after six years.

The researchers believe that the main takeaway from this study is that previous research on women cannot be used to assess medical care for trans women. Michael Goodman, a researcher at the Emory University School of Public Health and co-author on the study, told Medscape Medical News: “Up until now, these inferences were made because people didn’t have any relevant data. [Trans women] are simply a different population, so in my view, these inferences are not warranted.”

Goodman emphasized, however, that these results demand more research so that trans women can receive the safest possible care.

The Top Google Health Searches by State, at Your Fingertips

These days when we have a question about our health, we are much more likely to turn to Dr. Interwebs than call our own doctor who might take hours, if not days, to get back to us. The sites we find may answer all of our questions or just fuel our hypochondria, but the questions we ask are as interesting as the answers.

Each year, Medicarehealthplans.com, a provider of supplemental insurance, analyzes Google health searches to determine the issues most on our minds. This year’s survey shows that across the United States, we have a lot of questions about sex.

Sexually transmitted infections (STIs) are at the top of the list in many states. Syphilis was the most common search in California, Colorado, Georgia, Illinois, Ohio, and Pennsylvania. The top-searched topic in our nation’s capital along with Florida, Louisiana, and Oregon was HIV/AIDS. People in Mississippi wanted to know about genital herpes.

The STI epidemic is intensifying in this country with most states seeing higher rates than ever before. So it is not surprising that Americans across the country are going online to find more information.

But we here at This Week in Sex would like to remind you that not all web-based sources are equal; some are the online equivalent of the scary STD slideshow from abstinence-only programs. If you need information about STIs, we would recommend going straight to the Centers for Disease Control and Prevention, which produces easy-to-read fact sheets on the most common STIs.

Other sexual health topics that took top spots included endometriosis (No. 1 in Arkansas), and Alaskans wanted to know about urinary tract infections (UTIs) more than any other search item. For these issues, we go to the National Institutes of Health (which has a good page on endometriosis) and the Mayo Clinic, which tackles most health issues, including UTIs.

We are sorry to say, however, that we don’t know how to help the people of Connecticut whose No. 1 health search term was for “quarter-life crisis.” We don’t know what that is. And we can’t understand how a state with the median age of 40.9 is suffering from it.