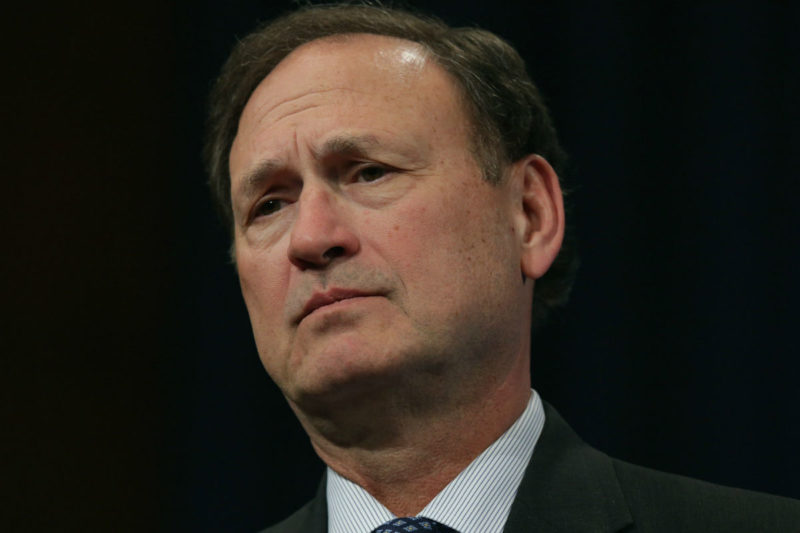 For many years, Justice Samuel Alito has been searching for a case that would allow him to eviscerate support for public unions. Chip Somodevilla / Getty

In the end, the only good thing that can be said about the U.S. Supreme Court’s decision in Janus v. American Federation of State, County, and Municipal Employees, Council 31 is that we knew what was coming. Conservatives on this Court—particularly Justice Samuel Alito—have been eager to bring about the end of public-sector unions for a long time. On Wednesday, they got their wish, effectively undermining the power of public-sector unions and calling the rule of law into question in one fell swoop.

The Janus case concerns public-sector union fees. Public-sector unions, as is the case with private-sector unions, impose dues upon their members. However, it is impermissible for them, and has been for over 40 years, to use those dues for political organizing. A case from 1977, Abood v. Detroit Board of Education, solved this problem in a logical and fair way. Those public-sector workers who didn’t wish to support a union’s political activities could “opt out” of paying full dues and instead pay only what came to be known as a “fair share” or “agency fee”—the portion of the union dues that went toward collective bargaining, such as working towards higher wages, increased job safety, and better benefits. That way, there’s no First Amendment violation because the fair-share members are not compelled to support the union’s political positions or goals.

That wasn’t enough for the appellant in this case, Mark Janus. Janus works for the Illinois Department of Healthcare and Family Services. He’s represented by the American Federation of State, County, and Municipal Employees (AFSCME). As a fair-share member, Janus only pays the portion of the dues that go toward organizing and negotiating. He had refused to join the union because he doesn’t believe in many of their policy positions. In a very odd twist, Janus also took umbrage at the union’s negotiating positions. In other words, he was angry that the union agitated for higher pay and better benefits for public sector employees, including, presumably, himself.

For many years, Justice Alito has been searching for a case that would allow him to eviscerate support for public unions. In Janus, Justice Alito found exactly what he was looking for: a plaintiff who agreed with his view that for public-sector unions, working to achieve better conditions and wages for workers is a political act. Once that congruence occurred, the result was inevitable—the conservative wing of the Court would find for Janus and strike down agency fees for fair-share members because they violate the First Amendment by compelling people to support the “speech” of the union.

That is exactly what took place. To get there, however, the Court had to get around the fact that they’d ruled exactly the opposite in Abood.

Justice Alito’s majority opinion Wednesday contends that the ruling in Abood became “unworkable” because it was difficult to distinguish between the types of expenses members would pay for versus those paid for by fair-share members. This flies in the face of the fact that unions are obliged to track and report such things in great detail. It isn’t some vague thing of mystery as to where money goes or how it is spent.

Alito also declared that Abood was “poorly reasoned” in part because it was addressing a different First Amendment question. This is an odd way to define “poorly reasoned” in that the Court will often address different sorts of questions, yet rely upon its previous decisions that may relate to those questions in some capacity. Indeed, under the principle of stare decisis—the notion that courts must uphold things they’ve decided in the past—it’s actually generally required to do so. In large part, that’s because we need continuity in court decisions to function. It’s called a “reliance interest.” For example, over 20 states have public sector laws that are predicated on the compromise fashioned in Abood. Those states relied upon the law in doing so, believing their arrangements to be constitutional.

But Janus throws stare decisis out the window. Alito even argues that states should have known better because they knew Abood was under attack. It’s impossible to overstate how odd a viewpoint this is. It’s akin to saying that no state should make laws about LGBTQ rights or abortion because those rights are always under attack at the courts.

Justice Elena Kagan’s dissent highlights how far afield from the normal course of action this decision is. She points out that “reliance interests do not come any stronger than those surrounding Abood. And likewise, judicial disruption does not get any greater than what the Court does today.”

Kagan also points out that it is the demise, not the existence, of Abood that really makes things unworkable. First, it destroys any sense of stability in the cash flow and resources of the union. Unions can’t effectively advocate for their bargaining positions if they have no idea how much money or member power they’ll have to do so. Additionally, if you tell people they can still have all the benefits of union representation, but they’re not obliged to pay to do so, you create what court cases dealing with unions call “free riders”—people who want those benefits but won’t pay for them. This, again, creates a cash flow problem. The union is now representing a large number of people that don’t support it economically.

But the worst part of the majority’s opinion, Justice Kagan notes, really is its utter disregard for stare decisis. Departing from settled law demands, according to the Supreme Court itself, a “special justification” that goes beyond just saying the previous case was wrongly decided. That’s simply not present here.

It isn’t exaggerating to say that this decision utterly undermines the rule of law, and not just for things related to unions. As Kagan notes, upholding previous decisions “fosters respect for and reliance upon” those decisions. It lets the nation know that the Court has integrity, and that it rules based on the law “rather than in the proclivities of individuals.” In Janus, however, the Court did just the opposite. It ignored the rule of law and substituted the long-held desire of Justice Alito (and the other members of the conservative wing of the court) to undermine public-sector unions and instead align with so-called right-to-work activists and states.

With Justice Kennedy’s retirement, it isn’t a stretch to look at a whole host of things that have been under attack for a long time—reproductive health, LGBTQ rights, and environmental laws, just to name a few—and realize that those hang by gossamer threads. More reliably conservative majorities will give the Court ample opportunity to overrule its past decisions simply because a majority of the current justices do not agree with them. That’s exactly the opposite of how it is supposed to work, and that’s exactly what happened here in Janus.