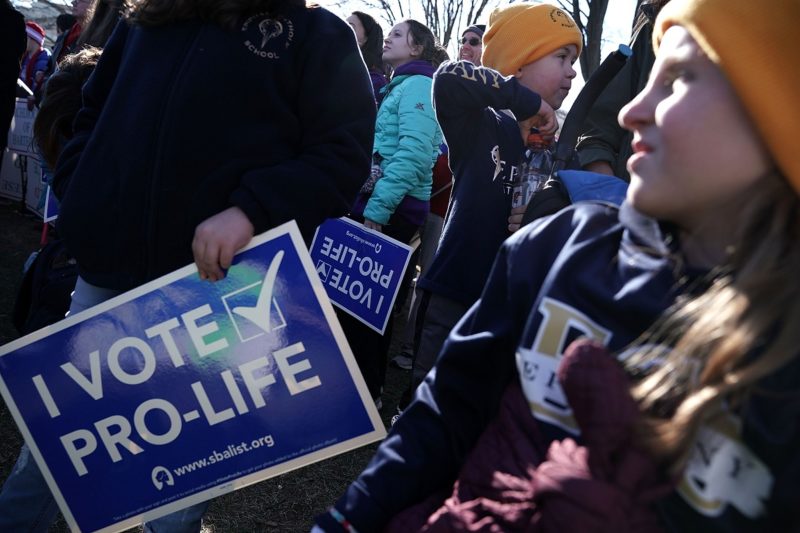 The bill would require the state Department of Health to develop and distribute educational and informational materials about pregnancy and abortion through public service announcements, including print and broadcast media. Alex Wong/Getty Images

Rewire.News tracks anti-choice and anti-LGBTQ legislation as it works its way through the states. Here’s an overview of bills we’re watching.

Louisiana lawmakers wrapped up their regular session this week by passing a slew of abortion restrictions, Ohio wants to establish an “abortion-free society,” and legislators in Minnesota became the latest to propose an unconstitutional six-week abortion ban.

Wednesday, the Louisiana house voted to unanimously approve SB 325, which would allow the state to suspend or revoke the license of any abortion clinic that falsifies or destroys patient records; or for completing any records or forms in advance of patient visits with patient-specific data or a physician’s signature. In the opposite chamber, the state senate agreed Thursday to final house markups to SB 534. If signed, the law would prohibit coerced abortion and define criminal abortion and feticide as “crimes of violence.”

The senate voted 24-1 on Wednesday to forward SB 181, a ban on abortion after 15 weeks of pregnancy, to the governor’s desk. Gov. John Bel Edwards, an anti-choice Democrat, is expected to sign the bill. If signed, the law would take effect only if a similar ban in Mississippi is upheld by the courts. Relatedly, the state legislature passed a concurrent resolution requesting the state’s attorney general file an amicus brief in federal court to support Mississippi in their litigation efforts to ban abortion after 15 weeks’ gestation.

And finally, the house agreed with the senate’s amendments to HB 891, a targeted regulation of abortion providers (TRAP) measure which seeks to further isolate facilities that provide abortions with unnecessary restrictions. If signed, the law would prohibit the Louisiana Department of Health from entering into a Medicaid provider agreement with any entity that is prohibited from receiving certain public funding for abortion-related reasons. The law would require each licensed abortion facility’s location to be physically and financially separate from any facility where publicly funded Medicaid services are provided.

Last weekend, Gov. Jeff Colyer (R) signed the Kansas Telemedicine Act (HB 2028). The law defines telemedicine and telehealth and would require that insurers reimburse at the same rate whether a patient visited a doctor in person or received care remotely. Thanks to lobbying efforts by anti-choice group Kansans for Life, the law prohibits abortion care via telemedicine and instructs the entire law to be nullified in the event that a court strikes down the abortion ban clause.

The Minnesota State Legislature last week passed SF 2849, a bill requiring physicians to offer pregnant people the option to view an ultrasound prior to the performance of an abortion. Gov. Mark Dayton (D) vetoed the measure on Wednesday, stating it “interferes with the doctor-patient relationship, legislating the private conversations that occur about a legal medical procedure.”

In spite of this, Republicans in the state house introduced a bill on Thursday that would ban abortion as early as six weeks of pregnancy, before many know they are pregnant. HF 4524 would prohibit the performance of an abortion from the time a fetus has a detectable heartbeat, except in the case of a medical emergency. The bill is similar to Iowa’s heartbeat abortion ban (SF 359), also known as a total abortion ban, which was signed into law this month and faces a legal challenge. Fetal heartbeat laws seek to ban abortion months before the point at which a fetus is viable. As Roe v. Wade legalized abortion to the point of viability, similar laws have been ruled unconstitutional in Arkansas and North Dakota.

Lawmakers in South Carolina are quietly considering a discriminatory anti-LGBTQ adoption measure similar to one in Oklahoma and another awaiting signature in Kansas. The provision, which is hidden in a giant budget bill, would allow child-placement agencies to refuse to provide service that conflicts with a “sincerely-held religious belief or moral conviction.” The appropriations bill first passed the state house in March, and while further budget negotiations have been temporarily postponed, the section that includes the discriminatory adoption clause has been approved by the state senate.