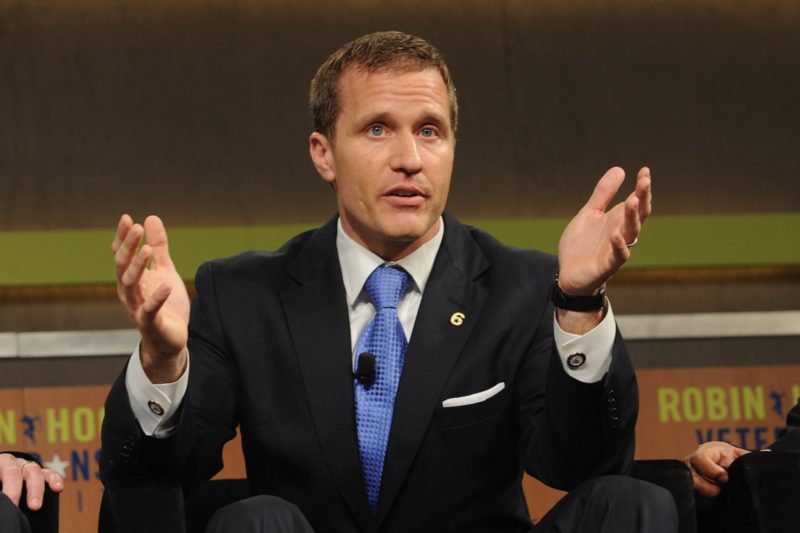 Not only does the Greitens investigation reveal how often women's trauma is exploited, it also illustrates how often men in power gaslight women. Craig Barritt/Getty Images for The Robin Hood Foundation

The scandal involving Missouri Gov. Eric Greitens broke in January, when KMOV St. Louis obtained access to a recording in which an unnamed woman described a 2015 affair with the the governor. The recording, made without her consent and released against her will by her ex-husband, also contained allegations of blackmail.

The day after the KMOV story broke, the governor admitted to having an affair with the woman but denied any allegations of blackmail. In February, St. Louis Circuit Attorney Kim Gardner recommended Greitens be indicted on a charge of invasion of privacy; after a grand jury indicted him, Judge Rex Burlison on April 19 ruled that the case should move forward.

Greitens has continued to deny these claims and has repeatedly attempted to undermine Gardner’s credibility, saying, “The people of Missouri deserve better than a reckless liberal prosecutor who uses her office to score political points.” In mid-April, a bipartisan Missouri house investigation uncovered even more disturbing details of Greitens’ alleged sexual assault of the same unnamed woman.

As a Missouri woman, I find Greitens’ alleged actions egregious, but not surprising: Men in power have used said power to abuse women for millennia. And Greitens’ specific case exemplifies the systemic ways in which women’s trauma is exploited for entertainment and political gain.

The Greitens investigation is deeply troubling on many fronts. Not only was the woman victimized through Greitens’ alleged sexual abuse; she was victimized for a second time when her ex-husband released the private recordings. The media has exacerbated this pattern: In December 2017, a reporter booked an appointment at the hair salon where the woman worked. In a March 7 hearing before a special committee of lawmakers, the woman described that December conversation with the reporter, saying, “And I just started crying. I said, ‘No. No, you do not understand how traumatic this whole thing is. I cannot go there. My ex-husband is so, so vindictive, he wants to hurt me so bad.'”

During the same March 7 hearing, the woman testified that her ex-husband sent her threatening text messages during Greitens’ 2016 run for governor: “‘You have coming to you what you deserve. I can’t believe people don’t see behind, you know, what you’ve done …. If this POS gets into office, this is absolutely insane, he doesn’t deserve this, just wait.'”

Obviously, Greitens’ alleged actions deserve consequences, but the fact that the woman’s ex-husband, according to her testimony, recorded their private conversation without her knowledge and then wielded those tapes to gain personal revenge is unacceptable. The media, too, has disregarded the woman’s desire for anonymity and has repeatedly published her name. Women deserve the space to heal in privacy and in peace.

Not only does the Greitens investigation reveal how often women’s trauma is exploited, it also illustrates how often men in power gaslight women. The initial story broke after the woman claimed that Greitens blindfolded her, took a photo of her, and then used that photo to blackmail her into silence. Now that the story is public, Greitens is denying all claims; instead, Greitens’ defense attorneys are claiming that the woman must have had a dream or a vision and that the details of the alleged encounter with the governor are a figment of her imagination. Despite an increasing amount of evidence presented to the court, the governor has called the investigation a “witch hunt” in an attempt to discount her story.

While gaslighting is a term drawn from a 1938 play in which a man drives his wife to madness through emotional manipulation, the strategy is centuries-old. There are dozens of reasons why women don’t come forward with their stories, and gaslighting is among them. Why did it take nearly 60 women to accuse Bill Cosby of assault before the story received national attention? Because we, as women, are routinely made to question ourselves, our sanity, and our stories. When Cosby accuser Kristina Ruehli came forward in 2014, Cosby’s lawyer described her claims as “unsubstantiated, fantastical stories.” That same year, Ruehli described the psychological effect this gaslighting had on her: “I felt like I had a big red ‘L’ [for liar] painted on me.”

It also proves what we already know about men who seek to heavily legislate women’s bodies: “Pro-life” is often simply a synonym for anti-woman.

Since his election in 2016, Greitens has launched a personal assault on Missouri reproductive health care and is actively dismantling the constitutionally protected rights to abortion. Last summer, he forced Missouri legislators to hold a special session on abortion that cost taxpayers over $130,000. He signed SB 5, which made national news for the 30-plus pages of unnecessary and dangerous targeted regulation of abortion provider (TRAP) laws it included. There are currently 26 egregiously anti-choice bills moving through the Missouri legislature. The governor is sure to back each of them.

Republican politicians like Greitens legislate our reproductive systems in order to control us and to exert their power over our bodies. When Greitens ran his campaign on a supposed “pro-life” platform,” it should have been clear then that he had a proclivity for telling women what we can and cannot do. Now that these allegations have surfaced, this correlation is grossly apparent. Greitens’ anti-woman legislation aligns perfectly with his alleged anti-woman actions.

As of April 20, Greitens has been charged with a second felony—this time, computer tampering. Top state Republican lawmakers are calling for Greitens’ impeachment. But it should not end there: Too often, the anti-woman actions of politicians are discarded as personal scandals and isolated incidents. The moment cases like these close, the public quickly moves on to the next scandal.

The Greitens investigation is not an isolated incident, nor is any aspect of it particularly unusual; this is precisely why we should be talking more about it. Along with so many stories of the #MeToo movement, it can help us recognize the specific strategies used by men in power to oppress and silence others.

When women’s stories are discarded, their narratives manipulated, we should call this what it is: gaslighting.

When politicians claim to be “pro-life,” we should recognize that this is actually just an excuse to control our bodies.

Instead of letting the Greitens story become old news, as so many scandals do, I hope the investigation will ignite an ongoing conversation about the political weaponization of women’s trauma, the gaslighting of women, and the abusive tendencies of anti-choice politicians.